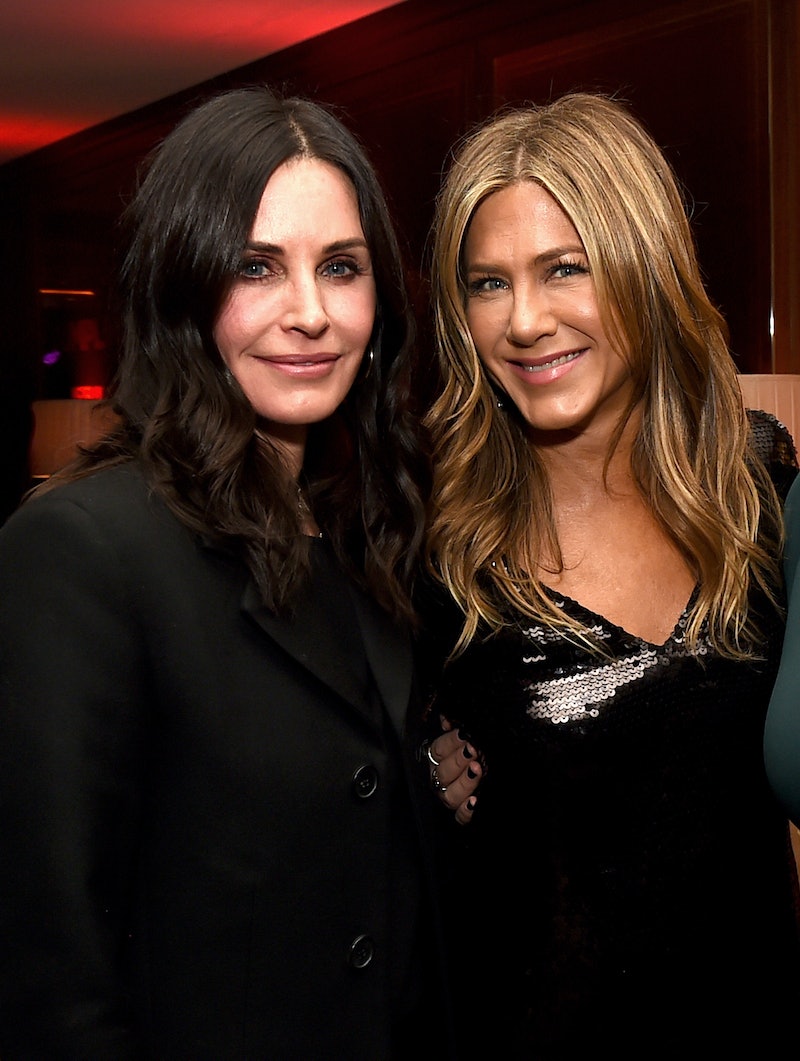 In the era of reboots, reunions, and revivals, nothing is off limits — and that just might include the gang from Central Perk. During her Wednesday, June 5, appearance on The Ellen DeGeneres Show, Jennifer Aniston said she would do a Friends reunion. While Rachel Green may be all that some fans require, Aniston also said that she thinks the rest of her fellow cast members, Courteney Cox, Lisa Kudrow, Matt LeBlanc, Matthew Perry, and David Schwimmer, would all be down to reprise their beloved sitcom roles as well. Since ending its 10-season run in 2004, the Friends cast has often been asked if they'd do a reunion, and while it always seemed unlikely, Aniston has just given the world a reason to believe that it might just see Rachel, Monica, Phoebe, Joey, Chandler, and Ross unite one day.

Aniston was on her real-life friend's talk show on June 5 to promote her Adam Sandler Netflix film Murder Mystery and her upcoming Reese Witherspoon Apple TV+ series The Morning Show. But DeGeneres couldn't pass on the opportunity to demand that Aniston and company do a Friends reunion. "Ohhhkay," Aniston somewhat reluctantly replied. But when DeGeneres asked, "Why not?" the Rachel star softened some more. "I know, why not? You know what, because, listen, I've told you this. I would do it."

Over the years, the cast members have reunited for a number of projects and social engagements — like Aniston's birthday, each other's TV projects, and to honor Friends producer James Burrows. But a legitimate revival of their onscreen counterparts has never gone down, despite incessant pestering. Aniston herself has gotten creative with giving answers to the oft-asked reunion question by suggesting not once, but twice that the reunion should take place when they're really old. But her latest response seems more promising and echoes what she said on The Ellen Show back in February 2018. "Anything is a possibility, Ellen," she said. "I mean, George Clooney got married." So even then, she left the door to Monica's apartment open.

Unfortunately, while Aniston claimed the whole cast would be willing, a reunion is not something that the creators of Friends — David Crane and Marta Kauffman — want. In a March 2019 interview with Rolling Stone, Kauffman confirmed her anti-reunion views and explained her reasons for not doing one. "One, the show is about a time in your life when your friends are your family. It's not that time anymore. All we'd be doing is putting those six actors back together, but the heart of the show would be gone," Kauffman said. "Two, I don't know what good it does us. The show is doing just fine, people love it. [A reunion] could only disappoint. "The One Where Everyone's Disappointed."

Even still, there's no denying that Aniston's most recent reunion stance will give fans more hope than ever before. Combine that with her impending return to TV with The Morning Show and the fact that it's the era of the revival and a Friends reunion definitely doesn't feel DOA anymore.