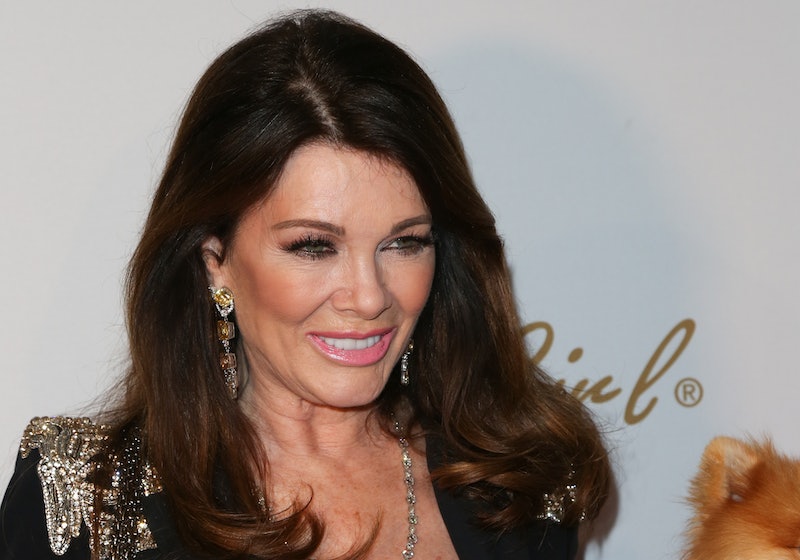 Real Housewives Of Beverly Hills Season 9 is about to come to a close, and with it, one of its longest-running cast members will be saying goodbye, too. Lisa Vanderpump skipped the RHOBH Season 9 reunion taping and then unceremoniously announced she was quitting the show, too. Ouch.

All of the Real Housewives Of Beverly Hills drama started this season because of one mangy mutt — Lucy Lucy Apple Juice, a dog that Dorit adopted from Vanderpump Dogs and then gave away instead of just giving it back to the shelter because it was incompatible with her family. That is what most breeders and shelters would prefer you do, so they can re-home the dog, but alas, Dorit did not, for whatever reason.

Afterwards, Lisa reportedly told Teddi, who does not get along with Dorit, this story before taping began, in order for the newcomer to stir up some drama for the show. Then there was a rumor that LVP gave a story to a tabloid about it all so that she could stir the pot without being totally implicated — or so the women say. That's really the crux of the drama; Lisa has allegedly been doing this sort of nonsense for years on Real Housewives Of Beverly Hills, and the other women are just plain sick of it.

Rather than pay the piper or admit wrongdoing, Lisa doubled down and dissolved every friendship she had on the show — even Kyle Richards. Lisa stopped filming with the other Housewives, too, and, yes, that even counts in reference to the Season 9 reunion. Lisa didn't go to the reunion, per Bravo, and she apparently has no hard feelings about it. “The objective of the reunion is to reunite, right? And I have no inclination to reunite with the women who’ve been harassing me for 10 months now,” Lisa told the Daily Mail. "So... no."

When asked if she was at least going to regroup and head back for Season 10, that was a pass, too. Lisa said that the rest of the cast hasn't given her a reason to want to film with them again, so she's out. She has Vanderpump Rules and a rumored Vanderpump Dogs spinoff to worry about, anyway.

Are you sad? Some Bravo fans are sure to be crushed. Even Andy Cohen is shedding a tear for Lisa's departure. “No one will ever replace her,” Andy said on his Radio Andy podcast, Andy Cohen Live. “I’ve got to tell you... When I saw Lisa Vanderpump on that casting tape, man, she was the one who really sold me on doing the show. I just wanted to see more of Lisa and so did all of you. She is iconic and I am so glad that we will continue to see more of Lisa in all of her glory on Vanderpump Rules." Sad!

Though rumors have swirled that Kathy Hilton, Kyle Richards' sister and the mother of Paris and Nicky, will be taking Lisa's place, per Us Weekly, Kathy took to her own Instagram to jokingly shut down that news. For now, we'll all just have to deal with the fact that Lisa Vanderpump is gone from Real Housewives Of Beverly Hills. It could be a welcome change, if only to inject some life into a franchise that's seen better days. New stars, new drama.