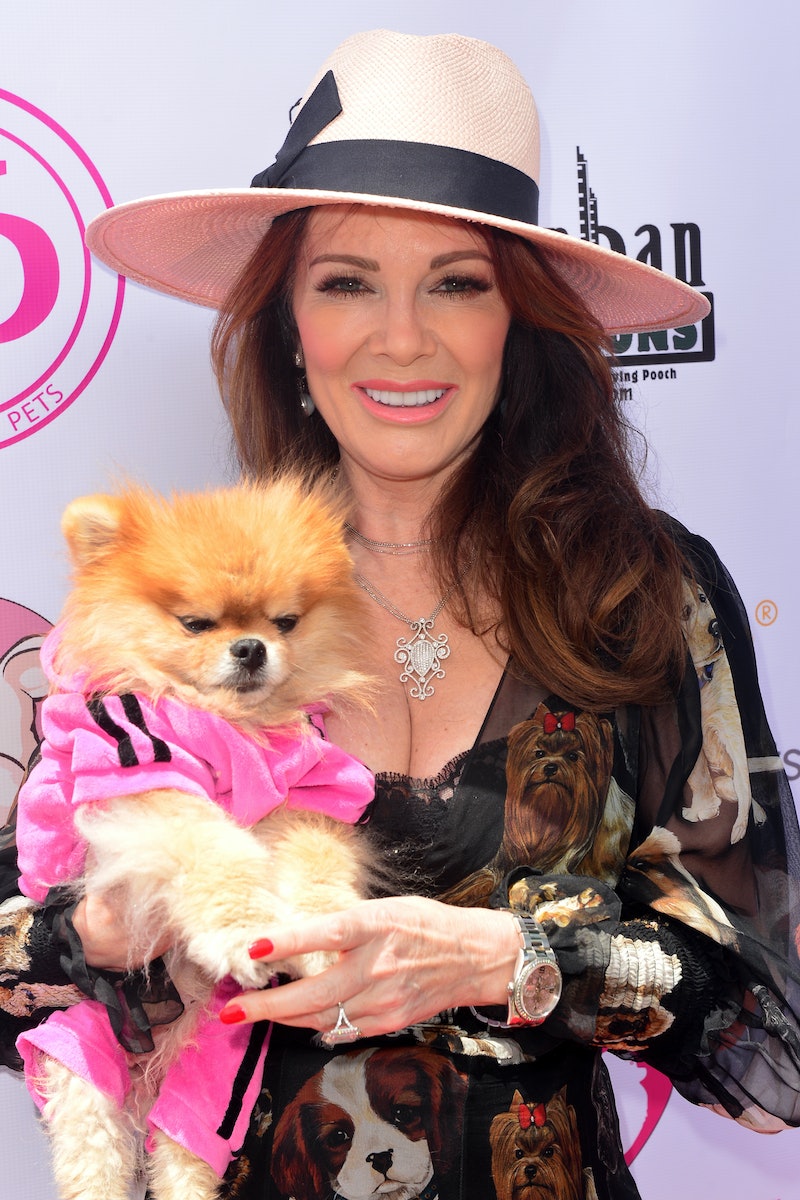 Lisa Vanderpump was one of the original cast members on Real Housewives of Beverly Hills. Now, it may be the end of an era. Lisa Vanderpump is reportedly not returning to RHOBH, and she will not attend the reunion for Season 9 either. The restaurateur seemed to confirm this news in a June 4 interview with DailyMailTV. (Bustle reached out to Lisa's rep for additional comment, but did not receive an immediate response.)

UPDATE: A rep for Bravo told Bustle via email:

“There is so much great drama and fun still to come this season including the ladies’ trip to France, so before we focus on next season, let’s see where this one takes us.”

EARLIER: Season 9 has been a rough for LVP, thanks to the dramatic "Puppygate" storyline. Her costar Dorit Kemsley adopted a puppy from her rescue center Vanderpump Dogs. After claiming that the pet bit her children, Dorit re-homed the dog with another family. Then, the dog ended up in a kill shelter, but was returned to Vanderpump Dogs after microchip detection. Lisa was unhappy with Dorit for violating the adoption contract when she didn't return the puppy back to Vanderpump Dogs.

During filming, the failed adoption story hit the press. Then Lisa's costars accused her of leaking the news. Lisa denied these accusations many times over, and she even took a lie detector test on camera. The lie detector test administrator declared that Lisa was being honest when she denied leaking the story. Nevertheless, she didn't share the news with the Housewives, since she stopped filming with them at that point.

There has been a lot of public speculation about whether or not Lisa will show up to film the reunion with her frenemies. Fans have also wondered if she would return to the show after this. Now, it's official: She will not do either.

During her DailyMailTV interview, Lisa was asked, "The reunion is coming up are you going?" Initially, she answered the question with another question. LVP remarked, "The objective of the reunion is to reunite, right?" Then, she declared, "And I have no inclination to reunite with the women who've been harassing me for 10 months now." She confirmed, "So in all probability, no."

Then she was asked the ultimate question: "Does this factor into what you're going to do next season? Are you coming back to the Housewives?" Lisa began, "I think they've made it pretty impossible for me to go back frankly." Then she confessed, "So ... no." After nine seasons, apparently that's a wrap for Lisa Vanderpump.

In a February interview with Us Weekly, Lisa dished on her reality TV projects. She admitted, "Of course, I’ve had discussions and we’ve talked about me coming back." She continued,

"No decision has been made and [my spinoff] Vanderpump Rules is a big show now. There are other things in the works. There’s something up my sleeve."

In that same interview, she discussed how reality TV has brought good things to her life, despite the drama. She said, "Bravo has been a brilliant platform. Not just financially it’s been beneficial, of course, but to highlight some of the philanthropic things [I do]. So Bravo has been good to me and I should never forget that."

In contrast, Lisa declared, "This season has not been good to me. My personal life went into a free-fall last summer and it’s just very difficult." In April 2018, Lisa's brother Mark Vanderpump passed away unexpectedly.

Lisa's discussed her future on the show in many interviews. During an April appearance on the RHOBH after show, she said, "It depends, I can't say" when an off-camera producer asked if she would return to the series. During that same segment, Lisa said she hasn't even watched episodes from the current season because, "It's no fun being the recipient of everybody ganging up on you."

In a May 30 interview with Hollywood Life, Lisa's close friend Lance Bass admitted that he wanted her to leave the show. He told the website, "I have told her for years to move on." He continued, "I tell her that she has Vanderpump Rules, which is so much better anyway, but she was a original member of the show and feels obligated to be a part of it."

"That was her life and she knows what that show did for her, so you know, she likes to see things through, but once people pounce on you like that and try to break you down in such a evil way, it’s hard to love what you do after that. So, I hope she takes a little break!"

The former *NSYNC member suggested that Lisa should follow the path set by Bethenny Frankel on Real Housewives of New York. He remarked, "You know she can come back in a few years, look Bethenny did it. Just take a little break right now. She needs a little breather."

Is this the end of Lisa's time as a Real Housewife? Or is it simply a break before an epic comeback? Only time will tell, but at least we still have Vanderpump Rules.

More like this
This 'Emily In Paris' X 'The Hills' Crossover Is Très Chic
By Marenah Dobin
'RHOSLC' Star Jen Shah Refuses To Do A Post-Sentencing Interview With Andy Cohen
By Brad Witter and Jake Viswanath
Lenny Hochstein's “Boob God” Reputation Bolsters His Multimillion-Dollar Net Worth
By Brad Witter
Everything To Know About 'RHONJ' Season 13
By Brad Witter and Jake Viswanath
Get Even More From Bustle — Sign Up For The Newsletter
From hair trends to relationship advice, our daily newsletter has everything you need to sound like a person who’s on TikTok, even if you aren’t.