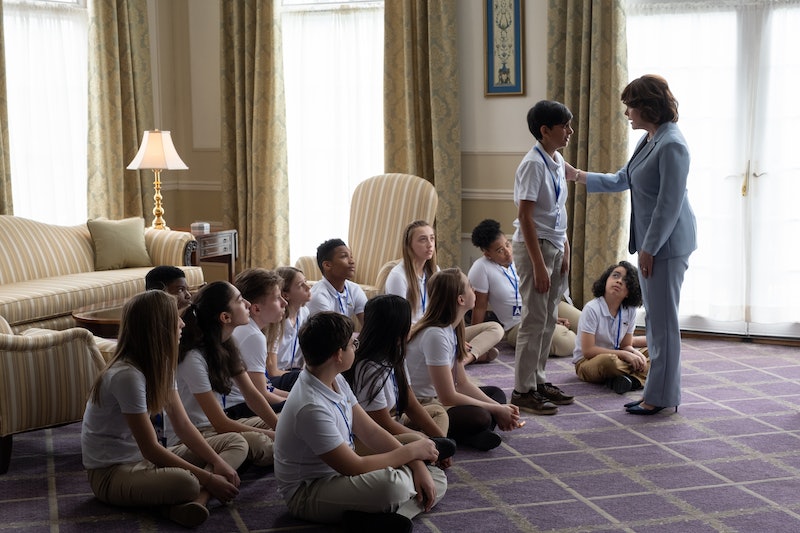 In the premiere of the AppleTV+ immigrant anthology series Little America, Pulitzer finalist playwright Rajiv Joseph, who wrote the episode, fits the strain of a decade onto a KFC receipt. Kabir has been running his family's Utah motel since his parents were deported back to India when he was 12. By the time they get their "papers sorted out" and return to the U.S., he's old enough to drink. The reunited trio heads to KFC, where Kabir occasionally used to be allowed soda on a school night. He recites the order: "Three chicken sandwich combo meals and three Pepsis," reverting to the precocious kid he'd been when his parents last saw him in person.

His mother steps in. "Daddy won't have any Pepsi. He'll have water." Diabetes, his father explains. Kabir looks dazed. Three Pepsis become two — two Pepsis and one diagnosis. "Actually, even I won't have any Pepsi," his mother says. That's one Pepsi, two waters, and a host of other details to take stock of: the diabetes diagnosis, how tall Kabir's grown, how his parents' hair has grayed, and the intimacy that ten years of geographic estrangement costs a family no matter their will to stay close.

What's never addressed during the episode are the reasons for that painful absence, what prompted the deportation order, or why it took ten years for Kabir's parents to obtain new visas. Though Little America features fictionalized versions of real immigrants' stories, the details of the immigration process are largely excised, obscuring the role U.S. immigration policy plays in the lives of its characters. For the show's producers, who have been accused of sidelining politics in a manner that "panders to conservatives and liberals equally," this isn't a problem — it's the point.

"We never wanted to have it feel like a medicine show," co-executive producer Emily V. Gordon tells Bustle. "Take your medicine, make sure you do all the right things. We wanted this to be an entertaining show and a show that's about community and a show about people." A few months after The Big Sick came out, which Gordon co-wrote with her husband Kumail Nanjiani, the Oscar-nominated duo were inundated with pitches for shows they could possibly produce, including a call from Little America showrunner Lee Eisenberg (The Office, Good Boys).

"We went and got dinner at a place two blocks from our house," says Nanjiani, who saw an opportunity to bring his own experience as an immigrant to bear on the project. "To this day, it's the only one we've said yes to."

In Little America, immigration to the United States is a primarily hopeful prospect. Personal setbacks can be mitigated with effort, bureaucratic ones with endurance. It's an editorial choice that, in the Trump era, might strike viewers as naive, out-of-date, or, sure, even pandering. The Dreamers are the paradigmatic example of U.S. immigrants who have demonstrated effort and endurance; now, they may be subject to deportation. In 2020, a sense of alienation isn't personal, it's systemic. America can be a good place to be and still a hard place to be from somewhere else.

America isn't a character, but a context. Immigrants' stories are what happens before or during or after their status is granted or denied.

Yet the decision to avoid being "overtly political," as Eisenberg described it to me, was rooted in a desire to make a show as personal as possible (Gordon described the show's tone more than once as "human"). The immigration system is responsible for the conditions of Kabir's loneliness, but his immediate concern — what animates him to become a championship speller to earn a meeting with First Lady Laura Bush and beg her for help — is how much he misses his parents. Even while Rafiq, a gay Syrian whose father tries to kill him, awaits a decision on his refugee application in the series finale, he works at a restaurant and makes new friends. America isn't a character, but a context. Immigrants' stories are what happens before or during or after their status is granted or denied.

In this way, the immigrants of Little America are like all other lost souls, their alienation primarily psychic. In one episode, undocumented teen Marisol finds direction through playing squash, an opportunity she likely wouldn’t encounter if her family had stayed in Latin America. But the instinct to find something to sink herself into is neither essentially American nor immigrant. It's human. Same with Beatrice, a Ugandan immigrant who succeeds in business after divorce.

In popular culture, the immigrant's struggle is frequently depicted as Herculean. Often, life is miserable in a person's country of origin; what they find in America is transcendent. This can absolutely be the case, and the eight stories of Little America don't buck that narrative completely. But they do, refreshingly, dial down the volume. Most real lives, just like most pilot episodes, are exquisitely ordinary. According to executive producer Alan Yang (Master of None), the show's restraint was a liability when it came to pitching studios. "It's a show with very few recognizable actors, without a major star anchoring the entire series," Yang tells Bustle. "It's a show that doesn't have explosions or a lot of violence. It's not a spectacle show. It's a show about grounded, real life stories."

It's a formula that effectively "flips the call sheet," as Eisenberg puts it — where the actor regularly cast as Terrorist #2 plays the lead. "So often on TV, you have a couple and they go into the convenience store, and there's an Indian guy behind the counter, and he has two lines or he's a stereotype and then the couple leaves and they go off on their day. And we said, what if the show was about the Indian cashier or what if the show was about the Mexican doctor?”

Little America doesn't ask it's characters suffer just so we can think about what we're doing wrong.

Gordon remembers veteran actor Shaun Toub, who did in fact play a terrorist for two seasons of Homeland, mentioning on set one day that he'd never been in every scene before. The moment stuck with Gordon. "That kind of summed up for me why this is really cool. We're doing a thing where this guy who's an amazing actor gets to be in every scene, [when he usually] only just played the foil or the bad guy."

Toub plays Faraz, an Iranian father who so desperately wants to build a house for his family that he buys a cheap plot of land dominated by a boulder. He spends the episode, written by Nanjiani, Gordon and Eisenberg, trying to bulldoze it. That he's an immigrant isn't his fate, but his starting point. Unlike some of the other series protagonists, he's not yet weaned from the romantic notion that anything is possible in America with enough grit. His journey isn't to a green card or a U.S. passport, but a personal triumph. If that obfuscates the role immigration policy has played in his life, it also avoids reducing Faraz's story to a site for American introspection or, worse, boring, didactic television. Little America doesn't ask it's characters suffer just so we can think about what we're doing wrong.

"We felt in some ways that by virtue of the show being made and that people would talk about it and that we had characters that don't look like you from countries that you're told you should be scared of, that the very fact it existed would be political," Eisenberg says, understating, I think, the show's resonance. If the characters don't look like "you" — by which I took Eisenberg to mean the average American non-immigrant (likely white) viewer — and their stories aren't a commentary on "your" government, it's more than just the call sheet that gets flipped. Whose stories are important to share and, critically, why? On Little America, immigrants' lives are are meaningful beyond what they can show us about how America works or doesn't. The exclusive reason to care is for the sake of human understanding.