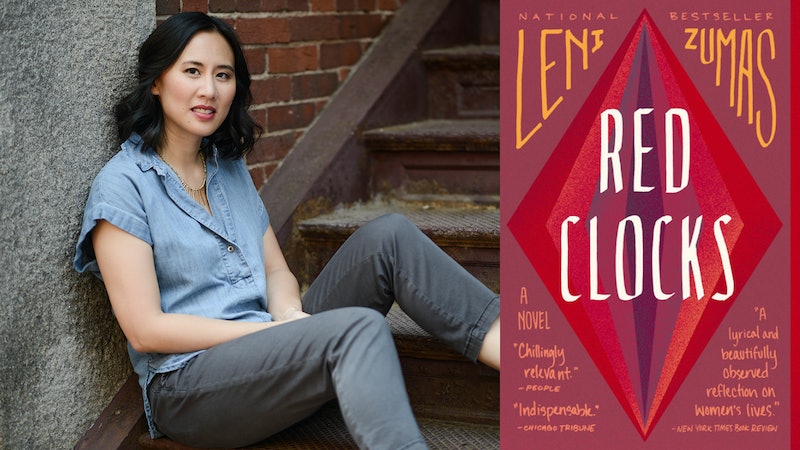 Each month, the Bustle Book Club asks an author to recommend a book they think everyone should read. In April, Little Fires Everywhere author Celeste Ng recommends Red Clocks by Leni Zumas. Follow along with the book club on Bustle and join the conversation on Goodreads.

The Trump administration has made it clear they seek to restrict abortions and access to reproductive healthcare. In the latest attempt to curtain women's rights, the administration released a rule that bars Title X funding from going to groups who perform abortions. (A federal judge blocked the rule.)

A string of new novels — including Bustle Book Club's pick for May, Red Clocks by Leni Zumas — have used fiction as a means to examine the very real costs of restricted access to reproductive healthcare

In Zumas's book, abortion is illegal, in-vitro fertilization is banned, and the "Every Child Needs Two" law will soon make it impossible for single people to adopt a child. Every embryo is, under law, granted life, liberty, and property.

It is in this America that four women in the Pacific Northwest grapple with the complexities of being a mother and the nuances of becoming one: Ro, a single high school teacher, wants a baby but can't get pregnant (she is also obsessed with a polar explorer, Eiovor, and is writing a biography of her; Eiovor is the fifth perspective of the book); Susan has two children and a husband, and she couldn't be more unhappy despite the outward perfection of her life; Mattie, one of Ro's students, has unexpectedly become pregnant and has nowhere to turn; and Gin, a mysterious forest dweller known for her herbal concoctions, might be the only person who can help Mattie escape a bad situation.

Red Clocks comes recommend to you by Celeste Ng, the author of Everything I Never Told You and most recently, Little Fires Everywhere, a New York Times bestseller and the basis for the new Reese Witherspoon-produced Hulu show of the same name.

Here's why she thinks you should read it:

"In 2018, friend after friend recommended Red Clocks, but I hesitated to pick it up: it seemed unbearably relevant to the current political moment. A world where abortion is illegal and embryos are given more rights than the women who carry them—weren’t we already most of the way there? But when I finished the novel, I didn’t feel despair. I felt hopeful — and energized, as if someone had wired a fresh battery to my brain.

Red Clocks is an intricately plotted mosaic of mysteries that unfold at a tantalizing clip. It’s a portrait of five different women navigating their roles in the world — and attempting to stretch the boundaries of what society will allow. And it’s a gorgeous rush of language that reads like a page-turner and feels like a poem. This novel reminded me of the power of human connection, the ways women support and defend and inspire and transform one another—and in doing so, transform and enlarge the world. I hope you enjoy it as much as I did.

Ng's book, Little Fires Everywhere, out in paperback on May 7, also deals with similar themes. Set in Shaker Heights, Ohio, the book centers on Elena Richardson, a middle class woman with four children, who rents the upstairs portion of a rental home to Mia Warren, an artist, and her teenage daughter, Pearl. The two families quickly become close, and their relationships are set aflame when both Elena and Mia become embroiled in a controversy involving a young Chinese immigrant and the baby she gave away in a bout of postpartum depression and economic uncertainty. Abortion, fertility, adoption, and the nuances of motherhood are all themes Little Fires Everywhere — as they are in Red Clocks — but Celeste Ng's book is set in 1990s America, a place where women, ostensibly, had the right to reproductive healthcare and motherhood on their own terms.

More like this
16 Novels That Paint A Realistic Portrait Of Abortion
By K.W. Colyard
5 Gripping Books To Read From Women’s Prize For Fiction Winner Ruth Ozeki
By El Hunt
10 Must-Read Books Out This Week
By K.W. Colyard
25 Spell Books For Every Type Of Witch
By K.W. Colyard
Get Even More From Bustle — Sign Up For The Newsletter