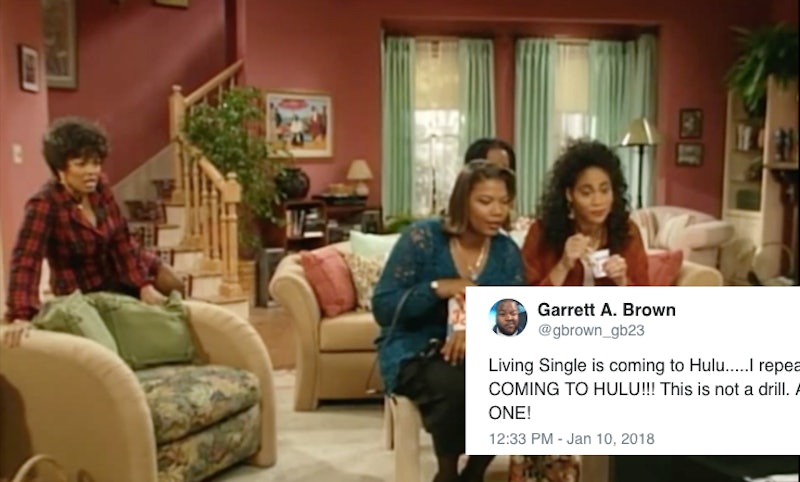 It goes without saying that '90s having a major moment within the realms of entertainment and fashion. Amid the many reboots and returns over the past few years, news that Living Single is finally coming to Hulu has sent fans into a complete frenzy. And honestly, who could blame them?

The predecessor of companion-based series, such as Friends and Sex And The City, Living Single became one most widely regarded African-American sitcoms of its generation, featuring the likes of Queen Latifah (Khadijah), Kim Fields (Regine), Kim Coles (Synclaire), Erika Alexander (Maxine), T.C. Carson (Kyle), and John Henson (Overton) as a tight-knit group of friends living the single life in the heart of Brooklyn. Smart, funny, and ambitious, the strong group of characters, mostly women, were easily relatable, inspiring, and entertaining to the many who tuned in religiously to watch their on-screen antics.

Plans to bring the show to Hulu were announced via the streaming network's Twitter on Jan. 9 in a tweet that would explain the full gravity of the series, which was created and produced by Yvette Lee Bowser. Along with a video of the show's memorable opening theme, the caption read, "It's a '90s kind of world. Again. Living Single, the entire series, streams January 11, only on Hulu."

The news immediately sent fans on social media into a frenzy with many expressing joy over the series' return. Reactions to the news revealed just how important the show was — and continues to be — to its devoted audience.

This person feels that 2018 is off to a great start now that Living Single is coming to Hulu.

One fan was so excited about the news that they were ready to leave their entire family behind to catch up on episodes of the beloved show.

3. All Hail The Queen

This Twitter reactor used this Bob's Burgers GIF to call on Queen Latifah for strength after hearing the exciting news.

Another fan made the declaration that the series was better that other sitcoms of its genre.

Another fan expressed extreme gratitude for the series' arrival on Hulu.

7. Battle Of The Sitcoms

Meanwhile, this commenter deemed Living Single the best of the best.

This person envisioned themselves in the house watching each and every episode.

9. Bring On The Popcorn

Another fan intends to cozy up with some snacks while watching all five seasons of the show.

This Living Single fan reveals that their prayers have finally been answered.

Using a meme to express their reaction, this commenter seemingly can't wait to relive memorable moments from series.

Meanwhile, this fan can't seem to contain their excitement over the news.

Though many were keeping their fingers crossed for a reboot of the beloved series, '90s aficionados can agree that being able to watch the entire show on-demand is pretty exciting news. That said, it's worth noting that all hope is not completely lost when it comes to the possibility of a revival. Cast member, Queen Latifah revealed that she was working to bring sitcom back during a January 2017 episode of Watch What Happens Live. Responding to a caller's inquiry about the show's revival, she explained, "We're actually working on it ... It's not there yet, but hopefully we can get it happening."

Living Single ran for five seasons between 1993 and 1998 and featured 118 episodes in total, which is certainly enough to keep fans busy while Queen Latifah and the rest the gang (hopefully) work on their big comeback.

A cultural phenomenon, Living Single became the centerpiece of many lives and friendships that were formed upon watching the interactions of this strong group of friends.

More like this
Here’s Why Danny Masterson’s Hyde Isn’t In 'That '90s Show'
By Brad Witter
Twitter Is Having A Field Day Over Mr Blobby’s Costume Selling For £62k
By Catharina Cheung
Man Meets Politics: ‘Boy Meets World’ Star Ben Savage Is Running For Congress
By Jake Viswanath
'Friends' Star Maggie Wheeler Offers Support To Matthew Perry After Reading His Memoir
By Alyssa Lapid
Get Even More From Bustle — Sign Up For The Newsletter
From hair trends to relationship advice, our daily newsletter has everything you need to sound like a person who’s on TikTok, even if you aren’t.