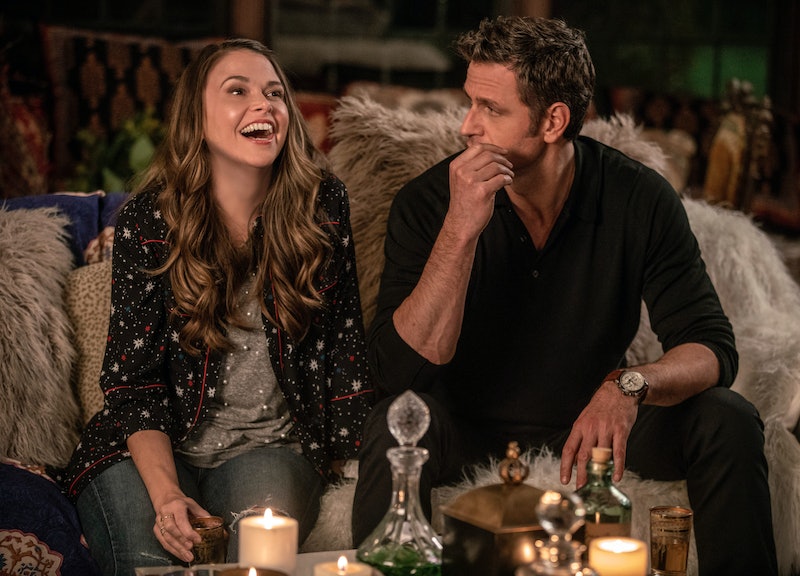 Sometimes, in all the hooting and hollering, it’s easy to forget that Younger is a show about publishing. Making books seems boring on the outside, but this show makes it fun, and some of the best storylines come from zany book parties and, in the case of the July 17 episode of Younger, author divas that could rival any starlet (actually, some of them are starlets). But this particular diva may have done the impossible, forcing Charles and Liza to finally talk to each other again. It was about time, too. This week, Liza finally stood up to Charles on Younger, and it could be the beginning of their reconciliation. Or at least fans should hope so.

Rock star Chrissy Hart (played fabulously by Gina Gershon) is writing one of those once-in-a-generation books for Empirical — it could be the new Just Kids, Charles and Diana say. Except for the fact that Chrissy won’t email the book to New York City from her home on Shelter Island — she doesn’t trust the Internet ever since her nude photos got leaked. So that means that Charles must journey to the ends of the Earth (or really, the end of Long Island) to get it. And then Liza has to follow him, because, of course, Chrissy just wants Charles to drink her homemade kombucha and have sex with him. Drunk Liza and Charles with a drunken rock star would have been entertaining without what happened next. Prepare yourselves.

When Liza confronts Charles and asks when the heck he’s going to trust her again, Charles is forced to come to terms with the fact that, oh, maybe he really does care about Liza. He even does that whole “wait-at-the-door” thing like we've seen in every rom-com ever, but then he bails. Charles! No! Because this is Younger, Liza ultimately gets the book because she gives Chrissy Hart a pep talk, telling her that if she withholds this book and remains afraid to put herself out there, well, she’s no better than all the other dudes who have ever left them both behind. When Liza drops the book on Charles desk, she says she succeeded because she “didn’t run away.” Talk about some shade.

This whole “I better ask for what I want and stand up for myself” thing resounds through the whole episode. Diana finds out that Enzo lives with his mother still (on Staten Island), and she goes along for the ride, only stopping to tell off Enzo’s mother that it doesn’t matter how old she is — she’s a prized penny anyway. Kelsey is sleeping with both Zane and Jake, and she’s going to continue to do so, because she can. Chrissy is publishing her book as a giant “eff you” to all of the people who have done her wrong.

The women of Younger are certainly finding their voices here — and while it’s highly probable that some of these decisions may blow up in their faces, at least they’re putting their wants and needs above the wants and needs of everyone else in their lives. Namely the men they've put or are putting themselves on hold for. Women are way too frequently taught to be caregivers, to focus on others and not themselves. But on Younger, there’s give and take. Diana can go with Enzo but also still not be disrespected by his mother. Liza can let Charles be mad at her and then tell him to get over it. There is no ring on Kelsey’s finger. It’s time to make some decisions.

And as for the other huge question of the entire season so far — will Liza and Charles finally get together? That’s a hard one, because Charles needs to get over Liza’s lies and admit his true feelings for her. (Can you tell I’m Team Charles?) Josh isn’t even in the picture anymore, and Don’s out, too, which means Liza is Charles’ to lose on Younger. He just needs to get over his pride first. Hopefully soon.