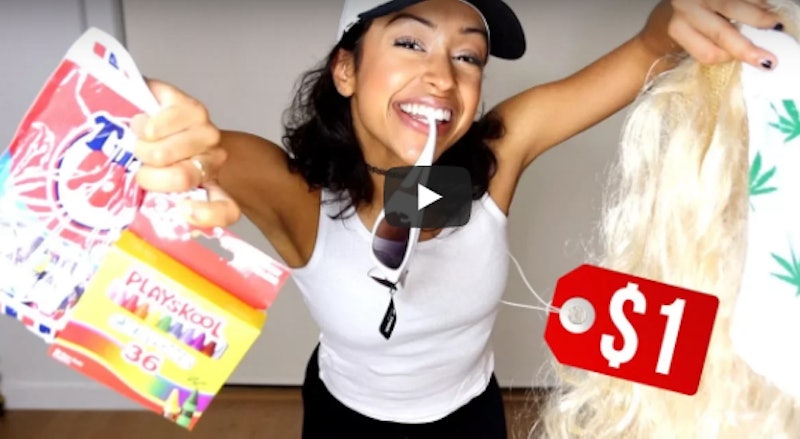 You've heard beauty experts and influencers say it a million times over: You don't have to spend big money to look good. But did you ever think you would find your next outfit at the dollar store? What Macklemore did to Goodwill, this vlogger is doing to dollar stores. YouTube personality Liza Koshy dressed in dollar store outfits — didn't look half bad.

For those who aren't familiar with the hilarious comedian, Koshy is a YouTuber turned actress, with a resume that has her playing the leading role in Hulu's Freakish, and part of Tyler Perry's horror comedy film Boo! A Madea Halloween, just to name a few. Her YouTube channel isn't anything to sneeze at either — it has more than 13 million subscribers and 1.5 billion views, making her channel the 71st most subscribed to on the platform. She literally has more subscribers than there are people living in Belgium. And for good reason: she is hilarious. Which is why when she decided to dress up in all dollar store clothing finds, you knew it was going to be good. But what was surprising was that she didn't look half bad in the outfits. People on a budget, take note.

To start off the haul video, Koshy showed us that she found Calvin Klein pieces for just a dollar. Who knew that your local dollar store might carry the iconic designer?!

"This is CALVIN KLEIN for TEN DIMES," she yelled at the camera, bringing out undies and a tank that used to cost $15 a pop. "Check it. Coachella outfit? Done." Are you crying yet?

There were a few questionable pieces that came out of the haul bag though, like wrap-around shades that always seem to be a staple for guys who have a penchant for wearing way too much hair gel and donning Ed Hardy tees.

"I'm either a biker wearing these. Or a pervert on a beach in Miami," she mused.

She also "bought herself a new personality" by snapping up two different dollar store wigs — one being a long blonde one, and the other being a black sassy bob.

"I look like I'm about to fly to Sweden and kill somebody," she riffed. Then she put on black shades with the wig and decided that she looked like she just robbed a gas station.

But those are just the accessories — the actual clothes were surprisingly wearable. One of the outfits she came out in looked like your typical college outfit with a white tee, leggings, infinity scarf, and beanie. Each piece cost her four quarters.

"You can cover up for just a buck. I'm talking to you kids wearing crop tops. Spending 20 bucks on half a shirt. Ya nasty," she lectured. That's some solid economical advise right there.

But wait, there was more! Next she came out in a 420-friendly lewk. "I only shop at Zumiez," she said as she slid in front of the camera in weed-stamped high socks. She accessorized the fashion-forward outfit with a baseball hat and tattoo choker, as one does.

The comments under the video from viewers were just as hilarious as Koshy's own observations. Concerning her gas station robbery inspired wig, one person asked, "Anna Wintour? Is that you?﻿" Another person thought she resembled a certain Incredibles character, writing, "What a legend she can transform ya self into EDNA MODE for just a DOLLA﻿."

To really get how funny the video is (and get the proper sartorial inspiration), you need to watch the video. But be warned: You just might stop at the dollar store today to pick up some fresh new looks.