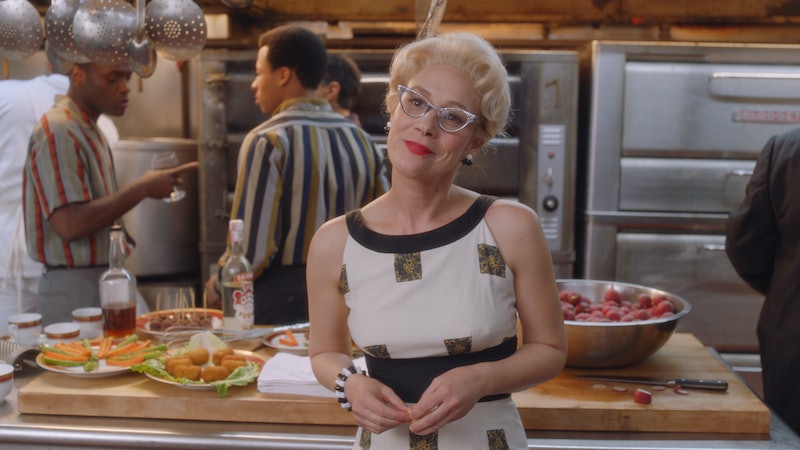 Good news for longtime fans of Amy Sherman-Palladino and Daniel Palladino: The Marvelous Mrs. Maisel Season 3 basically features a crossover with their other beloved dramedy, Gilmore Girls. While the two shows take place in vastly different time periods with totally different characters, (another) key actor from Gilmore Girls is now a part of the Marvelous Mrs. Maisel cast: Liza Weil. And her character, Carole, is kind of the perfect fix for those still missing GG: she's essentially a lightly altered version of Paris Geller.

As Gilmore Girls fans will recall, Paris was Rory's erstwhile high school rival who became her closest friend and supporter. She was known for being brilliant, tough, brutally honest, and not all that sociable — "I am not cut out to deal with people," she once explained to Rory — and Weil's role in Marvelous Mrs. Maisel is eerily similar. Carole is a no-nonsense musician in Shy Baldwin's band who befriends Midge early on in the tour. Unlike Midge, she's a veteran of living on the road, and she has quite a few lessons to impart to her relatively inexperienced and sheltered new pal.

Here are all of the reasons she'll remind you of Paris while she's doing so.

Paris is a longtime Gilmore Girls favorite thanks in part to her absolutely brutal speeches. Take, for example, what she said to Logan after he showed up to the dorms after Rory learned he slept with half of his sister's friends while they were on "a break":

"You, Logan Huntzberger, are nothing but a two-bit, spoiled waste of a trust fund. You offer nothing to women or the world in general. If you were to disappear from the face of the Earth tomorrow, the only person that would miss you is the Porsche dealer."

Carole, meanwhile, invites Midge to her room after a particularly grueling performance and offers her a whole food spread. "Here's to someone with tits to talk to," she cheers.

In Gilmore Girls: A Year In The Life, Paris has become a mom to two kids with Doyle, and she's surprisingly sweet with both of them.

Carole has three kids, and she jokes to Midge that she can already tell one of them is going to be "a huge asshole." She clearly loves them though, and Midge is able to recognize the same wry affection that she has for her own kids.

Paris was aggressively logical and level-headed, and Carole is no different. When Midge joins Carole in her room, she informs her that there's "beer in the bathtub" and "booze on the sill" because she "likes her beer cold." When Midge wonders where Carole bathes, she simply responds that there are showers at the pool.

Carole also informs Midge that she ordered everything but the fish because "it stinks up the drapes," and she always charges it to her bandmate Howard's room.

"Howard doesn't know anything but how to tune a piano," Carole says matter-of-factly.

They're Both Dedicated to Their Work

When you first meet Paris, she's determined to attend Yale and make it big in the newspaper business. Fast forward to Gilmore Girls: A Year In The Life, and it's revealed that she graduated from medical school and now successfully runs her own fertility clinic. Not exactly what she had planned, but a very impressive job nonetheless.

Carole is just as dedicated to her work. She informs Midge that she's lived on the road for 15 years, even while having her own children. "I send home the money," she shrugs when Midge asks if she ever misses them, before admitting she does — but like Midge, that's not enough for her to settle in any one place.

They Both Have A Lot to Say About Men

Both Paris and Carole are pretty feminist, insightful characters. Paris once derided Chilton's headmaster as a "white-haired sexist," for example, for presuming that she and Rory were fighting over a boy.

Carole, meanwhile, points out the inherent sexism of people always asking her if living on the road makes her a bad mother. She tells Midge that nobody judged her father for being a traveling salesman, but everyone judges a woman for doing the same.

They're Both Sex Positive

In a surprising twist, Paris went from being pretty uptight and prudish to confessing she lost her virginity on live TV.

Carole takes it even one step further, dumping a whole wealth of knowledge on Midge about the anatomy of a one night stand. "Keep it simple, no feelings," she gamely explains. "They can't think you're a girly girl."

She goes on to list off the rules: hook up at their place so you can make a quick getaway; if the place is a slum, don't sleep with him; if you don't have a gun, learn how to use keys or heels as a weapon.

Aside from Susie, Midge hasn't had a ton of guidance from female creatives, so it's nice to see her connecting with other women — especially someone she has as much in common with as Carole.

More like this
Every 'That '70s Show' Character Who Returned For The Netflix Spinoff
By Grace Wehniainen
Everything To Know About A Potential 'Lockwood & Co.' Season 2
By Gretchen Smail
Shonda Rhimes Responded To The Surprise Exit Of A Day 1 'Grey's Anatomy' Figure
By Grace Wehniainen
This 'Gossip Girl' Wardrobe Error Has Gone Viral On TikTok
By Alyssa Lapid
Get Even More From Bustle — Sign Up For The Newsletter
From hair trends to relationship advice, our daily newsletter has everything you need to sound like a person who’s on TikTok, even if you aren’t.