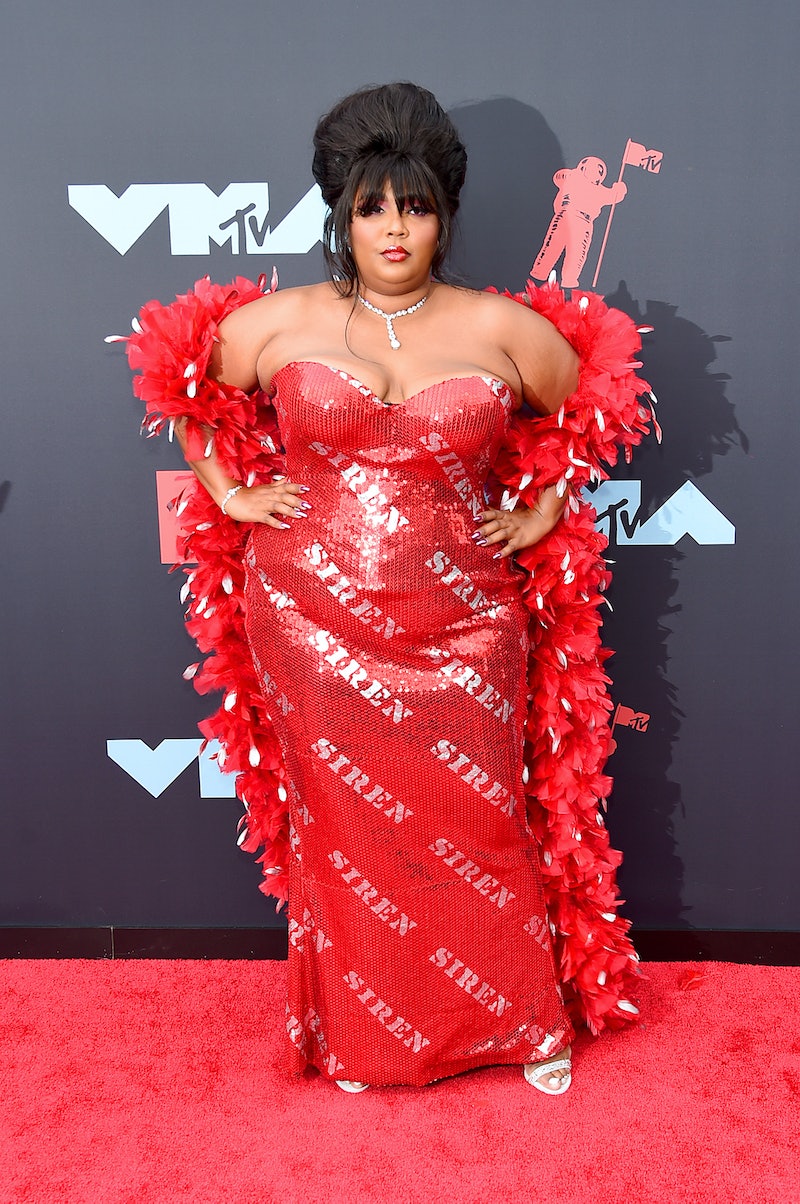 By now, everyone knows that Lizzo is "100% that b*tch" who isn't afraid to be anyone but herself. That wasn't always the case, however. The reason Lizzo takes self-love "very seriously" nowadays is because the "Truth Hurts" singer didn't have a whole lot of it when she was growing up.

"I wanted to change everything about myself,” she admitted of her formative years, in a new interview for Elle's October Women in Music issue (on newsstands Sept. 24). “I didn’t love who I was. And the reason I didn’t love who I was is because I was told I wasn’t lovable by the media, by [people at] school, by not seeing myself in beauty ads, by not seeing myself in television...by lack of representation."

As Lizzo further explained to the magazine, "My self-hatred got so bad that I was fantasizing about being other people. But you can’t live your life trying to be somebody else. What’s the point?”

That lesson was one that Lizzo's not only taken to heart personally, but that she's made a point to share with the world as well. Take, for instance, the speech she gave during her 2019 VMAs performance. "I'm tired of the bullsh*t," Lizzo proclaimed from a platform during a break in her rousing "Good as Hell" anthem. "It's so hard trying to love yourself in a world that doesn't love you back, am I right? You deserve to feel good as hell! You deserve to feel good as hell!"

Lizzo is just as human as anyone else though, and she does still have "inevitable" moments where she feels down. “But the fact that I’m prepared now to go to those places — and I have a toolbox, and I know I can pull myself out — is really helpful to me in my mental health journey,” she added in her Elle interview.

Of course, this is far from the first time she's spoken on the topic. In Lizzo's April op-ed for NBC News' THINK, she explained why she doesn't believe that self-love is choice. As the musician wrote: "I think that it's a decision that has to be made for survival; it was in my case. Loving myself was the result of answering two things: Do you want to live? 'Cause this is who you're gonna be for the rest of your life. Or are you gonna just have a life of emptiness, self-hatred and self-loathing? And I chose to live, so I had to accept myself. That's the first step: Acceptance. And acceptance is hard. I'm still accepting myself every day; I'm still working on it."

Currently, she does have plenty to celebrate and feel good as hell about. On Sept. 3, "Truth Hurts" hit No. 1 on the Billboard Hot 100 chart. Not only did the single — which she dropped all the way back in Sept. 2017 — mark her first-ever chart-topper, but she's also only the sixth female rapper in history have a No. 1 song on the Hot 100. (She officially joined the ranks of Lauryn Hill, Lil Kim, Shawnna, Iggy Azalea, and Cardi B.)

Lizzo reacted to the exciting news with an equally enthusiastic tweet: "WE’RE NUMBER 1. THIS IS A W FOR ALL OF US. ANYBODY WHO EVER FELT LIKE THEY VOICE WASN’T HEARD. ANYBODY WHO FELT LIKE THEY WEREN’T GOOD ENOUGH. YOU ARE. WE ARE. CHAMPIONS. I LOVE YALL 3 MUCH. LIZZBIANS UNITE 🌈☔️"

The public's adoration of Lizzo is undeniable, but the most important validation is the love she has for herself. That is a message that everyone could benefit from listening to.