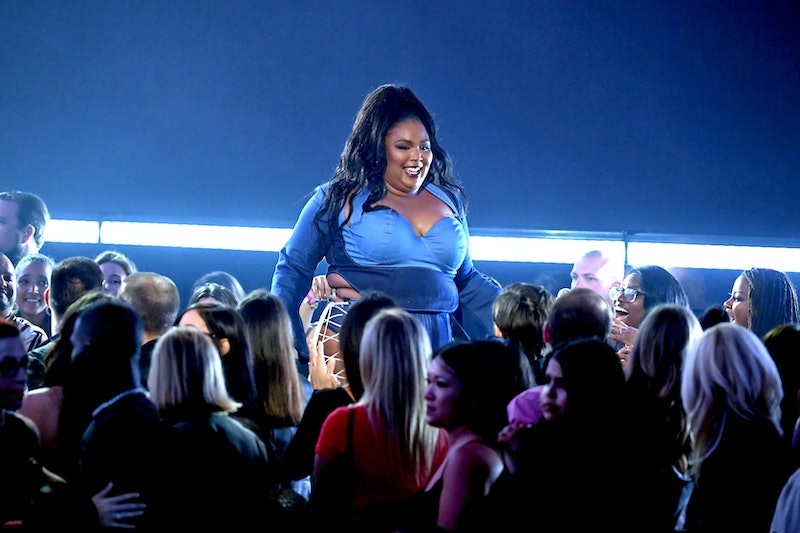 Cue the celebratory flute solo, because Lizzo’s got the No. 1 song right now. On Tuesday, Sept. 3, Billboard announced Lizzo’s “Truth Hurts” reached No. 1 on the Hot 100 list. This is a major deal for a whole pile of reasons. First of all, it is Lizzo news and Lizzo rules. Oh, and she is now one of six female rappers to have a No. 1 song on the Hot 100. Oh, and even though “Truth Hurts” came out nearly two years ago, but it is really having a moment in 2019. (Yeah, it took a while for the ol' charts to catch up, but hey, better late than never.) Oh, and this is Lizzo’s first No. 1 song, and that is a pretty dang significant career milestone.

Understandably, Lizzo is way stoked about this achievement. After Billboard released the chart with "Truth Hurts" at the tippity-top, she tweeted:

If you do not feel good as hell after reading Lizzo's reaction, give your hair a toss, check your fingernails, and read it again. Because her reaction is 100% that b*tch, and by "that b*tch" I mean "inspiring, delightful, and one more reason to adore Lizzo and everything she brings to the table."

Cardi B knows a thing or two or three about being at the top of the Billboard Hot 100, and she could not be more thrilled for her Hustlers co-star. “The fact that Lizzo a couple months ago felt underestimated and now she have a #1!!!!” she tweeted on Tuesday. “B*TCH! take that!take that ! Makes me emotional It’s the best feeling in the world.”

Lizzo replied, “You know how it feels frfr thanks girl!!”

Lizzo originally released the song on Sept. 19, 2017, and it debuted at No. 50 on the Billboard Hot 100 in May 2019. On Aug. 26, she opened her performance at the 2019 MTV Video Music Awards with "Truth Hurts" before segueing into "Good As Hell." Her contribution to the awards show was nothing short of wonderful. About a week after she melted our faces off with that performance, "Truth Hurts" climbed to No. 1.

"Truth Hurts" has finally received the Billboard recognition it has deserved for over 700 days, and again, it is better late than never. The Lizzo Era is here, and to quote the ruler of said era, "I mean who would wanna hide this?" Be it the commercial breaks, the radio airwaves, the big screen, or the Billboard charts, Lizzo reigns supreme.

More like this
Who Is Camila Cabello Dating? She's Getting Cozy With Lox Club CEO Austin Kevitch
By Radhika Menon
Taylor Swift & Her Mom Clap Back Against The “Shake It Off” Plagiarism Lawsuit
By Jake Viswanath
Beyoncé Is The First Woman To Have A No. 1 Album Since Adele Did Almost A Year Ago
By Radhika Menon
Christina Perri Reacts To Her 'Twilight' Song Being One Of YouTube's Most-Viewed Ever
By Radhika Menon
Get Even More From Bustle — Sign Up For The Newsletter