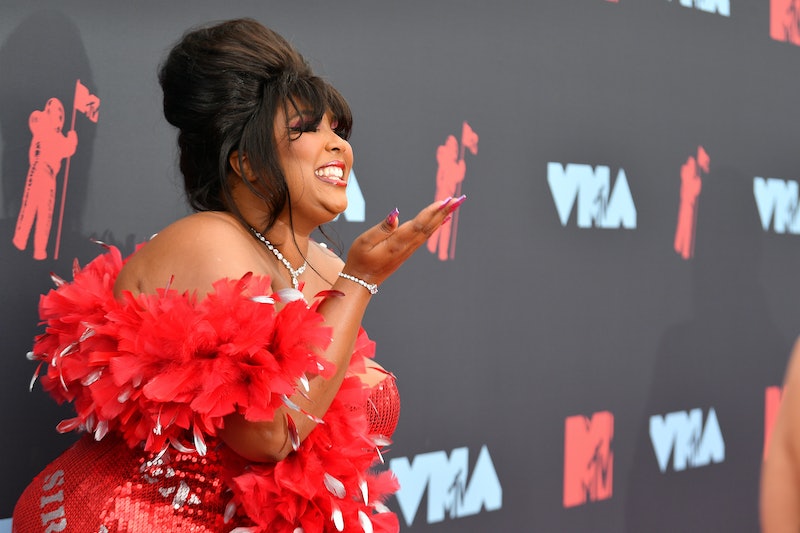 Lizzo is 100 percent that band geek. So you can't blame her for getting a little verklempt over seeing how her music is inspiring other school band members. In fact, Lizzo's emotional reaction to marching bands playing her music just shows the twerking flautist will always take pride in being a part of the woodwind section.

On Monday, Sept. 2, Lizzo posted videos to her social media of marching bands across the country doing her songs, including the Fabulous Dancing Dolls from Southern University performing a choreographed number to "Juice." She also shared a clip of Tennessee State University's flute section, tweeting, in all caps, "THEY HIT THE TRUTH HURTS FLUTE TRILL N TWERK."

"Seeing that piccolo section, that flute section really got me in my feelings tonight," Lizzo said on her Instagram Stories, wiping her eyes. Specifically, the school took inspiration from Lizzo's recent BET Awards performance. You know, the one that might have led to a friendship with Rihanna.

In a series of videos, Lizzo explained why she's so grateful for these school marching bands, a lot of which are from HBCUs, or historically black colleges and universities, who are playing her music. "I am a legitimate band geek, band nerd," she said on Insta Stories, "like not even in the cute way, like it's cute now."

Lizzo joined marching band when she was in eighth grade and she said on Instagram that she was teased for being in the school band. However, watching these bands play her music has made her feel like it was worth it. "I legitimately felt lame," she said about playing the flute, "but I continued to stay in band and I continued because I loved music so much and I loved marching band culture."

She later called marching band "one of the greatest times" of her life and said it shaped her identity. And now, Lizzo is having an effect on that same culture and she's feeling good as hell about it. "Not only to see marching bands, black marching bands, playing my music, but to see the flute sections going off," she said really meant something to her.

"It makes me feel like not only am I not only in the right place right now," she said, tears streaming down her face. "But, everything that I did and every emotion that I felt, all of that sorrow or pain or feeling lost of confused or like I didn't fit in and I wasn't black enough, I wasn't cool enough, it makes me feel like all of those emotions and all of that time was worth it."

It wasn't easy, but practice has made perfect. Lizzo's flute is now a major part of her performances. (Lizzo's flute even has its own Instagram account, FYI.) She twerks as she plays, which is a skill most other flautists have yet to master. Last month, Lizzo posted about the "flute revolution" that she seems to have started. Truthfully, it might make you want to join your local marching band.