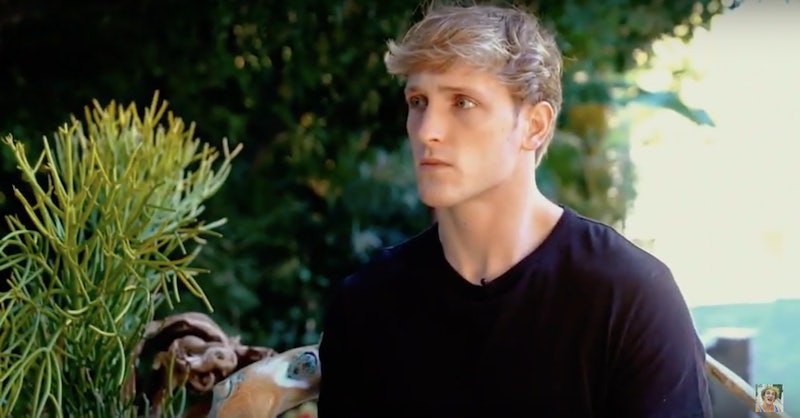 Three weeks after uploading a controversial video from the "suicide forest" in Japan, Logan Paul returned to YouTube with a new video that tackles suicide and depression in a serious way. As Polygon pointed out, Paul strikes a very different tone with his latest vlog, which is documentary in style. In the over 7-minute clip, titled "Suicide: Be Here Tomorrow," Paul talks with people who struggle with depression to try and understand what it is they're going through. But it's also Paul's way of apologizing for his previously tone-deaf video on the topic.

On Dec. 31, Paul posted a video of a dead body of an apparent suicide victim in the Aokigahara forest and almost immediately, people were asking YouTube to ban the popular star. Paul apologized twice for the video on Twitter and YouTube, only making people madder once they learned that he profited from the apology video. Paul later tweeted he was "taking time to reflect" and would take a break from vlogging. That break would last less than a month.

A week after he posted the offensive video, which has since been deleted, YouTube announced it was breaking some ties with Paul — they removed Paul's channels from the Google Preferred program, and will not feature him in the next season of his YouTube Red web series, Foursome — but wouldn't remove his channel entirely. That's where he posted his latest video, which in less than 24 hours already has more than a million views.

Over the course of the three weeks in which Paul refrained from posting, he was making this video, which focuses on suicide prevention. Paul met with people like Kevin Hines, who tells his story about trying to take his own life when he was 19, as a way to "further understand the complexities surrounding suicide." But, it's also his way of further apologizing for posting a video that seemed to turn suicide into a joke.

In the first minute of this video, Paul says: "I know I've made mistakes. I know I've let people down. But what happens when you're given an opportunity to help make a difference in the world?" Paul soon answers his own question, explaining that he must "learn from the past as I get better and grow as a human being. I'm here to have a hard conversation so those that are suffering can have easier ones."

Those hard conversations include talking with Dr. John Draper, the director of the National Suicide Prevention Lifeline, who told Paul that to help people struggling with depression, you must reach out and let them know they're not alone. "You could hold on a lot longer if somebody is right there with you," Draper explained.

Paul also talked to Bob Forrest, a musician turned counselor who was featured on Dr. Drew's Celebrity Rehab, about being "humbled" by the response to the video. Paul also said that he was surprised to know what a problem suicide is for so many people. "You've never known anybody that killed themselves?" Forrest asks confusedly, before saying that suicide is the leading cause of death in Paul's home state of Ohio. But Paul claims that "just my ignorance on the subject" was why he didn't think twice before posting the video.

After Paul's three-week tour, he claims to better understand why posting such a taste-less was a mistake and he's committed to helping those in crisis. "I think as a society, as human beings," Paul said, "we just have to be more compassionate and that includes me, too."

Logan stated that he knows "I'm not able to solve the problem by myself," but he wants "to be a part of the solution." Now, he'll have to wait and see if people are ready to accept his help and his apology.