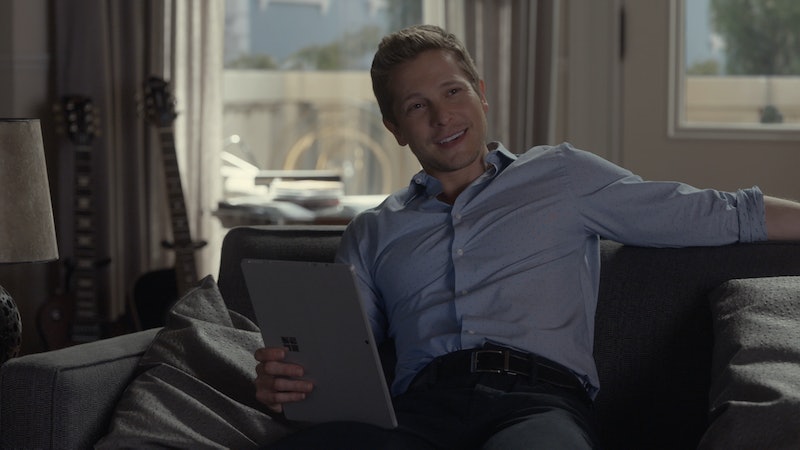 Which Gilmore Girls boyfriend reigns supreme? I know it’s pretty controversial, but I was always a Logan fan myself. I know he could be a little arrogant and aloof at times, but when push came to shove, he was the boyfriend that was the most there for Rory with no strings attached and no dramatic fits. He really wanted the best for her, so much so that he was ready to scoop her up to California so they could get married and eat avocados near his new job. Obviously, I was excited when I heard Matt Czuchry, who plays Logan, joined the Gilmore Girls Netflix series. But what was Logan’s ending in the Gilmore Girls revival? MAJOR SPOILERS AHEAD for the Netflix series.

Well, first, to recap: Rory and Logan did not exactly end things well when they broke up at the end of Season 7 — Logan had proposed, completely out of the blue, and Rory said she wasn’t ready. Logan felt like he couldn’t back with Rory, and so the two of them went their separate ways. That’s just how it goes sometimes, but it was still sad nonetheless. I always hoped that it wasn’t the end of their relationship, and 10 years later, Gilmore Girls: A Year In The Life showed that it sort of wasn’t. “Winter” introduces the fact that Rory and Logan are still, in fact, in a relationship — one of strictly sexual definition.

She stays at his place in London (he still lives and works there) when she visits, and the two have a “what happens in Vegas” friends-with-benefits deal in place. They have dinner sometimes, and clearly, they have sex. The only problem with said arrangement is that Rory has a boyfriend of a few years named Paul, and Logan is engaged to a French girl named Odette.

While I’m all for an open sexual relationship, what Logan and Rory are doing is not exactly kosher. Rory always runs back to Logan when she has problems, that’s not great, either. Rory is flailing in her life, and Logan swoops back into save her (coming all the way from London), along with Colin, Finn, and Robert. The Life & Death Brigade is back! There's a musical montage around Stars Hollow, and it’s all well and good, but somehow, it doesn't feel right. The montage is right, don’t get me wrong, but Logan coming for Rory isn't. After one more night together in a New Hampshire bed and breakfast, they both finally figure it out. Logan has a fiancé, Rory doesn't need to be rescued, and that is that.

Their breakup, if we can call it that, was sweet and I think did their bond justice. They were a great couple when they were in college, but things changed and nothing gold can stay. And, oh yeah, Logan is engaged to be married, and Rory can't be the other woman. That’s big. Now it’s time for Rory and Logan to forge their own paths separately, and that’s how Gilmore Girls: A Year In The Life did Logan justice.