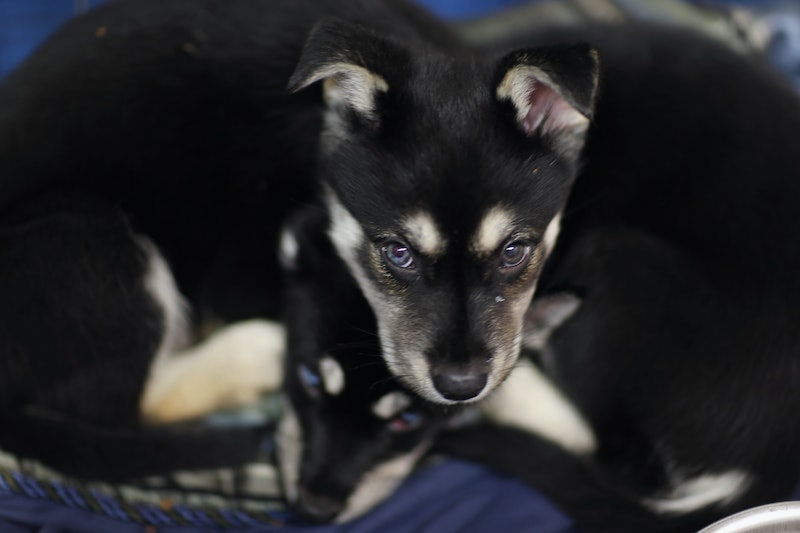 The 2019 music festival season is fast approaching, so it’s no surprise that news of all those lineups is starting to emerge. What is somewhat surprising — and delightfully so! — is how one festival made its first announcement: Tons of adorable, adoptable dogs just helped announce Lollapalooza’s 2019 lineup in a video that’s so cute I can barely stand it. Or part of the lineup, at least — we now know who 12 of the biggest artists performing this year will be. Local pet shelter PAWS Chicago teamed up with Lollapalooza to make the video, and folks? It is exactly what you need right now, even if you’re not really a music festival person.

Lollapalooza 2019 is set to occur at Chicago’s Grant Park between Aug. 1 and Aug. 4. Given the festival’s traditional locale, it would make sense for the organizers to team up in some way with other local organizations — hence the partnership with PAWS Chicago. Founded in 1997, the no-kill shelter helps pets find their forever homes, provides disaster relief for pets affected or displaced by events like hurricanes, and spays and neuters pets at low costs for under-resourced Chicago families.

Not going to lie: That paragraph took me much longer to write than it should have because I kept getting distracted by all the ADORABLE ANIMAL PHOTOGRAPHS on all of the PAWS Chicago website’s informational pages.

Lollapalooza and PAWS Chicago’s video serves a few purposes: It announces that four-day ticket sales for the 2019 festival are now on sale; it reveals 12 of the acts that will be performing this year; and it showcases tons of adorable puppies you can adopt literally right now. (They’re not all actually puppies; some of them are adults. But to me, all dogs are puppies, no matter how old they are, so that’s what I’m going with here.)

Throughout the course of the nearly 14-minute-long video, we’re introduced to eight dogs in four different groups. First come Frank and Liam, both black mouth curs. Next comes a trio of girls with Game of Thrones-inspired names: Sansa and Brianna, both black labs, and Arya, a Labrador retriever/Australian cattle dog mix. (And yes, the second lab should probably be called “Brienne” — the announcer very clearly calls her “Brianna,” though. It’s unclear whether whoever named her got it wrong, or if the announcer just doesn’t know how to pronounce “Brienne.) Then we meet two terrier mixes, Helga and Rhonda. And lastly, Philip, another black mouth cur, arrives; he’s later joined by Frank and Liam in their second appearance.

As the puppers play in an enclosed area full of toys — one of which might be the Drop The Mic toy from BarkBox’s Bark Shop — and small yellow and white balls or balloons, an announcer offers a number of clues about several performers on the 2019 Lollapalooza schedule You’re given about three clues per artist while a clock counts down the 30 seconds. (Presumably you’re supposed to guess the answer within those 30 seconds, but no one is going to penalize you if you pause the video while you think.)

To be honest, I am less interested in answering the trivia than I am in the dogs — but hey, guess what? That’s OK — you can still figure out the lineup even if all you do is focus on the pups If you look at the floor of the area in which the dogs are playing, you’ll see photos of each artist underneath their little doggy paws. And if even that is too much, here’s the list of artists included in the video (look away NOW if you want to avoid spoilers): In order, we have Tame Impala, Janelle Monáe, Lil Wayne, ROSALÍA, Yaeji, J Balvin, Tenacious D, Slash, Gunna & Lil Baby, Calpurnia, Lil Skies, and Madeon.

Most important, though, is this: The pups featured in the video are all up for adoption — and PAWS Chicago has tons of other furry friends looking for their forever homes, too. In fact, there’s an adoption event going on this Saturday, March 23. Called the A Chance To Bloom event, it’s geared towards homing older pets, who often up in shelters for much longer than younger puppies and kittens do due to their age. You can find out more about the event here; or, if you’re not able to make that one, find out more about PAWS Chicago, how to adopt from them, and how to donate or volunteer here.

Now if you’ll excuse me, I have to go snuggle my cats now.