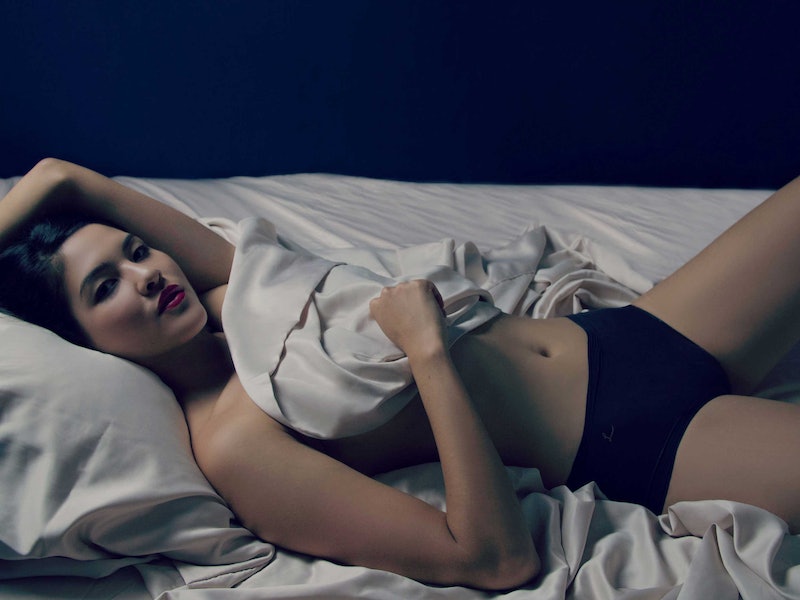 Oral sex is a huge part of the sexual experience for a lot of women — and for some, it's as good as it gets. In fact, in a 2010 survey of over 9,600 women from Esquire, 35 percent of women said it was a necessary part of foreplay — and 10 percent said they preferred it to penetrative sex. Plus, only 10 percent said oral wasn't their thing — so it seems 90 percent of women like oral sex, at least from time to time.

But yet, some women aren't always comfortable having someone go down on them even though they love oral sex. Some describe it as "too intimate" or say that they feel self-conscious and vulnerable. Well, that's exactly what Lorals, new underwear made for oral sex, is trying to combat. It's for women who want to have oral sex, but sometimes find themselves saying no because they're embarrassed. In fact the name Lorals comes from "Love Oral Always. They'll be opening for pre-sales on March 6, so you have some time to see what all the fuss is about.

"I thought of the idea for Lorals after a really romantic vacation," Melanie Cristol, founder and CEO of Lorals, tells Bustle. "Everything about the situation was set up for a no-holds-barred incredibly intimate experience, and I was with someone I loved and trusted. But then in the moment, I found myself saying no to oral sex, even though I really wanted to say yes." You probably know a lot of women who have in the same. In fact, Lorals data found that 80 percent of women have said no to oral sex when they want to say yes.

"I remembered that moment for a while afterwards, and I thought about what my options had been," Cristol says. "We could have used a dental dam, but the idea felt so unsexy, and holding it in place seemed cumbersome. I guess we could have used saran wrap, but that felt beyond insulting and uncomfortable. I wanted a product that turned me on, gave me coverage where I wanted it, and didn't hold anything back when it came to pleasure — but research showed me that nothing like that existed. I decided there needed to be a well-designed product that helped women say yes to oral while helping them feel sexy, beautiful, and confident — whether on a fancy vacation, or in their everyday lives."

So that's what Lorals aims to do — it's an oral sex lingerie designed to make women to do what they really want to do. At first, the idea of oral sex through underwear may sound a little confusing, because it seems like the fabric would get in the way. But it turns out, this isn't really like your traditional underwear at all. They're each designed for single use — you slip them on for oral sex and foreplay — and you're supposed to feel every single thing.

"Sensation was a top priority!" Cristol says. Basically, through a series of prototypes and testing, they've managed to make Lorals incredibly thin and stretchy — so stretchy that a four-inch piece of fabric stretches to 24 inches. And they're only around seven-hundredths of a millimeter thick — which is 5-10x thinner than normal underwear. It means that you can not only still engage in oral sex and even manual stimulation with them on, but that the receiver will still feel it all. "We designed these for women's pleasure above all else," Cristol says. "After all, our mission is to close the orgasm gap!"

They Want To Embrace Oral Sex, Not Body Shame

You may have a knee-jerk reaction to these at first — because it can seem like a product that's a barrier could be telling women they should be embarrassed about their smells and tastes. (Which, by the way, you should never be!) But as Cristol points out, the product is meant to make women feel comfortable and allow them to have the amazing oral sex they want, rather than feeling self-conscious.

"If there’s one thing I’ve learned by developing Lorals, it’s that women have a huge variety of opinions about when they want to get oral sex!" she says. She encountered some women who were happy to have some go down on them first thing in the morning, at the end of the day, or after working out — but some women weren't. For some, self-consciousness was preventing them from saying yes to what they wanted. "I don’t think any of these women are 'right' or 'wrong; — all I know is that every one of them is entitled to oral sex."

Cristol also enthusiastically endorses lots of different resources to help women become more comfortable with their body's smell and taste — as well as feel more powerful in the bedroom generally. "There are some wonderful new sex tech companies that have a mission to empower women through sex ed and communication," Cristol says. "O.school helps people overcome shame, heal from trauma, and develop skills to communicate and set boundaries in their pursuit of sexual pleasure. And OMGYES helps women increase sexual pleasure through educational videos based on groundbreaking research."

It's important to note that Lorals haven't yet been cleared by the FDA as a method of STD prevention at the moment, though they're hoping to clear that hurdle soon. "For Lorals to be used as an STD barrier, they need to be cleared by the FDA first, which can be a lengthy and expensive process," Cristol says. "We’ve manufactured Lorals using several FDA-recommended materials and standards, with the goal of moving through the clearance process as seamlessly as possible. We have three product goals after launching Lorals: to create an STD-protection version of Lorals, to expand to additional sizes, and to add another color option. Everyone who contributes to Lorals’ crowdfunding campaign will get to chime in about which option is most important to them. And within the next 1-2 years, we expect to do them all!" But until then, make sure that you're not using them to prevent the transfer of STDs.

If you feel like self-consciousness is holding you back from doing what you want to be doing in bed, Lorals may be a great choice to let your embrace your sexuality and enjoy the oral sex you deserve.

More like this
How Do I Deal With Both ED & Premature Ejaculation?
By Sophia Benoit
The Best Time To Date After A Breakup, According To Experts
By Bustle Editors
Are Quality Time & Physical Touch Love Languages Compatible?
By Lexi Inks
Is It A Rebound Relationship Or The Real Thing?
By Carolyn Steber and Lexi Inks
Get Even More From Bustle — Sign Up For The Newsletter