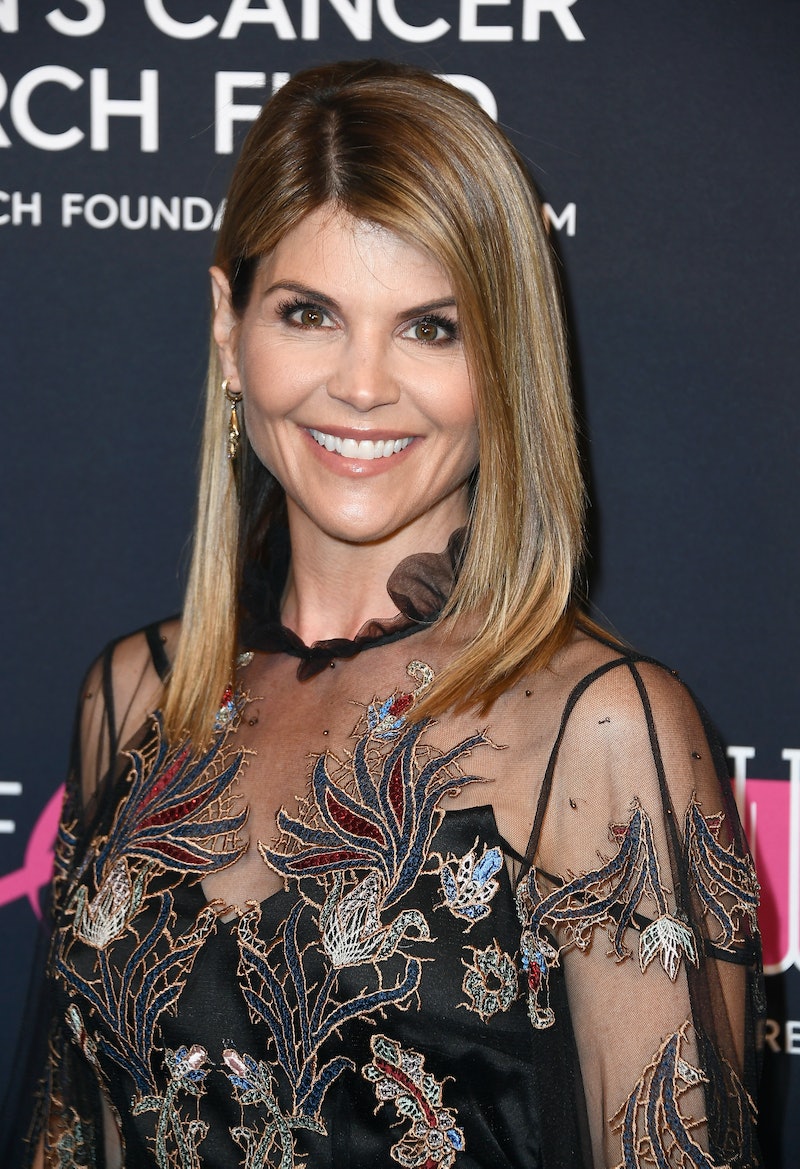 The fallout for the actors allegedly involved in the college admissions bribery scandal continues. On Thursday, Mar. 14, Hallmark has cut ties with Lori Loughlin, as reported by Variety. Hallmark Channel released the following statement to Bustle, confirming the firing of Loughlin, who has starred in 18 Hallmark movies over the last six years:

"We are saddened by the recent news surrounding the college admissions allegations. We are no longer working with Lori Loughlin and have stopped development of all productions that air on the Crown Media Family Network channels involving Lori Loughlin including Garage Sale Mysteries, an independent third party production."

(Additionally, Bustle reached out to Loughlin's rep, but they had no comment at this time.)

The When Calls the Heart actor is among more than 40 people, including fellow actor Felicity Huffman, who the FBI has charged in the largest college admissions cheating scam in American history, according to ABC News.

According to Variety, Loughlin and her husband, Mossimo Giannulli, are charged with allegedly paying $500,000 to have their two daughters admitted to the University of Southern California as rowers, despite neither of them participating in the sport. NBC News reported that Loughlin is facing a felony charge for conspiracy to commit mail fraud and honest services mail fraud for her alleged actions. She was released on a $1 million bail on Wednesday, and the federal court in Los Angeles agreed to let her continue to fly to Vancouver — where the popular When Calls the Heart series and the Garage Sale Mystery movies are filmed — for work, per The Los Angeles Times.

Loughlin has been a key member of The Hallmark Channel since 2013 when the first Garage Sale Mystery movie was released. That same year, When Calls the Heart premiered on the channel, with the Full House actor playing the role of Abigail. Now in its sixth season, When Calls the Heart is a major hit for The Hallmark Channel. Earlier this month, Deadline reported the series had its highest rated premiere yet, with a record 3.1 million total viewers tuning in.

While Loughlin's Abigail isn't the show's main character, she does play a pivotal role in the ongoing series. Given the allegations against the actor and Hallmark's announcement that they're cutting ties with her, it's unclear what will happen to the fan favorite show moving forward. For now, Hallmark will not air a new episode of the series on March 17, and is "evaluating all creative options" in regards to the show, per The Hollywood Reporter.

Additionally, the actor's firing could have a major impact on Hallmark Channel's sister network, Hallmark Movies & Mysteries. In a February 2019 press release, the channel revealed plans to launch a Signature series featuring four installments of each of their popular mystery movie franchises throughout the year, including Garage Sale Mystery. Four movies were in production at the time of Loughlin's arrest, and they were scheduled to premiere throughout the month of August. That's a potentially major blow to the channel's 2019 plans — and at the very least will require a new plan for August's programming lineup.

Loughlin's involvement with Hallmark has been a major part of her career since 2013. It's clear that the allegations against her have made things difficult for the channel, but fans of When Calls the Heart and the Garage Sale Mysteries will have to wait and see if the series and franchise can move forward without the actor.