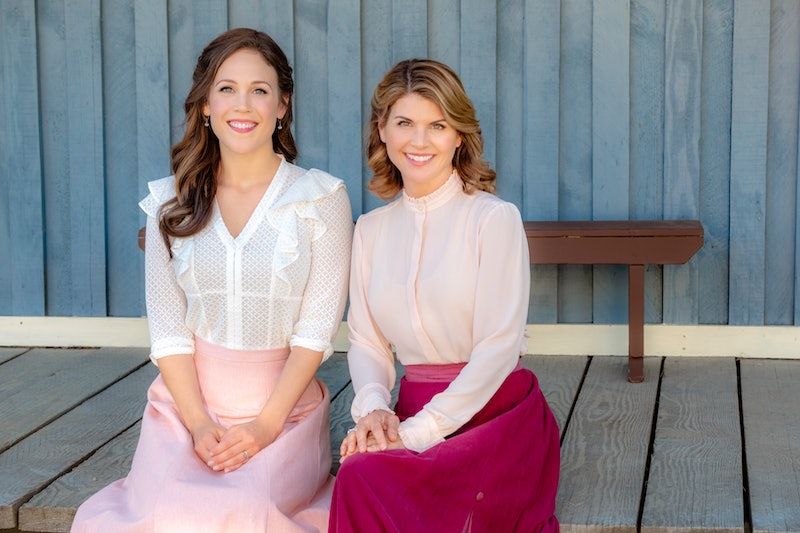 Hallmark's top-rated show is returning for more episodes next year, but it will be missing a familiar face. Lori Loughlin won't be in When Calls The Heart Season 7, just as she wasn't in much of Season 6 either. Hallmark cut the actor from all of its projects after she was charged in connection with the college bribery scandal in March. Although Loughlin has pleaded not guilty, the network quickly disassociated from her.

"We are saddened by the recent news surrounding the college admissions allegations," a statement from Hallmark's parent company Crown Media said, per Entertainment Weekly. "We are no longer working with Lori Loughlin and have stopped development of all productions that air on the Crown Media Family Network channels involving Lori Loughlin including Garage Sale Mysteries, an independent third party production."

EW reported in another article that Hallmark stopped airing When Calls The Heart Season 6 for a few episodes while the show decided how to write Loughlin's character out. Loughlin played Abigail Stanton, who later became mayor of Hope Valley after the loss of her coal miner husband. Deadline reported that when the show returned from hiatus, Loughlin's absence was explained as her having gone "back east" to take care of her mom. Erin Krakow's character Elizabeth revealed the situation to viewers in this opening monologue:

"It's been a week since Abigail got word that her mother had taken ill back east. True to her nature, Abigail wasted no time in rushing off to care for her. Abigail is much more than a friend, she's family. I will miss her and Cody [Abigail's son] deeply — we all will, but we must get by as best we can. In her absence, we must soldier on and we will. We are a community, we are strong, we are Hope Valley."

The show moved on without mention of Abigail, and USA Today reported that Loughlin was removed from all promotional materials and the show's Facebook banner photo. She will likely be absent from any such material when Season 7 returns in 2020.

Loughlin has not made a public statement about her case or being removed from When Calls The Heart. It's likely she has other things on her mind now that it's been revealed how much jail time she could be facing if convicted. According to Business Insider, Loughlin and her husband Mossimo Giannulli have been charged with "conspiracy to commit mail fraud and honest-services mail fraud" as well as "conspiracy to commit money laundering." The charges stem from the $500,000 payment the couple is alleged to have made to get their two daughters into the University of Southern California. Business Insider reported that both parents pleaded not guilty. If convicted, their charges carry maximum sentences of 20 years each, meaning Loughlin could go to prison for up to 40 years if found guilty.

However, if Loughlin is found not guilty, she could wind up back on When Calls The Heart in the future — at least as far as producer and creator Brian Bird is concerned. Good Housekeeping reported that he told From the Desk that he is open to giving Loughlin a second chance. "Some of the fans have asked what will happen to Abigail's character, and shared their opinion that Hope Valley should be an example of forgiveness and grace," Bird said. "As Lori's friend, I could not agree more, and Hope Valley will always be a place of second chances. However, in the real world, having a heart of forgiveness does not mean that justice can be ignored."

And just because Bird is open to forgiving Loughlin doesn't mean that Hallmark necessarily will. While things could eventually change for Abigail's character (she didn't die, after all), don't expect her to be back any time soon. Season 7 of When Calls The Heart will go on without its former mayor.