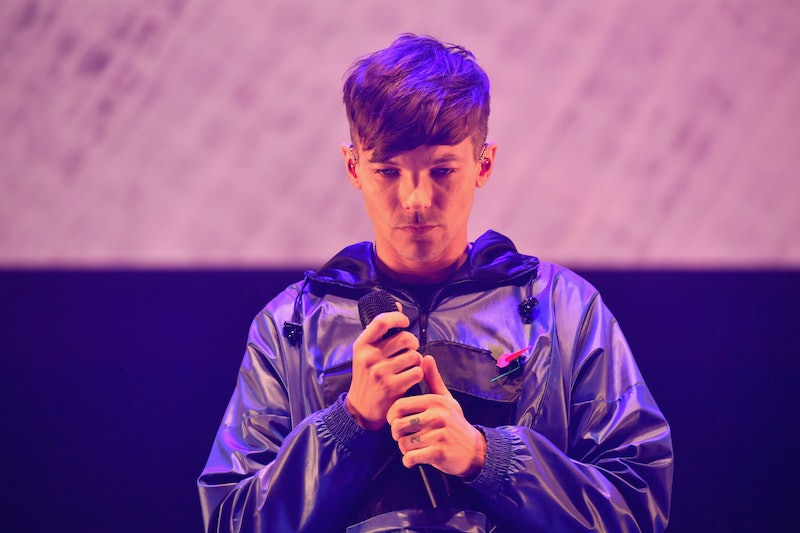 Speaking in an interview with the Guardian, former One Direction member and now solo artist Louis Tomlinson opened up about his mother and sister, both of whom tragically died within three years of one another. The singer's mum Johannah lost her battle with cancer in Dec. 2016, and his younger sister Félicité passed away earlier this year from an accidental drug overdose, as the newspaper reports.

In the interview, Tomlinson spoke of how he dealt with his grief through songwriting, even though he initially struggled to put his loss into words. "After I lost my mum, every song I wrote felt, not pathetic, but that it lacked true meaning to me. I felt that, as a songwriter, I wasn't going to move on until I'd written a song like that," he said.

That's where "Two Of Us" came in, which the singer released in March 2019. In collaboration with two songwriters, Tomlinson was able to open up about the pain of losing his mum. "It was like the song I always wish I'd written," he told the Guardian. "I went in and put my personal touch to the verses. It was a real moment for me in my grief, and as part of the creative process, because it felt like it was hanging over me."

When the song came out, Tomlinson spoke to BBC Radio 1's Newsbeat (via Metro) about his reasons for writing the song: "It was something I needed to get off my chest. I used to lean on my mum for a lot of things — anytime I needed advice on something she would be the first call I made."

He continued: "There is a lot of fight in life and I just get on with it. I'm quite a positive person but there's no two ways about it — it's sad what happened to me. [But] I don't want people to get caught up in the sadness of it. The song should be hopeful."

Two months after the release of that single, the singer's sister sadly passed away also. When the Guardian's Emine Saner suggested that these losses must have "put a perspective on [his] pop career," Tomlinson replied: "Exactly ... That whole dark side I've gone through, it sounds stupid to say, but it gives me strength everywhere else in my life, because that's the darkest s**t that I'm going to have to deal with." He continued: "So it makes everything else, not feel easier and not less important, but, in the grand scheme of things, you see things for what they are, I suppose."

Tomlinson has been able to harness a newfound strength through the support of his family, friends, and fans — the latter, he notes in his interview with the Guardian, have played a unique role. "I'm sure every artist says this, but I do believe it. We've been through some dark times together and those things I've been through, they carry a weight, emotionally, on the fans as well," he said. "And I felt their love and support. I remember really clearly when I lost my mum, that support was mad."

The singer also found a lot of his strength and happiness through his son Freddie, as he mentioned on Lorraine in April 2019. "I have said a few times, it's the responsibility side of things that have made the process a little bit easier for me," he told the daytime TV host, before continuing: "You feel so much love and it doesn't matter what's going on, in that moment that's all you are thinking about. Those times with him are priceless."

Despite losing his mum and sister in such a short space of time, Tomlinson told the Guardian that he will always have hope. "I keep going back to it, but I don't know if it's a combination of where I grew up and my mum's influence, but I just have this luxury of being able to see the glass half-full no matter what." He continued:

"[T]here's no time for me to be sat feeling sorry for myself. I've been to rock bottom and I feel like, whatever my career's going to throw in front of me, it's going to be nothing as big or as emotionally heavy as that. So, weirdly, I've turned something really dark into something that empowers me, makes me stronger."