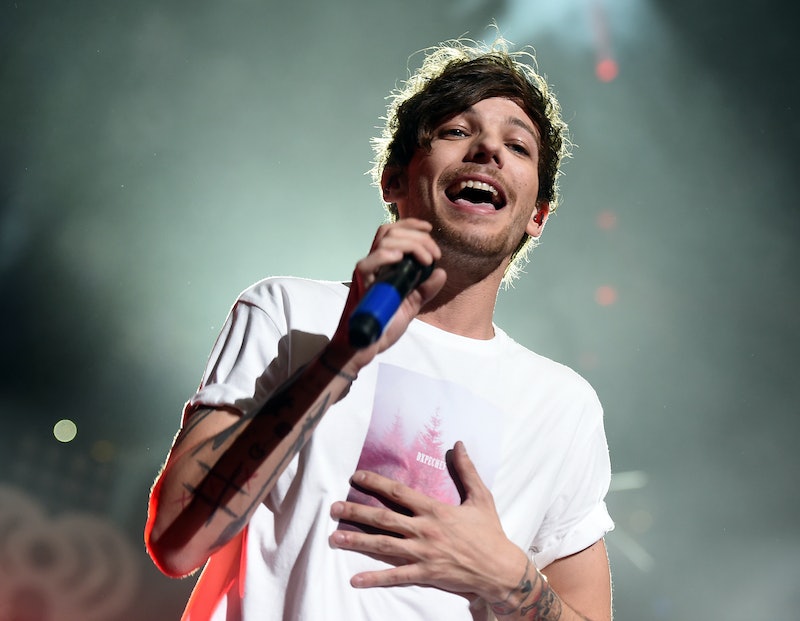 Ever since One Direction called it quits in 2016, its members have been really hitting their solo careers hard. They used to tour the world, please their screaming fans, and create number one hits together, and now they're all doing it on their own. Louis Tomlinson's new song "Two of Us" is the most recent release from his solo endeavor, and it's also his most emotional — the track is dedicated to his late mother.

On March 7, Tomlinson released his newest single, "Two of Us," a slow track filled with meaningful lyrics. As fans know, the singer had a very close relationship with his mother, Johannah "Jay" Deakin. Family means a lot to Tomlinson, who is the eldest of six kids, and so writing this song to his mom, who passed away December 2016, was just something the singer felt he had to do. "It ["Two of Us"] was something I needed to get off my chest," Tomlinson said in an interview with BBC Radio 1 Newsbeat. "I used to lean on my mum for a lot of things — anytime I needed advice on something she would be the first call I made."

The singer's past singles as a solo artist have been a bit more upbeat, but, as reported by Metro, Tomlinson's mom really loved a good slow song. "She would have loved it, she was a fan of ballads," he said. "My mum wasn’t about feeling sorry for herself. Again that’s what gives me pride and comfort singing the chorus. It feels really liberating." He added that he wanted fans to feel optimistic when the listen to the song, despite its heartbreaking inspiration. "Hopefully when people listen to it they don’t get caught up in the sadness, it should feel hopeful," he said.

Understandably, the song was hard to get through. "I just had to bite the bullet and f*cking do it," Tomlinson said according to Metro. "I knew I needed to write this song, but I was a bit scared of it." In the BBC Radio 1 interview, he described himself as "quite a positive person," but added that "there is a lot of fight in life and I just get on with it... there's no two ways about it... it's sad what happened to me."

Tomlinson has been doing his best to take care of his six siblings since his mother's passing, and he said that playing the song for them was a whole different type of emotional. "Me as their big brother... if I can sing those words it'll hopefully help them too," he told BBC Radio 1.

And his hope for fans to gain something from the song has already been realized by many. Many devoted fans took to Twitter to share their own emotional reactions to "Two of Us," not only expressing what it means to them, but also how much they support Tomlinson and maybe most importantly, how much his mother would have loved it.

Speaking with BBC Radio 1, Tomlinson revealed that this song is the "next step" in the grieving of his mother, and that he'll "be drifting off" in thoughts of his mom whenever he performs it. And it looks like fans are more than ready to be right their with him when he does.