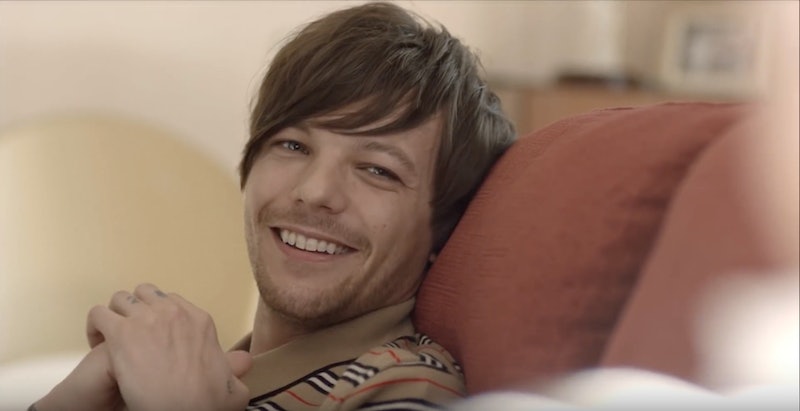 Louis Tomlinson knows the feeling of dealing with immeasurable loss better than most people, having lost both his mother Johannah Deakin to leukemia in 2016 and sister Félicité Tomlinson in March 2019. But recently, the singer decided to help out someone who’s been going through his own loss, and he documented the process in a new video, set to his devastating single “Two Of Us," released on Wednesday, April 24. Louis Tomlinson’s new “Two Of Us” video might just inspire you to complete your bucket list — and will definitely cause you to shed more than a few tears.

Richard Green, a Yorkshire native, lost his wife of over 60 years, Pat, to Alzheimer’s Disease in December 2016, around the same time that Tomlinson’s own mother died. In the video, which includes their meeting, their shared loss helps them form an instant connection, which, over the course of the clip, becomes an unlikely but utterly heartwarming friendship. As noted in the video, Green still had a bucket list of things he wanted to do in his lifetime, and the singer wanted to help him check off every remaining item on the list, a momentous task for anyone.

“A month or so ago, I met an amazing man named Richard,” Tomlinson explained in an Instagram post. “He had a few things he wanted to do so I thought I’d help him out." The singer continued, "This video feels particularly relevant and powerful to me. Richard is a classic example of a fearless man who in light of tragedy still pushes himself to live with as much laughter and happiness as possible. I hope you enjoy watching this video as much as I did making it.”

Together, the dynamic duo went on a little daredevil streak, becoming helicopter pilots and race car drivers for a day. Green also wanted to get a tattoo, but ended up giving Tomlinson one instead, adding to the performer's ever-growing collection. The former One Direction member also helped Green complete perhaps the most daunting task: riding a rollercoaster. “Richard, did you enjoy it?,” Tomlinson asked Green afterwards, to which he responded with a fitting, “I don’t know."

But the moment that will have fans reaching for the tissue box is when Tomlinson brought Green out on stage in front of a screaming crowd of thousands at an X Factor Live concert so he can live out his lifelong dream of singing on stage. Perhaps the judges might see him audition for the talent show next season? It would make for an incredible full-circle ending.

Already, Directioners have taken to social media to exclaim just how proud they are of Tomlinson for making Green the focus of his new video. “Instead of putting money into a music video, Louis put that money towards doing what was on an elder man’s bucket list and if that doesn’t show you how big this man’s heart is then I don’t know what will,” fan @bohemianlou remarked.

Those fans also include 1D bandmates Liam Payne and Niall Horan, who both commented on his Instagram post and commended him for making the video, according to @alloflouspeople, who posted what seemed to be a screenshot of the comments on Twitter.

Regardless of what lies in the band's future (fingers still crossed for a reunion), Tomlinson has proven that he can serve a bigger purpose in life with his new video.