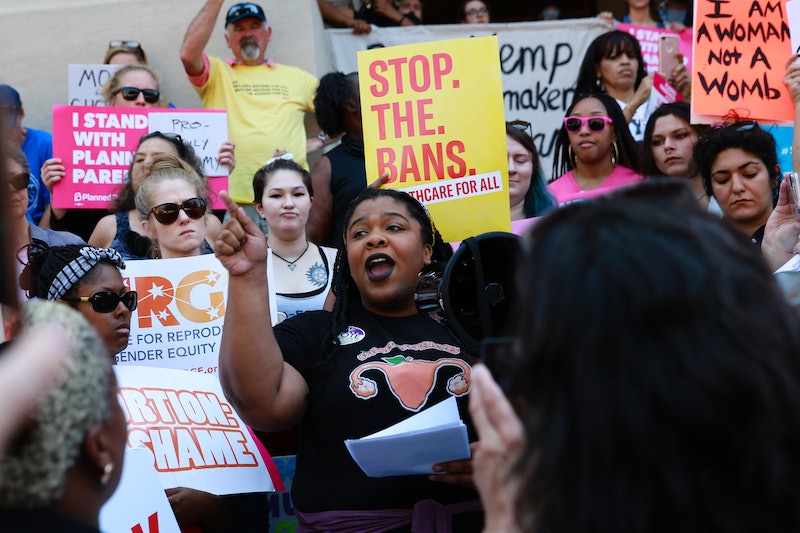 Almost a week after Louisiana Gov. John Bel Edwards signed a six-week abortion ban into law, state lawmakers passed additional legislation designed to chip away at reproductive health care access. According to the Associated Press, Louisiana's 2020 anti-abortion ballot measure passed by both the state House and Senate on Wednesday would let voters decide whether or not to eliminate abortion protections from Louisiana's constitution.

As a result of this legislation, voters who head to the polls in November 2020 will encounter a ballot measure asking them whether or not the state's constitution should contain anti-abortion language, per The Advocate. If voters decide that they do want such language, it would read as follows: “To protect human life, nothing in this constitution shall be construed to secure or protect a right to abortion or require the funding of abortion.”

The legislation was proposed by Democratic state Rep. Katrina Jackson, who decided to change the ballot date from this October's gubernatorial election to next year's presidential election. According to the AP, Jackson said that her fellow lawmakers were concerned about this legislation affecting whether or not people like Edwards — an anti-abortion Democrat — would be elected in statewide elections.

“When it was suggested by some colleagues that this may kind of impact whether or not somebody gets elected or not, I don’t want a constitutional amendment I propose to ever impact that,” Jackson said, per the AP. “I had members on both sides of the aisle arguing about who it was going to drive out.”

According to The Advocate, abortion access in Louisiana would not immediately be impacted if 2020 voters decided to enshrine anti-abortion language in their state's constitution. Supporters of the legislation reportedly hope that it would eventually defend the state's six-week abortion ban in legal battles, on the basis that abortions would not be protected by Louisiana's constitution. The provision would be particularly relevant if, for example, anti-abortion groups were successful in overturning Roe v. Wade.

“This is strictly a bill to say that Louisiana is a pro-life state,” Republican state Sen. Beth Mizell explained, per the AP.

Conservative lawmakers in many states have been slowly working to restrict abortion access, in the hopes that legal challenges will bring about an end to Roe v. Wade and that states will ultimately be able to decide whether or not to allow abortions. State lawmakers know that their increasingly restrictive anti-abortion legislation is unconstitutional, the Los Angeles Times reported, but they hope that legal challenges to these abortion bans will generate a shift in constitutionality.

The decision to place an abortion rights measure on the 2020 ballot wasn't the only anti-choice bill passed by Louisiana lawmakers this week. Also on Wednesday, both chambers passed legislation requiring medical abortions to be performed in one of Louisiana's three licensed abortion clinics, rather than in a gynecologist's office. This legislation is now on its way to Edwards' desk.

State Sen. Karen Carter Peterson — who chairs Louisiana's Democratic Party — condemned both pieces of legislation, which supporters from both parties have described as "pro-life."

“You’re disrespecting women and you really don’t care,” Peterson said, per the AP.