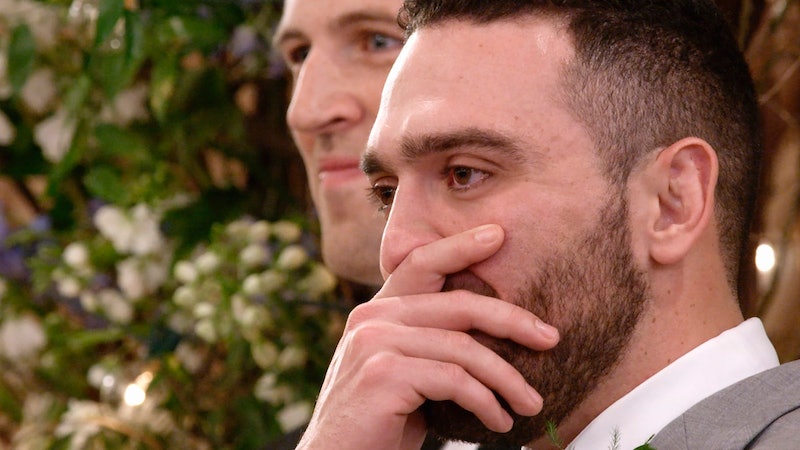 Spoilers for Love Is Blind Season 1 ahead. There's potentially nothing more embarrassing than being left at the altar. Unless the person who leaves you at the altar then accuses you of not being ready for marriage, which is exactly what happened after the finale of Netflix's newest hit show. Love Is Blind contestant Mark responded to Jessica saying he wasn't ready to marry her, and he remembers things a little differently.

Mark responded to Jessica's recent claim that they both weren't ready to marry each other on Love is Blind in a new interview with Entertainment Weekly. "Honestly, with Jess I didn’t know what to expect," he said. "I went in same as the experience as I’m just going to be myself and whatever I feel in the moment. She walked down that aisle and it’s this moment of holy sh*t, this is what the pods, this whole thing, was all about. I like blacked out because I was so present in the moment of what I was feeling."

Mark hasn't watched the finale yet, but he perfectly remembered how he felt in the moment when Jessica left. "You find this love, I was 100 percent in it, you have this feeling of like, that person didn’t pick you," he said. "But the experience was so intense, I wasn’t even mad at her. I was upset and disappointed but I wasn’t angry. It just hurt, you know?"

In her own interview with EW, Jessica explained why she left Mark at the altar, revealing that she wanted to quit the show before their planned wedding, but felt like she couldn't leave, something which the show's creator Chris Coelen denied. "They obviously could back out of it or not go through with it if they wanted to," he said, referencing another couple who broke it off before their nuptials. "Nobody was forced to do anything."

Jessica also claimed that Mark wasn't ready to get married either. "I knew I didn’t want to marry him, we weren’t ready for that, and we actually had multiple conversations and we were both on the same page about that," she explained, saying it was "psychological warfare" for them to plan a wedding that she claims neither one of them wanted.

Despite being left at the altar on television, Mark told EW that he has no ill will toward Jessica. "She’s always going to have a special place in my heart," he said. "I wish her nothing but the best and success in any relationship, career, whatever she decides to do."