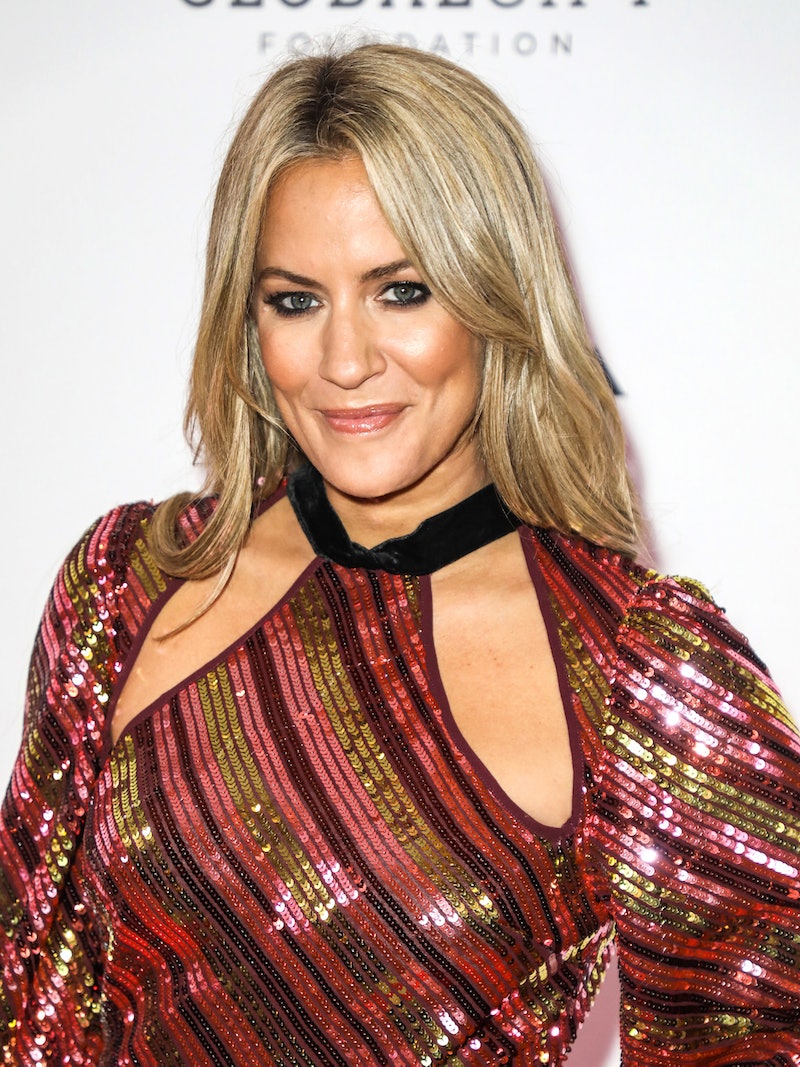 A little over a month after stepping down ahead of the UK show's first winter season, former Love Island host Caroline Flack was found dead in her London apartment at the age of 40. According to The Sun, Flack's family confirmed the tragic news on Saturday by issuing a brief statement to the outlet. "We can confirm that our Caroline passed away today on the 15th February," the statement reads. "We would ask that the press both respect the privacy of the family at this difficult time." While no cause of death has been confirmed, multiple British outlets reported that Flack was found "unresponsive" in her home. Bustle has reached out to Flack's representative for comment on the presenter's death, but did not hear back at the time of publication.

Update: An ITV spokesman shared the following statement with Bustle: "Everybody at Love Island and ITV is shocked and saddened by this desperately sad news. Caroline was a much loved member of the Love Island team and our sincere thoughts and condolences are with her family and friends."

Update Feb. 16: A second statement from ITV noted that Love Island would not air on Sunday, out of respect for the late presenter. “Many people at ITV knew Caroline well and held her in great affection. All of us are absolutely devastated at this tragic news," the statement obtained by Bustle read. "After careful consultation between Caroline’s representatives and the Love Island production team and given how close we still are to the news of Caroline’s tragic death we have decided not to broadcast tonight's Love Island out of respect for Caroline’s family. Love Island will return tomorrow night which will include a tribute to Caroline who will be forever in our hearts."

Earlier: Flack — who began hosting Love Island back in 2015 — stepped down from the show after being charged with assault on Dec. 13, as the result of an alleged altercation between Flack and her boyfriend, Lewis Burton. The Evening Standard reported at the time that the TV personality had allegedly hit Burton over the head with a lamp, resulting in him allegedly calling the police and telling them that Flack "tried to kill me."

Flack pled "not guilty" to the assault charges while appearing in court in December, and her lawyer stated that Burton hoped the case would be dropped. Burton has continued to stand by Flack in the wake of the alleged altercation, and defended her on his Instagram Story shortly after her arrest. "I'm tired of the lies and abuse aimed at my girlfriend. This is not a witch hunt this is someone's life," he wrote on his Instagram Story, before declaring that Flack was "the most lovely girl. Loyal and kind." The Sun also reported that on Friday, Feb. 14, he proclaimed his love for Flack with a Valentine's Day post on his Instagram Story, just one day before her death.

While Burton has not yet publicly commented on Flack's death, several celebrities have reacted with sadness to the news on social media, with many pointing out the negative treatment from the media in the wake of Flack's arrest. "It was only a matter of time before the media and a prolonged social media dogpile, hers lasted for MONTHS, pushed someone completely over the edge," Jameela Jamil wrote on Twitter. "Rest In Peace Caroline Flack. This is f*cking horrendous.

Comedian Jack Whitehall echoed those sentiments in a post of his own, writing that Flack was a "fun, kind [and] beautiful person," and adding that it's "so unfair that this has happened." He continued, "Let’s pray we learn from this and remember to be a little bit more compassionate to people when they are down."

Flack is the third person associated with the UK's edition of Love Island to have died in the past year. In April 2019, the BBC reported that Season 2 contestant Sophie Gradon had taken her own life; in March, Mike Thalassitis, who appeared on Season 3, was found dead in a park near his home. His death was later ruled a suicide. "Love Island has been my world for the last five years, it's the best show on telly," Flack wrote on her Instagram Story in December, before announcing that she had decided to step down from hosting the show "in order to not detract attention" from the upcoming series.

More like this
'Love Island’s Kai Fagan Is Very Clear About What He Doesn’t Like
By Sam Ramsden and Darshita Goyal
This Pre-'Love Island' Video Of Olivia & Zara Together Changes Everything
By Bustle UK
Laura Anderson Pulled The Ultimate Girl Power After Her Break-Up
By El Hunt and Megan C. Hills
'Love Island's Jess Wynter Is Keen To Avoid Making This Mistake Again
By Sophie McEvoy
Get Even More From Bustle — Sign Up For The Newsletter
From hair trends to relationship advice, our daily newsletter has everything you need to sound like a person who’s on TikTok, even if you aren’t.