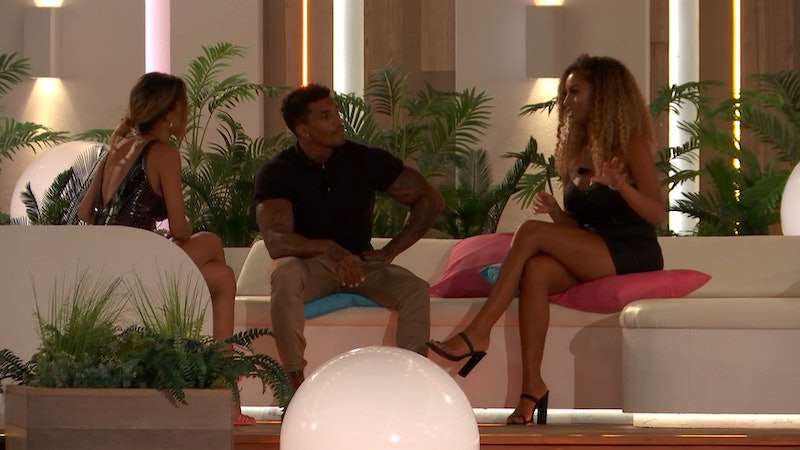 Love Island frequently comes under scrutiny for its decision to omit certain relationships and events from the onscreen narrative — remember last year's series, when Samira Mighty and Frankie Foster's Hideaway scenes were never aired, part of a deeply problematic pattern of the show sidelining Samira? "That was so weird when I came out," Samira said on The Big Narstie Show. "It was really exciting, and then they didn't show it. So I was like, 'Cool'." Now, Love Island's Joanna Chimonides has said she and Amber Gill were actually friends in the villa, telling Metro that the pair "really got along."

"My personality wasn’t shown as much throughout my time in there," Joanna told Metro, adding, "but also mine and Amber’s relationship wasn’t shown enough." Instead of the love rivals the show attempted to paint them as, she said, they were actually good friends. "We did each other’s makeup and hair, and it would have been nice for viewers to see that," she said.

What's more, Joanna praised Amber's recent decision to couple up with Greg O’Shea despite Michael Griffiths' renewed interest, saying on her Instagram story, "‘I am actually really proud of her, I’m not going to lie." She added, "That was probably one of the hardest decisions that she was going to have to make and she did so well."

Amber's mum, Vanessa Gill, was also delighted when Amber picked Greg over Michael, telling the Mirror, "She knows her self-worth and she’s not going to be mugged off."

Like many of us, Vanessa's a big fan of Amber and Ovie's friendship — though she wishes it could become something more. "I wish she liked Ovie in a romantic way. He’s a gentleman," she said. "We love him as a family and he’s definitely welcome here. You can tell they love each other and have got each other’s backs." Whether in a relationship or just friends, can we please find a way for Amber and Ovie to win?

More like this
This Pre-'Love Island' Video Of Olivia & Zara Together Changes Everything
By Bustle UK
Every Season Of 'Love Island' Ranked Best To Worst
By Alice Broster, Frances Stewart and Sophie McEvoy
ITV’s New Take On 'Love Island' Is Only For MILFs & DILFs
By Sam Ramsden
Twitter Can’t Get Over Stormzy’s Surprise Cameo On Winter 'Love Island'
By Sophie McEvoy
Get The Very Best Of Bustle/UK
Sign up for Bustle UK's twice-weekly newsletter, featuring the latest must-watch TV, moving personal stories, and expert advice on the hottest viral buys.