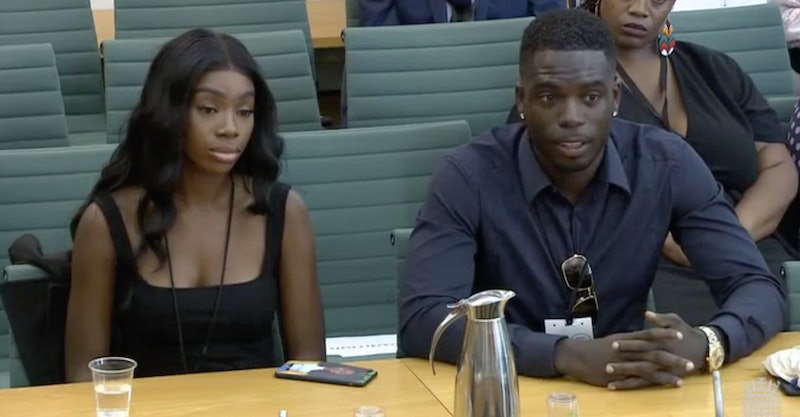 You might be used to seeing them lounging around the fire pit or stressing about the prospect of a re-coupling, but rarely would you imagine the Love Island contestants at a Parliamentary hearing. However, that's exactly what happened this week when Marcel Sommerville & Yewande Biala gave evidence to MPs during an inquiry conducted into reality TV. The pair spoke about their experience on their show, and their accounts were pretty revealing as to what islanders face after summer is over and they leave the villa.

The Department of Digital, Culture, Media, and Sport select committee is currently conducting an inquiry into the experience of reality TV contestants before, during, and after being on television. This inquiry comes after the tragic deaths of Mike Thalassitis and Sophie Gradon, who both took part in Love Island, and Stephen Dymond, who appeared on The Jeremy Kyle Show.

Speaking about his experience, Sommerville revealed that the worst part of the show is going back to “normal” life, dealing with public scrutiny, and having your personal life splashed across social media. He said, “You are in the spotlight. No matter what you do, anything that happens there is going to be a story about it. Public break-ups, everything that happens. You are like, 'this is the worst period of my life.' That was the worst period of doing Love Island.”

Biala and Sommerville joined the select committee, which is chaired by Conservative MP Damian Collins, to explore the support that’s in place for the islanders.

After the death of former Love Island contestant Mike Thalassitis in March 2019, ITV said they were committed to reviewing how they could support contestants throughout the entire process. In a statement sent to Bustle UK back in March 2019, ITV confirmed that they "work with both an independent GP and a psychological consultant" to assess anyone shortlisted for the show, and that the "care continues whilst the Islanders are in the villa" with a medical team (including a psychological consultant) on location during filming.

After the show, "every Islander has a series of debrief meetings on location with the executive team and the medical team, including the psychological consultant," the statement read. "After this, they are told how to access after care support as well as information on seeking professional representation. They also meet with the press team the day after leaving the villa and are briefed and advised on their press coverage whilst in the villa." They are also given financial and social media training, according to the statement.

Speaking to the committee, Sommerville — who took part in the show before changes were made this year to ITV's duty of care process — said, “You are kind of left to your own devices. It wasn't like a big thing of them contacting you. It wasn't much of a 'how are things going now.'”

Sommerville also discussed the racial abuse he received via social media after leaving the villa. "There are a lot of trolls," he said. "I didn’t get told how to tweet … there were people with no followers sending racist stuff, I eventually worked out how to block certain words but I did that off my own back." He continued: "I was the first fully black contestant to appear on the show, as the years have gone on you can see they’ve tried to add more diversity ... they’ve definitely made a conscience effort to address that."

The committee are also evaluating the issue of body diversity on shows such as Love Island. Biala expressed that more body diversity would be beneficial, stating "It would be nice if people of different body shapes applied to the show. That would make a massive difference in terms of casting." However, she also said she didn't feel a huge amount of pressure to look good, but it was something that came naturally anyway. “If you knew you were going to be in a bikini for eight weeks, you would want to look your best.”

In their meeting with Dwayne Davison and Robert Gregory, two former Jeremy Kyle guests, the select committee heard that the show had "ruined" Davison's life, while Gregory said "They crucified me. They absolutely ripped me apart." He also stated: "There is no aftercare, it doesn't exist." Davison expressed that appearing on the show affected his mental health, including experiencing suicidal thoughts.

According to the BBC, after the hearing, an ITV statement was issued saying: "As a producer and broadcaster ITV takes its responsibilities around duty of care to participants very seriously. Supporting the physical and mental health of everyone involved in our programmes is our highest priority.

The statement went on: "We were truly sorry to hear that Dwayne was experiencing mental health problems and suicidal thoughts and have apologised to him that we did not remove the clips from our official ITV YouTube channel. We have offered to pay for counselling, as he has requested."

The support that reality stars receive after they find stardom is definitely a hot topic right now, and let's hope the findings of this inquiry will bring about positive change where it’s needed.