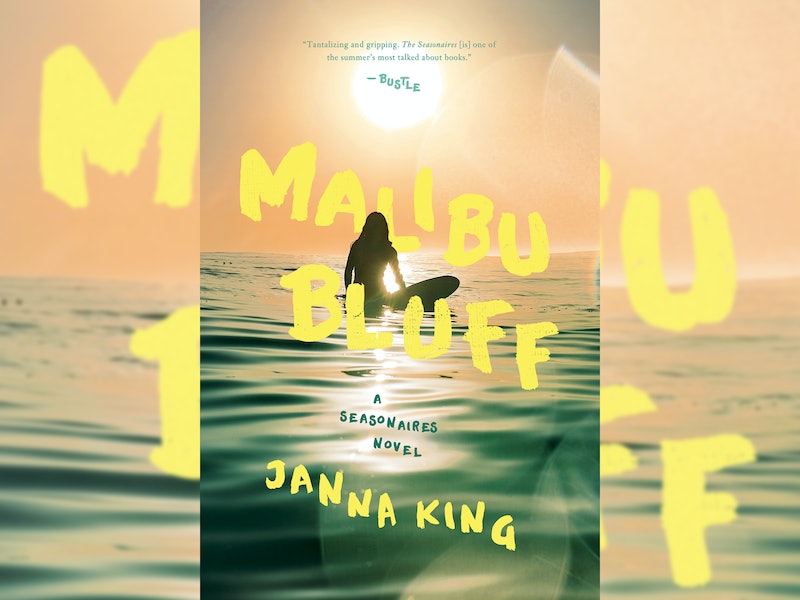 If you loved getting caught up in the drama, mystery, and suspense of Janna King's genre-bending debut The Seasonaires this past summer, then I've got some great news for you: a follow-up novel is coming next spring. The seasonaires are headed to California in Malibu Bluff, and although you have to wait until next beach reading season to get your hands on what is sure to be another sizzling summer novel, Bustle has a look at the cover and an exclusive excerpt below.

In this suspenseful follow-up to The Seasonaires, six twenty-somethings, including Mia who is trying to escape the grief following her mother's death, have been selected by Lyndon Wyld to be brand ambassadors of her namesake clothing line. This season, the lucky group will be snapping Instagram photos at fancy Hollywood parties and on the gorgeous beaches of Malibu while Presley, after being falsely accused of murder, runs Lydon Wyld's public relations from Los Angeles. But not all that glitters in gold, even in California, and soon enough, detractors from Mia's past come back to shake up her present as the line between reality and social media staging begin to blur.

An exciting follow-up to one last summer's most intoxicating beach reads, Malibu Bluff will have you dreaming of warm weather and sunshine. I mean, just look at the cover:

If that beautiful cover isn't enough to entice you into putting Malibu Bluff on next summer's TBR list, this titillating excerpt certainly will be:

Mia and Brandon made their way down the steps to the beach where the “Sixties Flower Children” scene was more current up close because of the deejay with his laptops and mixers, and the party’s co-sponsors with their signage and swag.

The seasonaires and guests drank elderberry wine from a Malibu winery that prided itself on the fact it was not from the usual Northern California wine country. The two blonde girls with beach-wavy extensions manned the table. They reminded guests that “millennials are drinking more wine than any generation” as a push to sign up for the “Counter(Wine)Culture Club.” Membership meant a new bottle of the sweet nectar every month.

A colorful spread of hummus, pita, olives, and grapes was arranged on a long wood table sprinkled with daisies and wildflowers.

“This makes me imagine a time when peace and love were actually a thing.” Eve fed red grapes to Wyatt. The two were entwined on a jumbo corduroy beanbag chair underneath the tie-dye overhang wound with vines. Nils and Chase passed a joint, smoked from a hookah and drank straight from a wine bottle. Boomer, with his pushed-in bulldog snout, snored on a small heart-shaped pillow nearby.

A voluptuous girl, braless in a tank top, bounced by towards a friend. Nils winced. “With those saggy puppies, that is not a good look.”

Mia glared at Nils who, with Wyatt, had all but moved into the house despite the fact that they weren’t seasonaires. “You know that natural boobs are bags of fat, right?” she said. “And there’s this concept called gravity so if you take away the bondage device—” She motioned to her chest, strapped in a bra beneath her dress. “—gravity pulls them towards earth. Your dick flops around and it’s pulled earth-ward. It’s not at a salute all the time.”

Nils grabbed his crotch. “Speak for yourself.”

Brandon looked at him, deadpan. “She doesn’t have a dick.”

Mia knelt to pet Boomer so her face was next to Chase’s. “Your friend really doubled down in the douche department.” She walked off with Brandon through rows of electric candles that created shimmering, winding paths around patchwork blankets. They approached a bonfire where Alex and Oliver sat with a group of guests, all dressed boho-chic for the occasion. At the tip of the circle was a thin guy with Patrician features shrouded in a bushy beard and mustache. He strummed an old, scratched acoustic guitar covered with worn and torn stickers: a peace sign, a rune symbol of some sort, and the M-Kat Records logo.

Mia stared in disbelief. “Is that—?”

“Seamus Galloway,” said Brandon, his voice thick with disapproval. “My dad’s into this whole unplugged revival. It puts me to fucking sleep.” He strode off. Mia stood alone, listening to Seamus’s music which was at best, mundane.

“That hair took two hours and more product than you own.” Her arms were crossed in a paisley shift dress, Lucite earrings and a modified bouffant. Mia noted Seamus’s stringy shoulder length hair as he finished the song to applause and whistles. When it quieted, Presley, in her flirtiest Georgia peach twang, called out, “Those bracelets are positively divine.”

In his charming Scottish accent, Seamus revealed that they were handmade by the jeweler wife of one of his “good mates” who was also one of the world’s biggest action stars. “Soon ‘nough, you’ll all be able to wear ‘em, too.” Excited murmurs bubbled thru the crowd.

Presley leaned in to Mia. “Those bracelets are Lyndon’s next frontier: a line of jewelry with celebrity artisans.” She eye-fucked Seamus. “I would like to put those beads somewhere. But I should keep it professional, even though he sang me his newest song yesterday at the office...with a giant boner.”

“I’m glad you’re taking your job as publicist seriously,” said Mia, knowing that shoulds didn’t apply to Presley, whose patchouli perfume was a departure from her signature jasmine-orange blossom scent. They watched Oliver pull a quarter from a pixie girl’s ear while Seamus took a selfie break. “I had a date with a guy who did a magic trick for me once,” said Mia. “I bailed after ten minutes. The same would hold true for a serenade. That’s beyond cheesy.”

Presley frowned at Mia. “Where’s your sense of romance, sugar?”

“Says the woman who wants to do bad things with those beads.” Mia lifted an eyebrow at Seamus’s bracelets.

She and Presley approached Oliver and Alex, who wore Lyndon Wyld flare jeans and a purple silk blouse knotted at his chiseled waist. Presley sat with her bare legs tucked beneath her and gave Alex’s thigh a squeeze. “Honey, your ass looks amazing in that denim! I spotted it from the steps.”

“That’s the goal.” Alex ran his hand through his close-cropped hair and touched one of his over-sized silver hoop earrings.

Mia sat and smiled at him. “You do look gorgeous.” She wished she had half as much genuine confidence as he did.

Alex kissed Mia on the cheek. “You’re sweet.” He shifted to Presley. “You, not so much.”

Oliver scanned the scene. “The last time I went to a party, a girl from my dorm was in that outfit—” He pointed to the girl taking a selfie with Seamus. She wore a tiny tube top and even tinier shorts. “It was below-twenty in Madison and she passed out on the porch. No one found her ‘til morning.”

Oliver nodded with a grimace. “I don’t want to think about it.”

“Then don’t,” said the pixie girl who held out a baggie filled with pastel pink and blue pills embossed with smiley faces. Oliver hesitated. He twisted his watch around his wrist twice, then plucked out one pill. Alex took one as well. They toasted with their wine and swallowed. The girl offered the baggie up to Mia.

Presley nudged her. “Live a little, Mia. One of us should be having fun here.”

Mia passed, lifting her wine to the girl. “I’m good.”

Female screams filled the air as Seamus started another acoustic tune. Then he played another. They all sounded the same to Mia, like the repetition of the waves she watched. She caught sight of a man walking along the shore. He was a shadow in the darkness, but the moonlight caught the silver streaks in his hair and white plastic sunglasses. A chill ran up Mia’s spine. Otto Hahn. Repelled, she tried to focus on Seamus’s innocuous melodies, but was compelled to check the shore again. Otto—or the shadow—was gone. She finished her wine and took another cup from one of the blonde girls who walked by with a tray.

“Sign up online. I got it.” Mia pasted on a closed mouth smile.

She downed the second glass—sweetness bathing her mouth, warmth filling her body in the cool night. She snuggled into her buzz, reminding herself to feel grateful that she wasn’t in Southie where she had spent many muggy summers feeling stifled. And this wasn’t Nantucket.

More like this
Mike Flanagan Teases 'The Midnight Club' In This Exclusive, Creepy Clip
By Grace Wehniainen
Everything Prince Harry Is Likely To Address In His "Wholly Truthful" Memoir
By L'Oréal Blackett and Sophie McEvoy
Craig David Is Still Slicker Than Your Average
By Olivia-Anne Cleary
The BBC Is Adapting A Best-Selling Novel About A Mistaken Killer
By Darshita Goyal
Get Even More From Bustle — Sign Up For The Newsletter