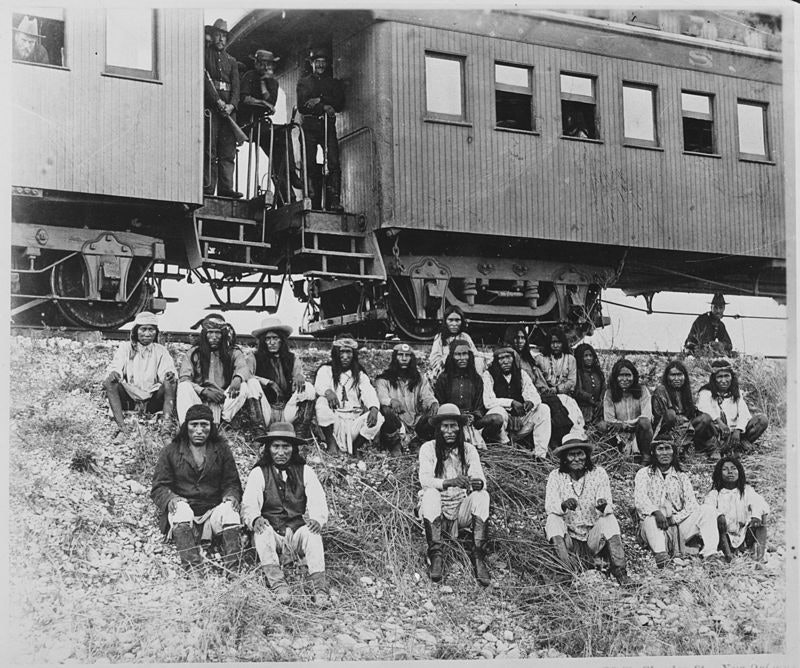 Through the month of March, Women’s History Month “commemorates and encourages the study, observance and celebration of the vital role of women in American history,” according to the official Women’s History Month website. But what about the stories and roles of women that predate the founding of America? There are not many written accounts of the vital roles the original women of this nation had, and yet their descendants and histories cloak the land.

One such account came to my attention in the form of a love story between a Chihenne Chiricahua Apache woman named Lozen and a Mescalero Apache woman named Dahteste, that was shared with me at a discussion on two-spirit wellness. (Two-spirit is a name for people in Indigenous culture who carry the duality between the sacred feminine and sacred masculine within them, though definitions vary per Indigenous nation and person).

It was a brief retelling that was part of a much larger discussion, but for so many reasons and all at once, I was brought to tears. Listening to another two-spirit person introduce a love story that centered on two openly queer, traditional Apaches rocked me to my core. I have long known about these women, but never heard anyone introduce them in the context of being two-spirit people, or partners.

I heard in this retelling that even as a child, Lozen demonstrated prolific abilities beyond her years. She emerged as a leader within her community before becoming a medicine woman and a warrior for her tribe. Throughout her life (1840-1889), she eschewed the traditional roles of Apache women, favoring the art of war, never married a man, and was often described as being more masculine than other men in her tribe. Her brother, Chief Victorio, described her as his “right hand” and “a shield to her people,” according to the Encyclopedia of Lesbian, Gay, Bisexual and Transgendered [sic] History in America.

While her physicality, strength, and fearlessness was deeply honored, she was also a highly renowned and respected medicine person, possessing a wealth of knowledge about the medicinal properties of plants and minerals. Because she was deeply connected to the earth and its elements, her people honored her ability to detect danger and enemies when they were near. When in ceremony Lozen would sing, extend her arms, and turn in a circle until her palms tingled, which let her know where the enemies were coming from. After her brother was killed and journeyed to the spirit world, she banded with Goyatła (aka Geronimo or, “One Who Is Yawning”) to exact revenge on the colonizers that had stolen him and their land, according to KQED. In what is now known as southern New Mexico, she met the woman she would soon come to love, Dahteste.

According to Cristoso Apache, writing for the Qualia Folk Encyclopedia of Gay Folklife, Dahteste was also a warrior since her youth and, despite being married with children, spent a significant amount of time riding with Cochise’s band against the current of Western Expansion. Some years later, she joined Goyatła’s band and rode alongside both him and Lozen. Unlike her partner Lozen, Dahteste was known for being a well-kempt woman who was fluent in English and acted as a translator for the bands that she traveled with. After helping Geronimo escape from detainment at the San Carlos Reservation in 1885, she, with help from Lozen, began negotiating treaties of peace for their people. One such treaty stated that after a two-year, voluntary imprisonment, the Apaches would have their freedom. American leaders at the time dismissed this treaty, and despite having been a mediator and scout for the U.S. Calvary, her loyalty to both her people and the U.S. Army did not prevent her eventual arrest alongside Goyatła and Lozen in 1886.

The only photo that survives of Dahteste and Lozen was taken after they’d been captured, before they were separated. In the photograph, they are seated close together, along with Geronimo and other warriors in front of the trains that would soon carry them away in cattle cars to exile in Florida and Alabama. Having eluded capture for over a decade, Lozen would die as a prisoner of war at Mount Vernon in Mobile, Alabama, of tuberculosis at age 49, never to see her home or partner again.

Dahteste’s story continued after she was taken and held as a prisoner of war in St. Augustine, Florida. She remained there for eight years in an internment camp, managing to survive pneumonia and tuberculosis, and years later and still a prisoner, was shipped to Fort Sill, Oklahoma. There she lived for another nineteen years before being given permission to join the Mescalero Apache in New Mexico where she remarried, refused to again speak the English language, and lived out the rest of her life among her relatives. Eve Ball, who interviewed Dahteste before her death, wrote: “Dahteste to the end of her life mourned Lozen.”

Too many people remember Lozen and Dahteste without acknowledging the fact they were two-spirits, fiercely devoted to the land and their people, who were in love before being violently separated by colonization. I was told my entire life that there were no Apache women who were "that way," only to find out that there actually were — and that they the fiercest of them all. This critical part of Indigenous, women’s, and two-spirit history reminds us that loving who you love doesn’t make you any less of a warrior. It is imperative that we fight the erasure of our ancestor’s narratives, and work to reclaim our own.