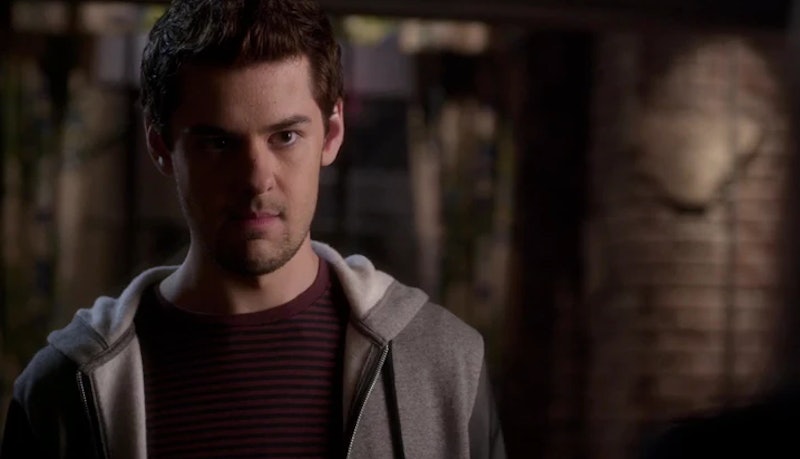 Freeform/screenshot
By Lindsay Denninger
May 10, 2017

With so few episodes left of Pretty Little Liars, there are plenty of plot points being resolved (I even forgot about some of them), but what kind of show would I. Marlene King be running if there weren’t new challenges to overcome? Like, oh, the fact that Lucas knew Charlotte on Pretty Little Liars? This new revelation makes Lucas look even more suspicious. Can we re-open that whole file about when he was on the A-team, please?

This new bomb came from none other than Pastor Ted (who I really just want to call Farmer Ted if I’m being real). Turns out that Pastor Ted is Charlotte’s father — he and Mary had a relationship when they were in college and rekindled things long enough to have a baby. Charlotte went to a camp for “troubled youths,” as it were, that Pastor Ted used to run, and he remembered young Charlotte hanging out with a kid named Lucas. Lucas Gottesman. The very same Lucas who is very wealthy and bankrolling Hanna’s company and somehow got back into Rosewood the very same time that the Liars came back to deal with Charlotte’s release and murder. How about them apples, huh? It might be a coincidence, or Lucas could have been in on the whole thing from the beginning.

It makes sense, if you think about it. He’s rich from a company he founded, but what about getting cash from the Carissimi Group? Lucas has deep pockets, and I don’t know that we really know where his money comes from. If A.D. is avenging Charlotte’s murder and Lucas and Charlotte were close as children, it totally makes sense that Lucas is A.D. He wants to make the people who hurt Charlotte pay, and acting like Hanna’s best friend is definitely one way to do it. Lucas knows more than he’s letting on on Pretty Little Liars, and I want to get to the bottom of this.