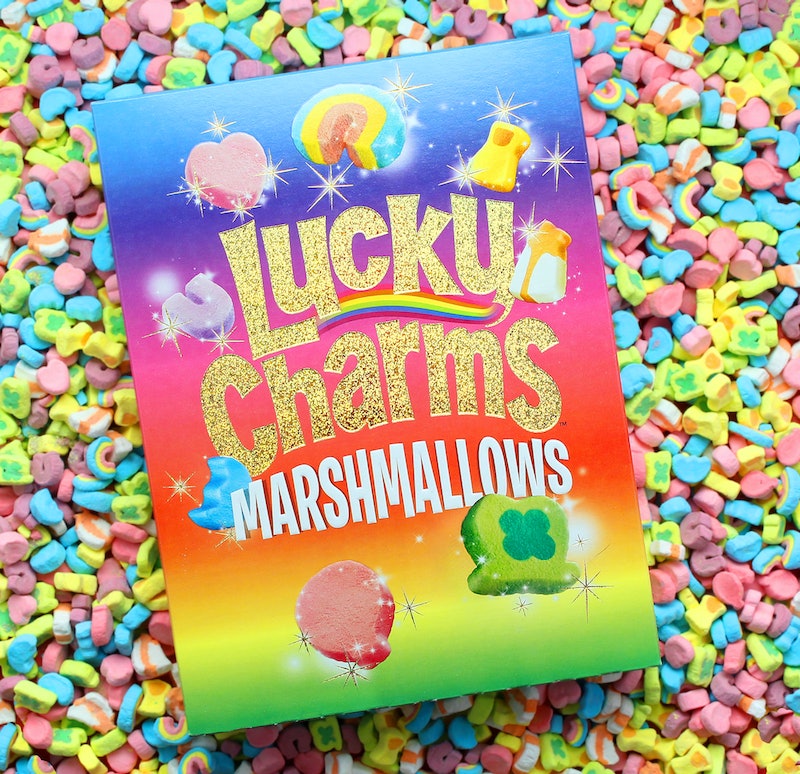 I've spent a lot of time in my life picking out the marshmallows from Lucky Charms. Not that the frosting covered oat shapes were poor tasting — they're delicious — but instead because I just preferred that sugar on sugar combination better. As a kid, an oat seemed too healthy to enjoy. It basically sounded like a vegetable. So, when I heard that Lucky Charms was bringing back their limited edition Marshmallow Only boxes, I couldn't help but wonder how my time might have been better spent throughout my childhood. It also made me wonder if the folks at General Mills are have tapped my brain and are listening to my hopes and dreams of a marshmallow-only life.

SO, how do you get this brilliant (and beautiful) box of magic and happiness? Lucky Charms is giving away 10,000 boxes of Marshmallow Only charms — to lucky winners, of course. In order to win, keep a lookout at your local grocery store for specially marked boxes. On the inside of the back panel, there will be a secret code. Go to www.luckycharms.com to type in your code and see if you're a winner. If you're one of the lucky 10,000 ticket holders, you'll be notified and you'll get a box of Marshmallow Only charms in the mail a few weeks later. Talk about a package to look forward to.

The sweepstakes will run all the way until December 2017, so while you should definitely rush to your supermarket to see if you're a winner, you'll have a lot of opportunities to try to be a winner again. But even if you don't win, let's be real, you're still basically winning. You've still go an excuse to bring Lucky Charms back into your cabinet without weird looks from your roommates. You're just trying to get your hands on a limited edition product, you're a collector, what can you say? Wishing you lots of a luck and sugar rushes in your efforts to win the green ticket. May the luckiest 10,000 cereal enthusiasts win!