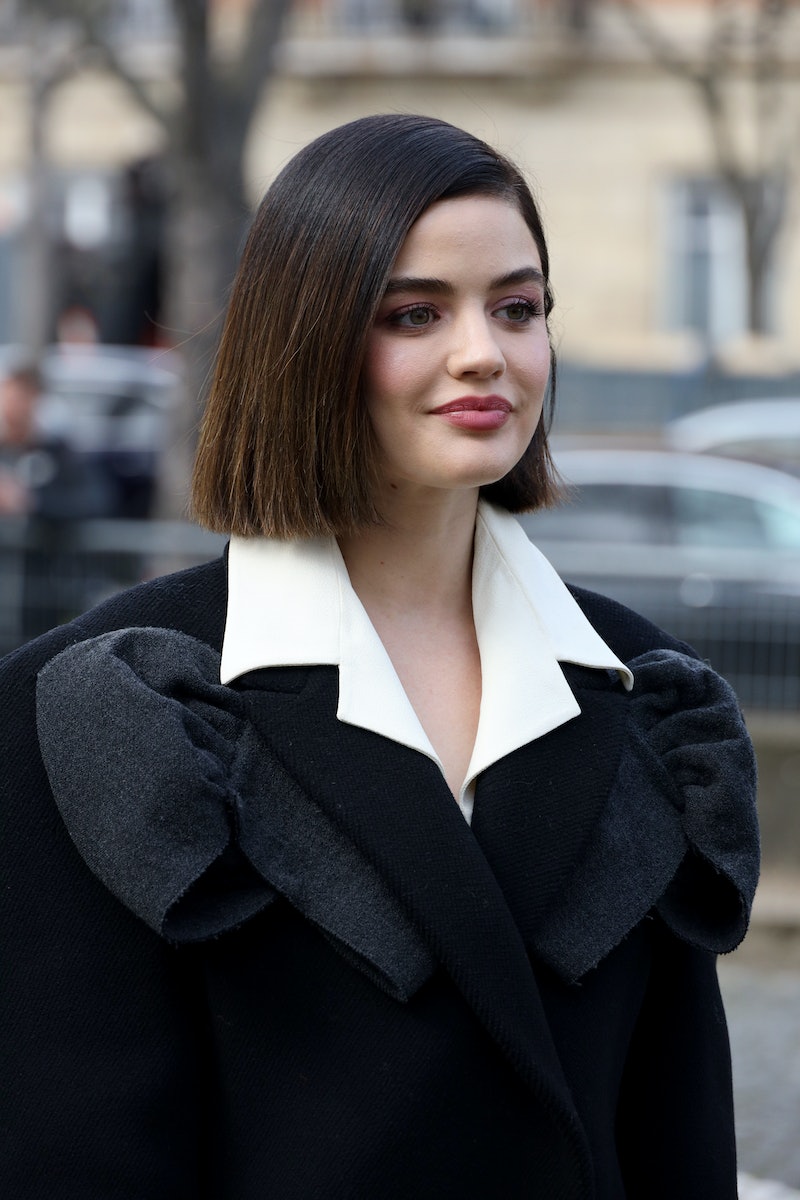 Before she starred on the legal drama Suits, the Meghan, Duchess of Sussex almost starred in a teen drama opposite a Pretty Little Liars alum. Lucy Hale recalled meeting Meghan Markle for an unaired TV pilot for ABC during the infancy of her career. In a virtual interview with Entertainment Tonight on May 14, Hale said she met Markle on the set of her very first TV pilot on a show entitled Secrets of a Small Town. While the two did not share any scenes together, the Katy Keene actor reflected on the table read with Markle prior to her duchess days.

"I didn't realize this because none of my scenes were with her, but it was an ABC pilot,” Hale told ET. “I had just moved to Los Angeles. I was like 16. It was called Secrets of a Small Town, and she was in that pilot.” She continued, “I remember at the table read I was like, 'Oh my god, she's so beautiful,' but I don't think I ever spoke to her." Hale then added that she’s never met Markle’s now-husband, Prince Harry, and joked, “Only in my dreams."

As for the unaired TV pilot, Secrets of a Small Town followed the mysterious murder of a teenage girl and the subsequent disappearance of the deceased teen’s sister. Per the drama’s IMDb page, it also starred some familiar names from our current pop culture landscape: Leighton Meester (yes, as in Blair Waldorf herself), Matthew Settle (also of Gossip Girl fame), Angie Harmon, Denise Richards, and Kaley Cuoco.

More delightfully so, the pilot of the 2006 series is actually available in its entirety (via six parts) on YouTube. While Markle doesn't appear to be in the clips, the videos do show a baby-faced Hale and Meester in the mystery drama that invokes The O.C., Pretty Little Liars, Gossip Girl, and maybe even a little Riverdale all at once.

Hale isn’t the only Pretty Little Liars alum with ties to the Duchess of Sussex. Her former PLL co-star Troian Bellisario attended Markle’s royal wedding to Prince Harry in May 2018 with her husband Patrick J. Adams, who starred opposite Markle in Suits for seven seasons as her love interest. Prior to the royal wedding, Adams tweeted about his former co-star’s engagement: “Playing Meghan’s television partner for the better part of a decade uniquely qualifies me to say this: Your Royal Highness, you are a lucky man and I know your long life together will be joyful, productive and hilarious," he wrote. "Meghan, so happy for you, friend. Much love.”

Secrets of a Small Town may not have made it to TV, but it's clear that both Hale and Markle are doing just fine.

More like this
Helena Bonham Carter Doesn't Think 'The Crown' “Should Carry On"
By Sam Ramsden
'Abbott Elementary' Fans Probably Missed This 'Parent Trap' Easter Egg
By Sam Ramsden
Parminder Nagra Definitely Relates To Her 'Maternal' Character
By Maxine Harrison
Adam Ali Hopes 'Waterloo Road' Will “Subvert” Queer Misconceptions
By Sam Ramsden
Get Even More From Bustle — Sign Up For The Newsletter
From hair trends to relationship advice, our daily newsletter has everything you need to sound like a person who’s on TikTok, even if you aren’t.