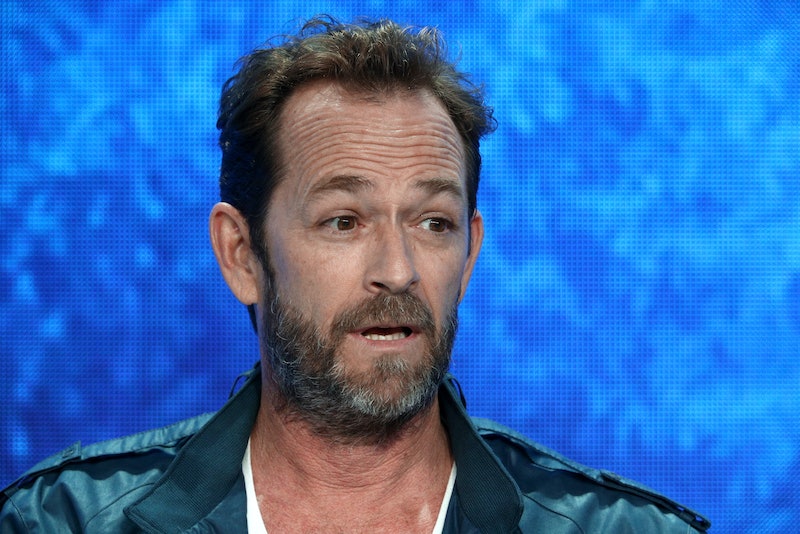 The world is still reeling from the loss of Beverly Hills, 90210 icon and Riverdale cast member Luke Perry. Aside from being beloved by his many fans, the actor's family is understandably still processing the sudden loss. Luke Perry's daughter, Sophie Perry, recently posted about missing him, along with a photo of the two sitting in a car with a dog. On Saturday, March 23, Sophie simply wrote, "miss him a little extra today."

The 52-year-old actor died only three weeks ago. On March 4, the news about Perry's death broke. This was after he suffered a stroke on Feb. 28. When he passed away, Perry's rep confirmed the news to Bustle and released the following statement:

"A lot has happened in this past week for me. Everything is happening so fast. I made it back from Malawi just in time to be here with my family, And in the past 24 hours I have received an overwhelming amount of love and support. I cannot individually respond to the hundreds of beautiful and heartfelt messages, but I see them, and appreciate you all for sending positivity to my family and I."

No one can blame Sophie for taking some time to herself, but it is nice that she has so many sweet messages to read if she's ever looking for another source of comfort.

She concluded her post with a very honest revelation:

Sophie is far from alone in this — her brother Jack Perry is coping with the loss as well. On March 6, Jack posted a heartfelt message of his own. His post started:

"He was a lot of things to a lot of people. To me, he was always Dad. He loved and supported me in everything, and inspired me to be the best that I could possibly be. I’ve learned so much from you, and my heart is broken thinking about everything you won’t be here for."

Jack concluded, "I’ll miss you every day that I walk this earth. I’ll do whatever I can to carry on your legacy and make you proud. I love you Dad."

On March 20, Jack did what he could to carry on that legacy when he posted a promotional photo from his father's film Once Upon A Time In Hollywood. Along with the picture, Jack wrote, "He was so proud of this, and so am I. Always a stud."

No one can truly understand the loss that Sophie and her brother Jack are experiencing, especially given how public it all is. At the very least, they have each other and the support of everyone who loves their father and his work.