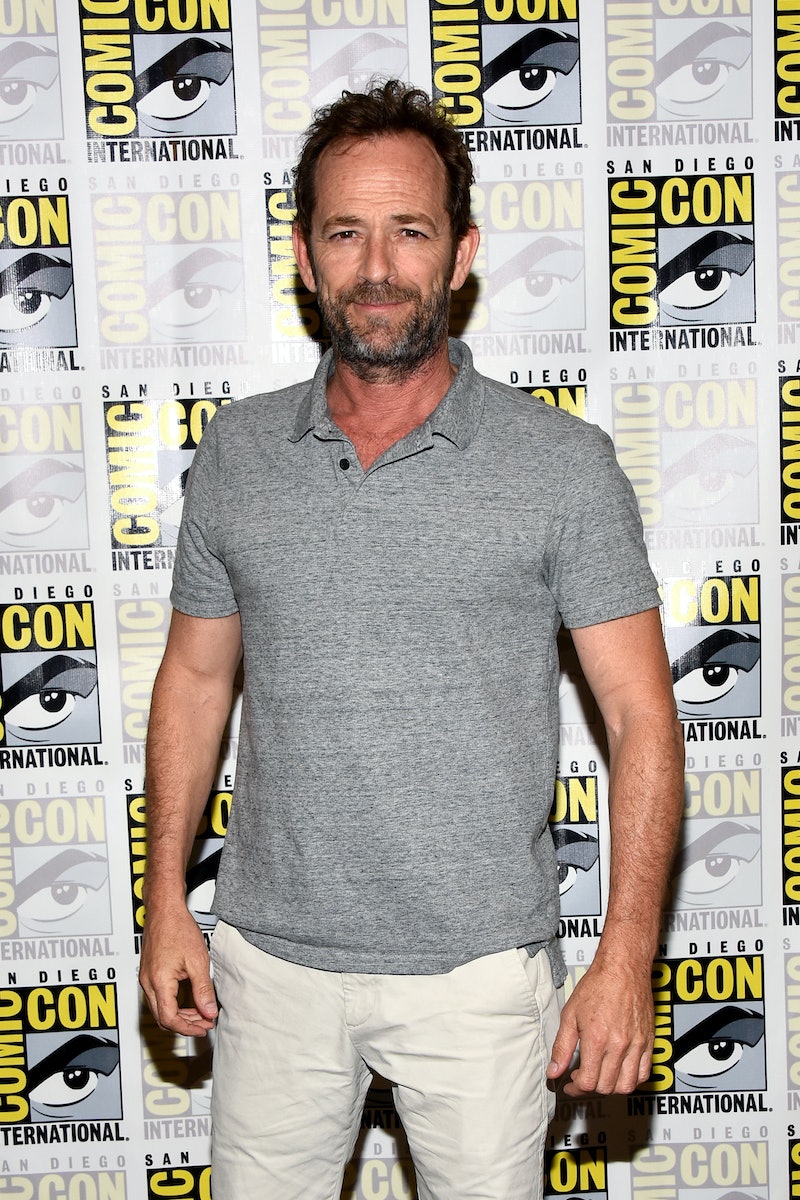 The passing of this former Riverdale star continues to understandably hit home for his children, Sophie and Jack Perry. Luke Perry's kids honored his final movie role recently on Instagram in two separate posts that are beyond emotional. Perry's final appearance he filmed before he died in March will be in Quentin Tarantino's Once Upon a Time in Hollywood, alongside Margot Robbie, Brad Pitt, and Leonardo DiCaprio. For Sophie and Jack, as sad as this moment is, they couldn't be prouder of their dad's hard work, especially since he was so excited to appear in the film.

Alongside a photo of Luke from the movie, Sophie wrote on Tuesday,

"It both breaks my heart and fills it with pride at the same time, to know that this film, this little point in history, is here. My dad has never been more excited in his life than he was to be part of this. He was like a kid faced with a banana split the size of his head, or a trip to Disneyland, or I don’t even know what."

The 19-year-old went onto say, "And while I wish so greatly that my dad had a million more roles, and projects, and moments of childlike excitement... I am so proud and thankful that this got to be his last." According to Sophie, Luke was "proud" of his work and she can't wait for fans to watch him in action.

As for Jack's Instagram for Luke, well, he literally climbed a Once Upon a Time in Hollywood billboard featuring his dad's face on July 22, the same day the movie had its premiere in Los Angeles. In the video below, you can watch as 22-year-old Jack is followed by a drone camera and climbs up to the very top of the billboard located on Sunset Boulevard in Hollywood. There are also two photos of Jack sitting on top of the billboard. He captioned his post,

"Big premiere tonight. He deserved this, and I’m very proud of it. A stud in life, and forever after. The best of the best. Love you forever. Thanks @dannydrone_ for capturing and making this for me."

It's still hard to believe Luke died at the age of 52 after suffering a massive stroke. To know that this is his final role, well, it's truly emotional. Even the Once Upon a Time in Hollywood cast feels that way. During the Los Angeles premiere, DiCaprio opened up about working with Luke. He told Extra, "I grew up with him on [Beverly Hills] 90210, looking up to him as literally the coolest dude on Earth and honestly when I was on set, I was starstruck." DiCaprio added, "We got to sit down and chat. He couldn’t have been a more amazing human being. It’s a real tragic loss."

The Tarantino movie comes out on July 26 and it will probably be hard for many to watch Luke in his final role. But, like both Jack and Sophie said, he deserved the part and everyone should be proud of him for once again showcasing his talent as an actor.