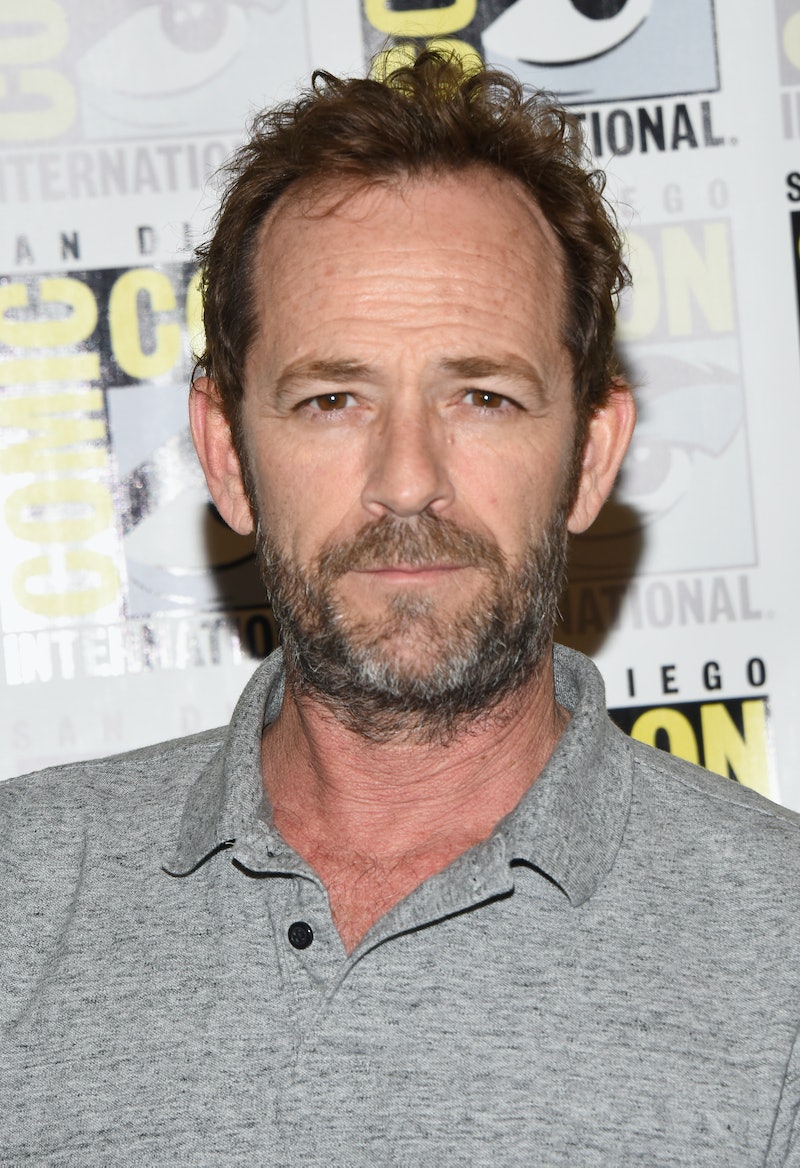 In light of the news that Luke Perry recently suffered a serious medical emergency, as TMZ reported on Thursday, Feb. 28, the actor has received an outpouring of love from fans, friends, and fellow cast members alike. Perry's Riverdale and Beverly Hills 902010 costars have posted messages of support for him on social media, showing just how much they're behind the actor in his time of need. On Thursday, Perry's rep released a statement to Bustle, confirming he was hospitalized: “Mr. Perry is currently under observation at the hospital.”

If you missed the initial news about the actor, TMZ reported that he had a "massive stroke" on Feb. 27 and was subsequently taken to the hospital. In regards to the news, a Los Angeles City Fire Department spokesperson spoke to Entertainment Tonight about the call they received about the emergency, but did not confirm whether or not it was Perry who they responded to. "We received a 911 call at 9:39 a.m. yesterday," they said, "The firefighters and paramedics from our department responded and one ambulance transported to an area hospital."

Perry's costars, from both Riverdale and Beverly Hills 90210 alike, have all responded to this news with nothing but support.

The Riverdale cast's resident photographer, Cole Sprouse, expressed his support for Perry by posting a black and white photo of the two of them along with the caption, "Love you bud."

Lili Reinhart also wrote some kind words in honor of Perry, as she wrote on Instagram, "Thinking of you, Luke. And praying for your safe recovery."

Marisol Nichols' thoughts are also with her costar, as she wrote, "Thinking of this amazing man. We love you Luke."

Casey Cott, aka Kevin Keller, shared a fun photo of himself and Perry and captioned it with, "Love you my brother."

Molly Ringwald, who's appeared on Riverdale as Mary Andrews, the ex-wife of Perry's Fred Andrews, took to Twitter to send her thoughts her costar's way, "Sending my love to Luke Perry."

Some of Perry's former costars on Beverly Hills 90210 (and upcoming costars, as they're set to star in a revival of the series), also expressed their support for him. Ian Ziering posted a throwback snap of the two men and wrote, "No words can express what my heart feels hearing today's shocking news. Let us all say a prayer for his speedy recovery."

Similarly, Shannen Doherty, who served as Perry's onscreen love interest on Beverly Hills 90210, also posted a throwback photo of him in her tribute to the actor, "My friend. Holding you tight and giving you my strength. You got this."

While Perry may have a long road to recovery ahead of him stemming from his recent hospitalization, it's apparent that he has a ton of support from those closest to him as he heads out on that road.

More like this
Alec & Hilaria Baldwin Gave Their 7th Child Another Version Of The Name Hillary
By Stephanie Topacio Long
Confusion Reigns After Kanye Changes His Instagram Profile Pic To Kris Jenner
By Jake Viswanath
The Try Guys Cheating Scandal, Explained
By Grace Wehniainen
Dixie D’Amelio & Noah Beck “Love Each Other” Despite Breakup Rumors
By Julia Emmanuele, Jordyn Tilchen and Grace Wehniainen
Get Even More From Bustle — Sign Up For The Newsletter