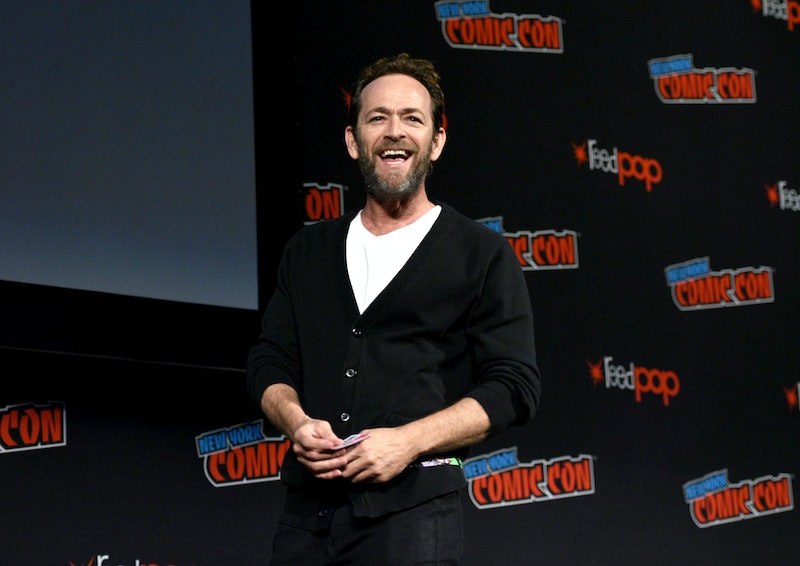 On Instagram on Wednesday, late Riverdale star Luke Perry was honored by his son, Jack, with a touching tribute showing just how much the actor meant to the 21-year-old. Not only did Jack share two photos, but he wrote a moving message explaining exactly how he feels after the death of his father. Based on his heartfelt post, it's clear Perry and Jack had a close bond.

Jack, who is a wrestler, shared one image of himself in the ring and a second adorable throwback of him as a little boy wearing the biggest smile with Perry next to him. As sad as the second image is, it's a beautiful way to remember Perry as a father. Jack began his caption,

"He was a lot of things to a lot of people. To me, he was always Dad. He loved supported me in everything, and inspired me to be the best that I could possibly be. I’ve learned so much from you, and my heart is broken thinking about everything you won’t be here for. I’ll miss you every day that I walk this earth."

His entire message is emotional, but the second to last line is truly heartbreaking. Jack concluded,

"I’ll do whatever I can to carry on your legacy and make you proud. I love you Dad."

There's no doubt Jack is already doing his dad proud and will continue to do just that as time moves forward.

Upon his dad's death (Perry died at the age of 52 on March 4 after suffering a stroke), Jack understandably pulled out of an upcoming wrestling show. Bar Wrestling tweeted on March 5, while referring to Jack by his wrestling name, "Unfortunately Jungle Boy will no longer be wrestling at our March 13th show. Our thoughts and prayers are with him and his family at this time."

Like Jack, his 18-year-old sister, Sophie, also remembered Perry with a touching Instagram on March 5. Next to a selfie with her dad, she explained that after returning from Africa, and just in time to say goodbye to Perry, she's truly thankful for all of the many well wishes she's received. She wants everyone to know that, even though she can't "individually respond to the hundreds of beautiful and heartfelt messages," everyone's words mean the world to her. She concluded,

At the time of Perry's death, his rep confirmed to Bustle that the actor had passed away and released a statement which read:

Based on their Instagrams, Jack and Sophie had a truly special connection with their father. Let's continue to send them love and support during this difficult time when they absolutely need it the most.