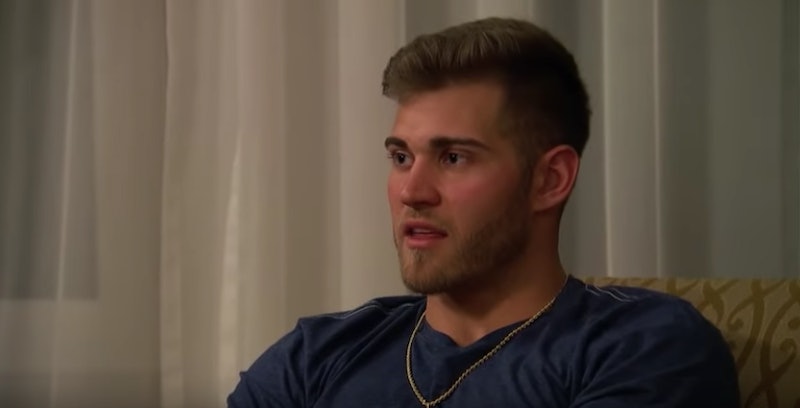 With hometown dates upon us, Hannah B.'s final four men — Tyler C., Luke P., Peter, and Jed — are about to introduce her to the people and places that made them who they are. She'll surely have plenty of questions for their friends and family, but it seems like in Monday night's episode of The Bachelorette, Luke P.'s parents have just as many questions for her — the biggest one being the same thing we've all been wondering, "Why is Luke still there?"

In a sneak peek of Luke P.'s hometown date published by Entertainment Weekly, no one shies away from talking about all the drama Luke's been in the middle of this season. Hannah tells his family that it was hard for them to have a real conversation beyond her confronting him about conflict with the other men, and Luke says he felt like he was walking on eggshells and always had to say and do the right thing.

A family member tells Luke that that's exactly what he should have avoided, and asks Hannah a pretty huge question. "We told him, Luke, be Luke. And what you just admitted to is you weren't Luke," he says. "So why is he here?" Hannah says honestly that she doesn't know, and everyone laughs it off, but there's obviously more where that came from.

The clip shows that Luke P.'s dad then takes him aside to have a chat. We'll have to wait until episode airs to see what he says, but it's clear he's taken aback by how things have unfolded. "To hear the stories and stuff that happened, I mean, that's not like my son," Luke's dad says. "I haven't totally worked it out in my mind to even visualize how this occurred."

Luke P.'s behavior has been frustrating to watch, but it's mildly reassuring that his family doesn't think it's representative of who he is, and that they don't have a problem confronting him about it. Regardless of what happens, this seems like it will be a definitive point in Luke and Hannah's relationship.

Oftentimes, hometown visits are when the Bachelor or Bachelorette really figures out who they can see a future with — if you want to have a future with someone, you have to know what you're getting into with their family. Hearing from them can make or break a relationship on the show, and now that we're closer than ever to the finale, some tough decisions will have to be made. We know things come to a head with Hannah and Luke soon, based on a trailer that heavily hints she sends him home over slut-shaming comments. Perhaps this is where things start to implode.

Despite many red flags, Hannah has kept Luke P. around, so it's clear that she sees something in him. But even she seems confused about what that is, or why she keeps giving him another chance. Hopefully, this hometown date will bring her some of the clarity she's been desperately looking for.