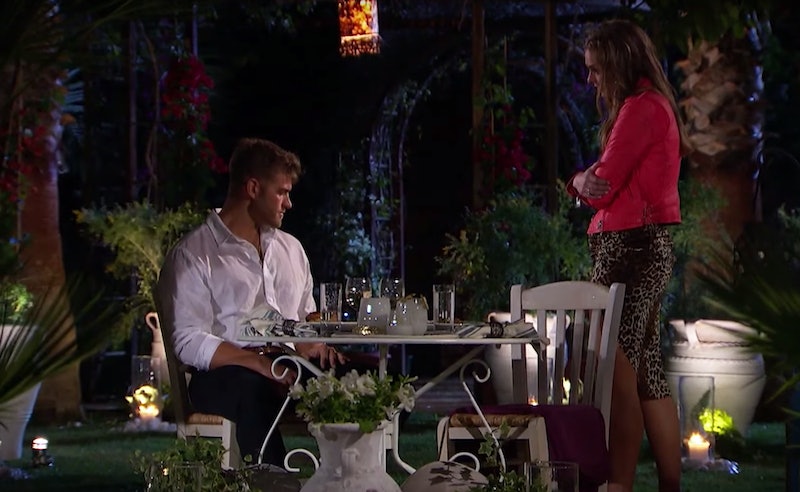 The villain has finally left the building. Luke P. was kicked off The Bachelorette at the end of the Fantasy Suite episode that aired July 15, and it was a rough one. After Luke told Hannah Brown he wouldn't want to be with her if she had sex with other men in the Fantasy Suite, sparking a relationship-ending argument, she finally got him to get in the limo to go home. And, while fans might have hoped never to hear from him again, Luke P.'s post-Bachelorette Instagram is keeping him in the public eye, and on Hannah's radar.

Following the airing of the episode, Luke shared a photo of Hannah and himself on Instagram along with a lengthy caption. He started off by stating that he was hurt that Hannah thought he had shamed her — essentially making her feelings all about himself. He claimed that it was not his intention to "judge or condemn Hannah." He wrote,

"I was simply making a decision for myself on what I expected in our relationship, our conversations and our beliefs led me to believe we were on the same page about sex. For me it was never about getting a rose, it was always about finding a wife who would choose me everyday just as I would choose her everyday."

Just to recap, Luke has mentioned multiple times that he was a player in college. In his church group meeting during Hometowns, he admitted to having a history of chasing sex, only to become celibate four years ago after having a revelation in the shower. Though he had mentioned this many, many times on the show, it seems his conversations with Hannah never covered how she felt about pre-marital sex. So, for him to assume that they "were on the same page about sex" seems pretty foolish.

Regardless, he continued, admitting that he had some mishaps on the show of his own making. "I didn’t totally behave as the man I want to be and I did not represent Christ the way I thought I was prepared to and that has broken me," he continued. He went on to explain that he learned a lot — though apparently not enough to not fight with Hannah on Twitter following the episode.

He closed his statement with a promise to live life for his faith and nothing else. "My desire is to put the Father first above all things and share the truth that he has given to us all," he wrote. "Always remember speak truth and rid yourself of all hate, let compassion drive your words." He ended the post with the hashtag "#faithfuloverfamous," and God only knows what that means.

Unfortunately, despite the Bible literally stating that only God and Jesus can judge, people like Luke P. will always exist. On the bright side, the entire confrontation allowed fans to see Hannah's fierce dedication to herself and what she deserves, which was definitely a treat.

It also gave us one of the most iconic Bachelor Nation moments in Hannah's "From obviously how you feel, me f*cking in a windmill... you probably want to leave." So, thanks for all the memories, Luke, but, just like Hannah, Bachelor Nation will not miss you.