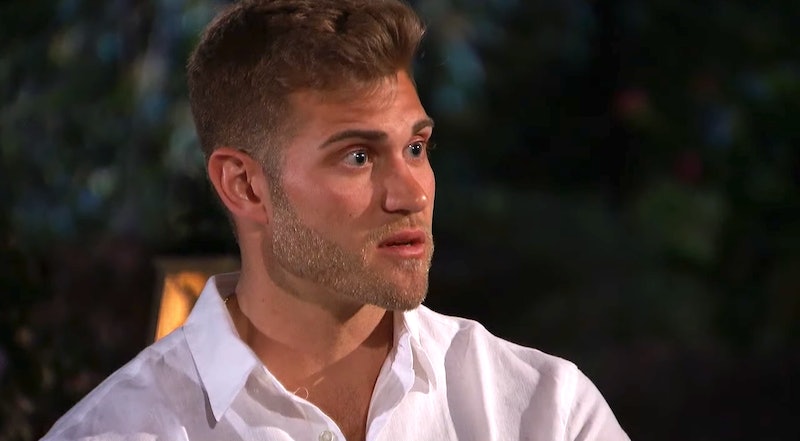 Despite all of the rest of the men (and viewers at home) pleading with Hannah to get rid of Luke P. on The Bachelorette, she's continuously kept him around — that is, until Monday night. As previews have shown, Luke P. sex-shamed Hannah during their Bachelorette Fantasy Suite date, and the resulting argument got him sent home. But since The Bachelorette has been teasing what he is going to say for weeks, Luke P. already addressed his behavior toward Hannah on social media before it aired, and his comments indicate he still has a lot to learn.

Luke has been very vocal about his Christianity from the outset of The Bachelorette. However, it wasn't until after Hannah bungee jumped partially naked with Garrett that it became clear his religion has led to him having some controlling views about sex. Hannah wasn't having it then, and it once again became an issue during the Fantasy Suite date, since he told her, "Let's say you have had sex with one or multiple of these guys, I'd completely remove myself from this relationship." Hannah then swiftly sent Luke home after powerfully defending her right to do whatever she damn well pleases with her body.

Luke has said he was sexually promiscuous in the past, but after he embraced Jesus, he changed his ways. Now, he believes "the marriage bed should be kept pure," as he tells Hannah during the Fantasy Suite date. Because even though he signed up for a show like The Bachelorette, on which the entire premise is one woman dating multiple men to find a potential husband, Luke doesn't approve of Hannah being sexual with him — or anyone else — until marriage.

With her comment, "I have had sex and honestly, Jesus still loves me," Hannah took down Luke P.'s narrow view that to be religious, a woman must be "pure." But it doesn't seem that Luke has really learned anything from his experience with Hannah or the backlash he's already facing from viewers. After Week 3, Luke decided to "address the elephant in the room" on Instagram, but didn't actually apologize for his actions. He wrote:

"Regardless of what is aired AND IF @alabamahannah and I are together or not my behavior in all situations has been and will continue to be exposed. I have learned a lot and I am continuing to learn about my flaws as a man. I'm the first to admit I am far from perfect. This journey has giving [sic] me a great opportunity to grow and mature as a man, for that I am grateful. For those of you who are on this journey with me I am grateful for your support and hope you get to learn and grow from my mistakes with me!"

Since Luke has displayed toxic behavior multiple times, it's not clear if the "flaws as a man" he was referencing were how he tried to control Hannah's sexuality or something else entirely. But he got more specific on the subject in his "BACH" Instagram Story.

"I'm not a virgin and never claimed to be . . but I have decided to wait until marriage with my future wife," Luke wrote, addressing the promo that showed their impending Fantasy Suite date. Again, he stated that he isn't perfect and added, "I do want to get this right for my own personal growth. I'm excited about this opportunity to mature, not many people get too [sic] see their flaws on national television . . #blessingandacurse"

After the episode aired, he also posted a lengthy message to Instagram. However, he still didn't outright apologize, and kept the focus on his feelings rather than Hannah's, writing:

"It hurt my heart that @alabamahannah felt I was shaming her.In our conversation my heart was never to judge or condemn Hannah. I was simply making a decision for myself on what I expected in our relationship, our conversations and our beliefs led me to believe we were on the same page about sex. For me it was never about getting a rose, it was always about finding a wife who would choose me everyday just as I would choose her everyday. As for my time on the show I made mistakes and no I’m not perfect (crazy right) I didn't totally behave as the man I want to be and I did not represent Christ the way I thought I was prepared to and that has broken me. This journey has taught me so much and for that I am grateful but the greatest gift I have received is a compassion for those who love the world and it's [sic] ways. My desire is to put the Father first above all things and share the truth that he has given to us all. Thank you everyone for the prayers always remember speak truth and rid yourself of all hate, let compassion drive your words. Stay tuned."

Deciding to refrain from sex until he's married is 100% Luke's choice to make, but that doesn't mean he can force Hannah to do the same, nor does he have any right to dictate what she does with the other men. It might make him feel uncomfortable or jealous, but Luke can't police her body or her actions — nor should he shame her for them.

Clearly, Luke thinks he is demonstrating "growth" by saying he's trying to learn from the experience and admitting that he's not perfect. But he's yet to directly address what, exactly, it is that he did wrong. Perhaps he'll have some new insights to share on The Men Tell All. But until then, all this sounds like is empty platitudes.