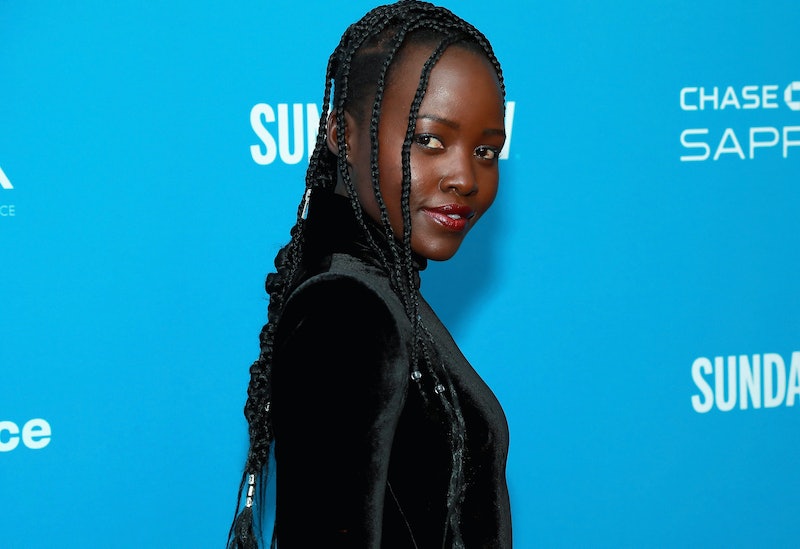 Taylor Swift may be beloved by millions of fans around the world, but there's one celebrity in particular who may very well be her biggest supporter. While speaking to the audience at the 2019 Sundance Film Festival in Park City, Utah, earlier this week, Lupita Nyong’o revealed that Swift's music helped her get through a difficult time in her life. In fact, one of Swift's songs in particular, the popular single "Shake It Off," proved to be very helpful in getting her out of a "funk."

Nyong’o was at the festival promoting her new film, Little Monsters, where she plays a school teacher who is tasked with the important job of protecting her young students from a zombie invasion. One scene in the movie involves her character, Miss Caroline, performing "Shake It Off" with a ukulele as a way to keep the children calm, which meant a great deal for Nyong’o. "I was going through a hard time professionally, and I was just in a funk," she explained, according to E! News. "I was working abroad, and my best friend came to cheer me up. He played 'Shake It Off' on his phone, and we just had a dance party in my bedroom."

In fact, the song resonated so strongly with Nyong’o that when she heard the filmmakers was having a hard time getting the rights to it, she wrote a message to Swift herself, hoping it would help convince her to agree. "I wrote Taylor Swift myself and asked her, and told her that story," the 35-year-old actor revealed. "And she said yes!"

But just in case you're still having some doubts as to whether or not Nyong'o really loves this song as much as it seems, during a separate interview with USA Today she shared that the song was a big part of why she agreed to do the film in the first place. “That’s one of the reasons why my interest was piqued in this movie when I read the script,” Nyong’o told the outlet. "Because I was like, ‘Someone else who loves ‘Shake It Off’ just as much as I do!'”

She might have been excited to see the song in the script, but Nyong'o did admit that she was pretty nervous to sing on camera for the movie. “I do enjoy singing but it’s not often that I do it in the movies,” she said during the same interview. “It was a weird feeling. But I learned to play the ukulele as well, so it was all really uncharted territory."

So, not only was Nyong'o personally invested in getting the rights to the song, she also learned an entire new instrument to perform it. Compliments don't really get much better than that, so it's no wonder Swift was so happy to accommodate Nyong’o's request. Not that Nyong’o doesn't garner her own fair amount of praise herself. Just last week Black Panther nabbed seven nominations for the 2019 Oscars, making it the first-ever superhero movie to be nominated for Best Picture. Additionally, the cast also won a SAG Award for Outstanding Performance by a Cast in a Motion Picture.

Needless to say, Nyong’o is doing well for herself, but it's always nice to see artists supporting other artists. And if this respectful relationship between her and Swift turns into a close friendship, which leads to the two of them starring in a comedy film together, then so be it.

More like this
The 'Love, Lizzo' Harry Styles Scene Is Just 1 Moment That Made Fans Feel Seen
By Brad Witter
'Wakanda Forever' Is Already Opening Doors For Mabel Cadena
By Grace Wehniainen
Taylor Swift Reacts To The Ticketmaster Controversy After Twitter Outrage
By Jake Viswanath
Olivia Wilde & Harry Styles Are Reportedly "Taking A Break" After Almost 2 Years
By Jake Viswanath and Radhika Menon
Get Even More From Bustle — Sign Up For The Newsletter