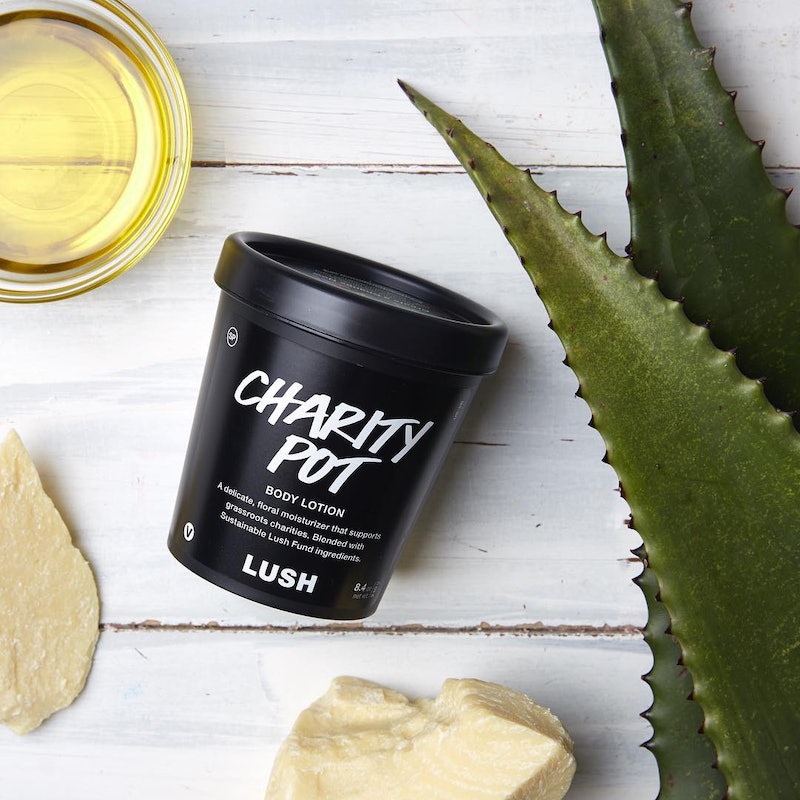 Lush's charitable giving is core to their brand. From supporting organizations such as the National Coalition to End the Death Penalty through their 31 States bath bomb to helping fight internet censorship with the Error 404 bath bomb, they are committed to making the world better. Lush's Giving Tuesday deal is no exception. The brand's iconic Charity Pot is getting double the love for the philanthropic day after customers have shopped until their hearts are content thanks to Black Friday and Cyber Monday. The Lush Giving Tuesday event is honestly so perfectly for the brand.

For Giving Tuesday, Lush is taking their iconic Charity Pot lotion and doubling the contributions on purchases. If you've shopped Lush before, you know that the Charity Pot lotion is there year-round product that gives back. When customers purchase Charity Pot, 100 percent of the proceeds (minus taxes) go toward a charity of Lush's choice. For Giving Tuesday, Lush has chosen three charities that will receive double the typical donation amount. Basically, if you buy one Charity Pot, you're help Lush give to charity as if you've bought two.

For the day, Lush has chosen three specific charities that will benefit from the proceeds, and if you want to help, now is the time to shop Charity Pot.

First is the International Rescue Committee which helps respond to humanitarian crises by assisting people with rebuilding their lives. Next, Lush will be giving to the National Coalition for the Homeless which is a nationwide network of organizations which help to assist those who have experience homelessness and protect their rights. Finally, Community Food Centres Canada will receive part of the proceeds to help further their mission of assisting low-income communities through food.

The traditional Charity Pot lotion isn't the only item that qualifies for the Giving Tuesday deal, though. Lush has included other items that include the lotion as well. The brand has multiple gift sets for the holiday season that all feature some form of Charity Pot. Whether you're looking to give someone a smorgasbord of Lush goods with their WOW gift set or eyeing something for less like their You're A Star gift set, whatever portion of the set is comprised of Charity Pot will be extracted, doubled, and then donated to the Lush FunD and then split between the three organizations chose for Giving Tuesday.

Since the Charity Pot program began, Lush has donated $33 million to various charities that support their values such as fighting animal cruelty, environmental justice, and human rights. Just in 2018, the brand has raised over $11.2 million and given the money to 588 charities through the country. Now, you can help pitch in a little more than usual.

If you want to join Lush for Giving Tuesday, head over to their website or your local store now and pick up Charity Pot. Whether it's a single product or part of a gift set, your cost will be converted into double the typical contribution, and maybe, just maybe, you can justify doing just a bit more shopping post-Cyber Monday.