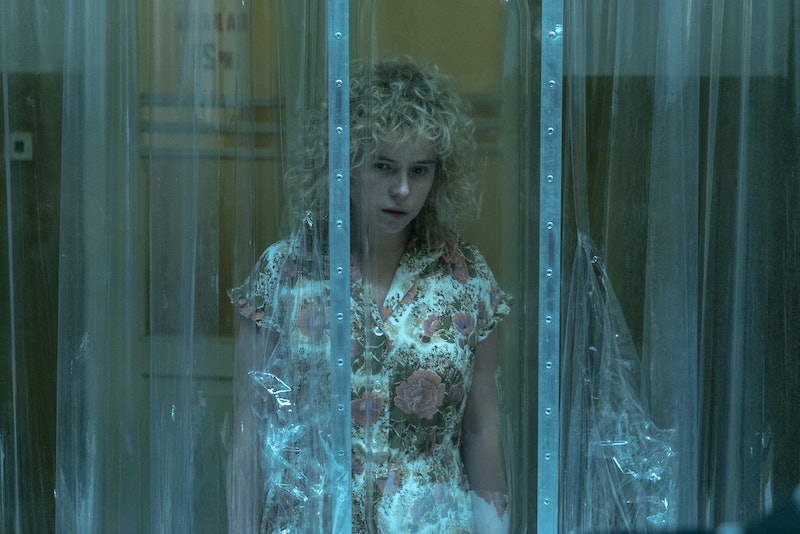 HBO's new miniseries, Chernobyl, recreates the 1986 Chernobyl disaster in grim detail, dramatizing the real stories of people directly affected by the tragedy. One of the characters it follows is Lyudmilla Ignatenko, a real person played in the show by Jessie Buckley. After her husband, a firefighter named Vasily, goes into the power plant without any sort of radioactive protection, Ignatenko is left to watch him die.

Ignatenko shared her experience with author Svetlana Alexievich, for her Nobel prize-winning 2015 book Voices from Chernobyl: The Oral History of a Nuclear Disaster. In an excerpt from the book published by The Guardian, Ignatenko said that visiting her husband while he was being treated for radiation poisoning was like meeting a brand new person every day. "The burns started to come to the surface. In his mouth, on his tongue, his cheeks - at first there were little lesions, and then they grew. It came off in layers - as white film ... the colour of his face ... his body ... blue, red , grey-brown. And it's all so very mine!"

These visuals are hard to stomach, whether reading them or seeing them play out onscreen, but they do provide a vivid depiction of what Ignatenko went through, and the havoc wreaked by the explosion — which some sources estimate as having a death toll as high as 60,000. "The only thing that saved me was [that] it happened so fast," Ignatenko continued, per The Guardian. "There wasn't any time to think, there wasn't any time to cry. It was a hospital for people with serious radiation poisoning. Fourteen days. In 14 days a person dies."

As Buckley told The Independent earlier this month, she never had the opportunity to meet Ignatenko, but in order to prepare to play her, she watched documentaries about the Chernobyl disaster that Ignatenko was featured in. "There was always something about her neck, where it was like she was being choked by grief," she told the outlet. "I don't know what I would have said to her. If anything, I would have just given her a hug, and said, 'I hope I've told your story as honestly as I can.' I mean, she survived, you know? The survival instinct in humans is amazing."

Buckley also said that she was scared to take on the role, but ultimately, that fear is what pushed her to do it. "When you're playing a real character who's lived this horrific truth, that is terrifying," she continued. "[But] people are capable of so much, and our fear is the thing that stops us. Sometimes, you need to step into environments that are gonna just destroy you from the side, and you've got no other option but to rebuild yourself, and to find a way to come out on top."

The horror that Ignatenko was forced to watch her husband endure is difficult to watch, even if Chernobyl is merely a dramatization of true events. However difficult it is, though, Chernobyl is an important series that conveys the real pain that people like Ignatenko went through.

More like this
Lib & Will’s Romance In 'The Wonder' Is Very Different From The Book
By Sam Ramsden
'Black Bird' Subject James Keene’s Book Helped With His “Redemption”
By Brad Witter
Yes, The Same Valet Worked For Both The Duke Of Windsor & Mohamed Al-Fayed
By Karen Fratti
Netflix Bumped Up The 'You' Season 4 Premiere Date — Here's What To Expect
By Bustle Editors
Get Even More From Bustle — Sign Up For The Newsletter