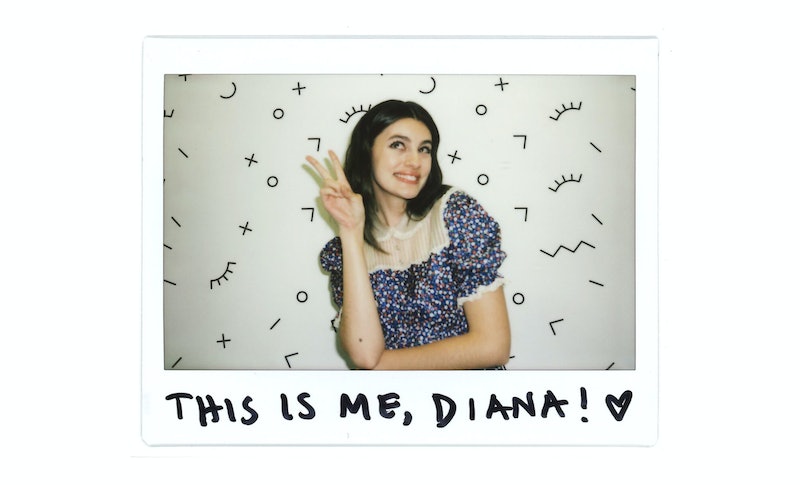 When celebrities hang out with Bustle writers, we want to give them the chance to leave their mark. Literally. So we hand them a pen, a piece of paper, a few questions, and ask them to get creative. The rest is up to them. This time, actor Diana Silvers from Ma and Booksmart is leaving her mark in the Bustle Booth.

When Diana Silvers last drove up to her former home, the road weaved between blackened hills, the landscape painted by ash. As a result of a California fire that destroyed her father’s house in 2018, all of her journals, photo negatives, and mementos of childhood were engulfed in flames. Still, the actor and artist returned months later, camera in hand, ready to reflect on what she lost.

“We put so much of our personal identity in the things and the clothes and the artwork and the physical objects,” Silvers says, wiping away a stray tear as she sits across from me in the Bustle green room. “And then when it's all gone, you're like, who the f*ck am I? … Who am I without the things that I say are me?”

Silvers documented the tragedy through poetry and photography that she then published online. In a scribbled poem, alongside photos of charred cars and collapsed roofs, she expressed optimism. She wrote, “I have hope. Hope that something beautiful will rise out of the ashes.”

She was right to be hopeful; within days of losing her home, Silvers got a callback for her first major role (and second role in a movie ever) — playing Maggie, an eager-to-fit-in teen who's recently relocated to her mom's hometown, opposite Octavia Spencer in the thriller, Ma, in theaters now.

Silvers read with Spencer during the audition process, which not only led to her casting but to a new mentorship. Although the Oscar winner's character wreaks havoc on the life of Maggie and her classmates, the real-life Spencer took the younger performers under her wing. Silvers says the cast has a group chat where Spencer operates as the cast mom, doling out plenty of career advice.

“She kept saying, 'They're gonna try to make you sexy and you gotta say no, because that's not what you want,'” Silvers remembers.

The 21-year-old is determined not to become the next “hot girl in Hollywood” — a conviction she brought to her next role as the cool and aloof Hope in Booksmart, which required her to shoot her first sex scene. (Booksmart was filmed after Ma, but beat the horror film to theaters by just one week.) The scene, which she shares with Kaitlyn Dever, isn’t what you’d expect from a teen comedy; it isn’t raunchy or hyper-sexualized — it isn’t even particularly funny. Instead, it’s imbued with a fumbling, endearing awkwardness. Silvers credits this largely to first-time director Olivia Wilde’s talent and female perspective.

“The idea of virginity and hooking up is so sexualized and glorified through the male gaze; whereas with the female gaze, it's more about the intimacy and the connection and like, trying to get your shoes off ... All these little things that we remember from our first hookups, you know?” she says.

This spring, with her two new movies, you’ll get a front row seat to Silvers’s rise in the industry. While it’s a solid bet you’ll be seeing more of Silvers, she momentarily panics when I ask her about her next step. It's not been decided... yet.

But you shouldn’t be too worried. After all, this is the woman who chose to return to a place of lost memories and destruction with a camera in hand — the woman who paused only for a second, whose hesitation was immediately eclipsed by a determination to make art.

“Let's make something beautiful out of this literal ash and destruction,” she recalls thinking, right before she picked up her camera.