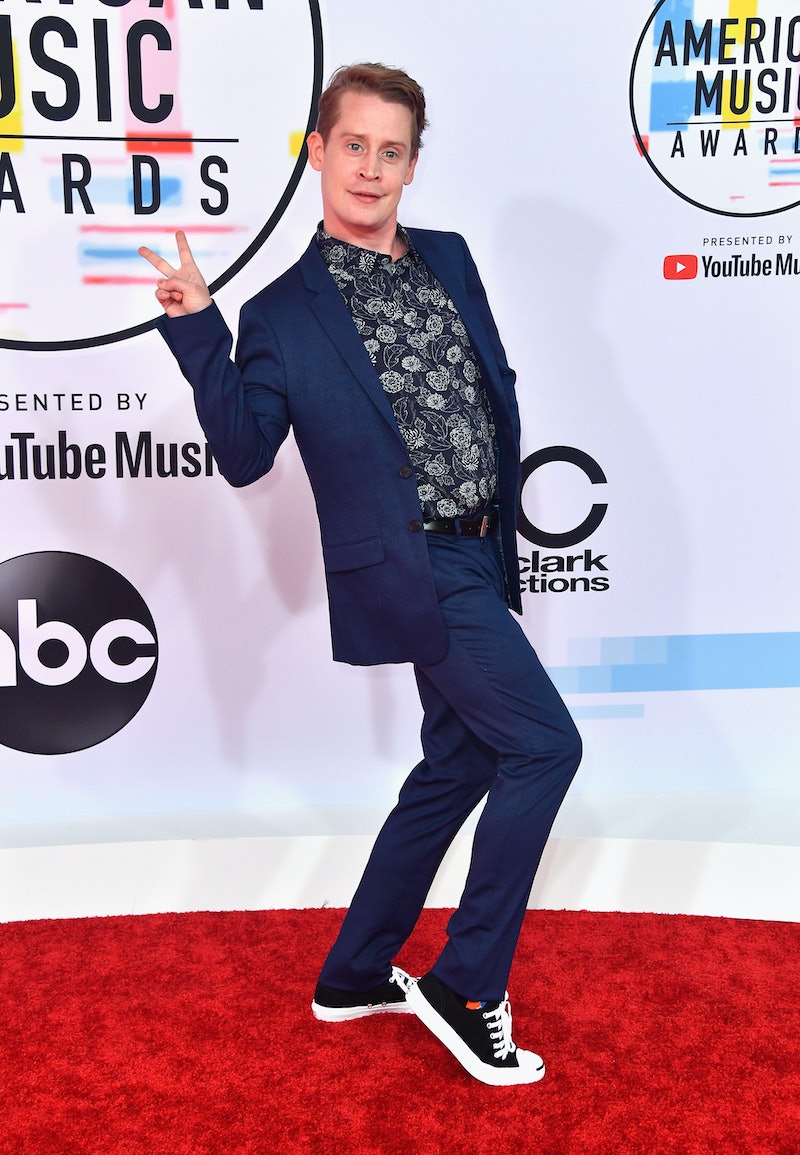 Lizzo asked "Why men great 'til they gotta be great?," and she may have just given us the answer: not all men are Macaulay Culkin. The Home Alone star proved his greatness during a Lizzo show in Los Angeles on Oct. 21, where Culkin danced with Lizzo onstage. The impromptu dance-off came at the singer's request and the actor was happy to oblige, which resulted in the ultimate team up absolutely nobody could see coming.

Culkin posted video footage of his brief dance on both his Instagram and Twitter accounts, which featured him showing off some of his moves with Lizzo's dancers. His skills may have left a lot to be desired — kudos to him for trying his best, though, with that sprinkler move! — but his enthusiasm quickly made up for any lack of rhythm. "When @lizzobeeating asks you to do a silly dance... You get up there and do a silly dance," he captioned the Instagram post.

His inclusion in the performance proved to be extremely fitting as well as downright amusing. The dance came during Lizzo's "Gigolo Game" interlude before "Like a Girl," on which she sings, "I don't really need you, I'm Macaulay Culkin home alone." And, before he left the stage, Lizzo made a point of recreating Culkin's iconic scream from his days as Kevin McCallister in Home Alone.

A Lizzo-Culkin team-up might seem odd, but the two have actually know each other for years. In fact, Culkin appeared in Lizzo's 2014 music video "Faded." He's also recently been campaigning to get the singer onto his Bunny Ears Podcast on Twitter. So when he tweeted that he went to see his "friend Lizzo" in concert, he wasn't lying.

Meanwhile, this isn't the only notable collaboration that Lizzo has in the works, though. Entertainment Tonight recently spoke with Justin Timberlake about the new music he's currently creating with the rapper. "I'm not going to tell you too much about what we did together in the studio," he teased, "If she wants to tell you, she can, but it's flames. It is so good. I am so excited about it."

Clearly, Lizzo has no short supply of celebrity fans out there, so one can only imagine who could end up popping up on stage alongside her next. Either way, the church of Lizzo is stronger than ever.

More like this
The Jonas Brothers' New Album Has A Very Meta Name
By Alyssa Lapid
Brad Pitt Wants To Share The Spotlight With This Celeb In Shania Twain’s “That Don't Impress Me Much”
By Alyssa Lapid
Cruz Beckham Teased New Music With An Adorable Nod To Mom Victoria Beckham
By Stephanie Topacio Long
The Spice Girls Are Set To Reunite At King Charles III’s Coronation
By Sam Ramsden
Get Even More From Bustle — Sign Up For The Newsletter
From hair trends to relationship advice, our daily newsletter has everything you need to sound like a person who’s on TikTok, even if you aren’t.