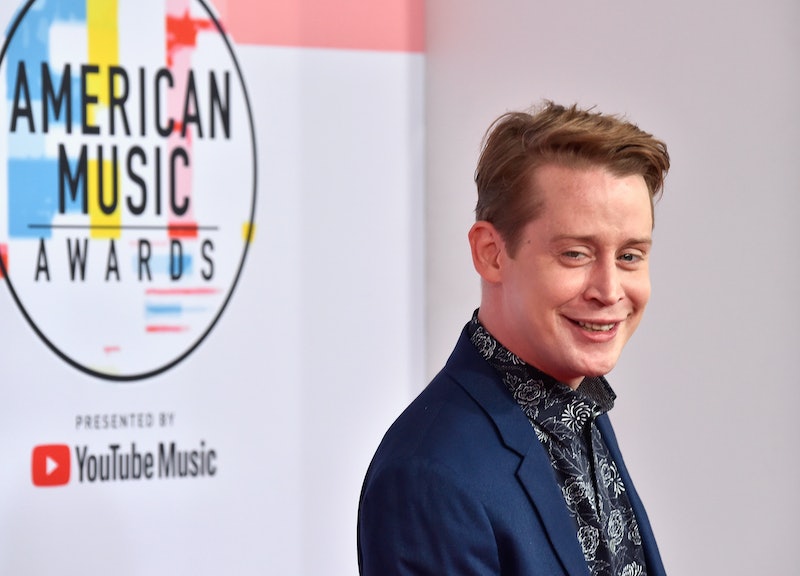 Most people choose to stick with the names their parents give them, even if the names aren't what they would have chosen for themselves. But if you really want to switch things up, you can make a legal change — just ask the star of Home Alone. Macaulay Culkin is changing his middle name, and his new moniker will probably make fans scratch their heads.

It turns out that the middle name Macaulay Culkin is adopting is... Macaulay Culkin. Yes, you read that right — the actor's new legal name will be Macaulay Macaulay Culkin Culkin. And the Jim Gaffigan Show actor can thank his fans for the new name, which is one heck of a mouthful.

In a post on his website, BunnyEars.com, last month, Culkin asked fans to vote on what his new middle name should be. He didn't share what his given middle name is, noting only that it's "something dumb" in his post.

"Larry? Orange? Honestly, I can't even remember it," Culkin wrote of his former middle name. "So I asked you all to send in some better options so I can go down to the court house and explain to a judge why I need to change my middle name to something cool."

After fans sent in their suggestions for a new middle name, Culkin chose his top five options and ran a poll on the site. The winning middle name, with 60,990 votes, was "Macaulay Culkin."

The other four names that Culkin chose to let fans vote on included "Shark Week," "Kieran," "The McRib Is Back," and "Publicity Stunt." After the winning option, the second most-voted name was "The McRib Is Back," with 14,558 votes. Culkin having his middle name be his actual name doesn't sound so bad, if that's the other option. I mean, what if the McRib doesn't stay back? That's not something you want to have to explain to people for the rest of your life.

Macaulay Macaulay Culkin Culkin is quite a name, but it looks like the actor doesn't take himself too seriously. (And really, how often do you tell people your middle name, anyway?) He's recently taken a liking to poking fun at himself, parodying Home Alone in a new ad for Google Assistant.

Plus, Culkin also appeared as a parody of himself on The Jim Gaffigan Show. In the sitcom, Culkin sported a ponytail and worked at a coffee shop, stepping into a number of millennial stereotypes to hilarious effect. Culkin was also a member of the Velvet Underground parody cover band, The Pizza Underground, but he told Marc Maron on his "WTF" podcast earlier this year that The Pizza Underground had disbanded.

Changing your middle name is a big move, but it looks like Culkin is more than ready to take the plunge. After all, he's no stranger to poking a bit of fun at himself, as his recent projects have shown. And if it makes fans happy, then Culkin's announcement is an unexpected holiday gift for the 60,990 people who helped choose the new name.