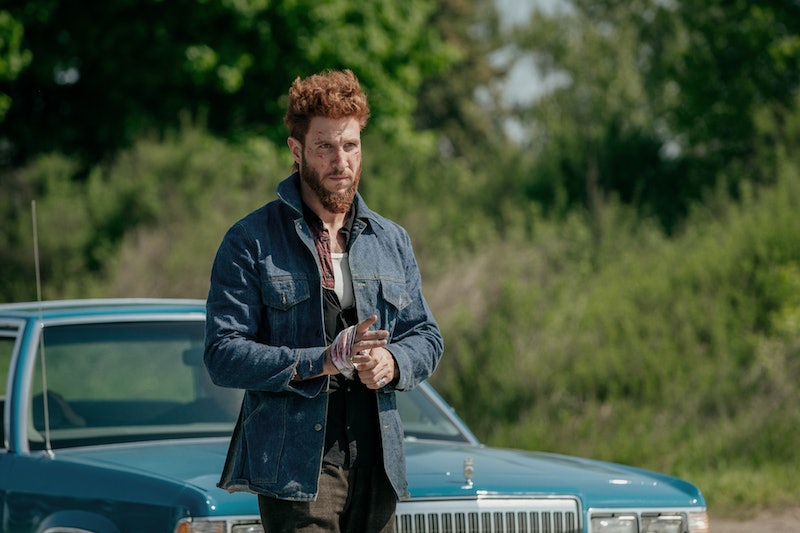 Late in the debut season of American Gods, Mad Sweeney gets an opportunity to run away. He's been driving across the country with Laura Moon, who has been re-animated, to fully bring her back to life so he can get back the lucky coin that enabled her to walk around in the first place. Then, the car flips over. The coin falls out. He can take it and leave, and there's no reason to believe he won't, especially since he killed Laura in the first place. But he doesn't. Mad Sweeney gives the coin back to her, so she can keep going. Actor Pablo Schreiber tells Bustle that Sweeney's connection to Laura stems from "a combination of familiarity, nostalgia and guilt." And that connection will bring them back together, despite their messy history.

Mad Sweeney's introduction to the series shows a loud, boisterous man who seems to be interested only in taking care of himself. Over the course of the first season, Sweeney seems to have a change of heart, but Schreiber credits this shift to "story and perspective. I don’t think anything particular changes with his behavior, he’s the same guy and the beginning of the season as he is at the end." Sweeney's always been a complicated, layered figure – and it likely affects how you remember the character's earliest scenes.

Though he literally comes out swinging, Sweeney's many dimensions eventually make him the beating heart of the series. As Schreiber describes it, "I think in general people feel sorry for him because he can’t catch a break. He has terrible luck and he keeps getting beat up by everybody ... there’s some feelings of wanting to give the guy a hug."

Mad Sweeney may be unexpectedly huggable, but he seems fairly content to walk the Earth alone, killing and maiming for Mr. Wednesday as duty calls. However, it's this cold and distant approach towards life that finds him company and the perfect road trip companion in Laura "Dead Wife" Moon.

"There's an element of magnetic attraction [to Laura and Sweeney]," Schreiber says. "We see that he had a lifelong connection with [Essie MacGowan] who either looks exactly like Laura or reminds him of Laura ... after feeling that resemblance or connection he was then tasked with killing her." But it's not just a physical resemblance that complicates this hitman/target relationship. "These two people are clearly magnets to each other, both connected by their intense feelings of guilt," the actor continues.

Mad Sweeney's story in American Gods has already expanded far beyond where his story in the original novel, with his entire relationship with Laura being created just for the show. The series has been renewed for Season 2, so Schreiber is eager to discover where the character goes next, or if he'll meet a pre-determined fate.

"I know what his last scene in the book is. I don’t know if [the writers will] end up sticking to that or if they’ll try to change it," he says. Despite what the book has dictated as the ending of Mad Sweeney's story, Schreiber and the writers have been using the negative space in the novel to tell their own unique tale. "The beauty of the character in the book is that you only see him twice in the book," Schreiber says. "The rest of what happens in between those two scenes is up for us to create."

Schreiber doesn't know everything about Sweeney's arc, but he's confident about one specific aspect of the show's sophomore season. "I’m entirely sure we’ll see more of [Mad Sweeney and Laura] together," he promises. Despite Laura and Shadow's reuniting, Schreiber believes that the relationship between Laura and Sweeney "was so clearly a pairing of great promise and wonderful chemistry that it would be foolish not to explore it further," he explains. "Whether it’s explored immediately at the beginning of Season 2 or whether it takes a while for them to come back, I do know for sure that we will see more of them together ... It clearly worked."

American Gods is scheduled to return in mid-2018, and nothing, not even the original novel, will be able to tell fans where Mad Sweeney may take them next.