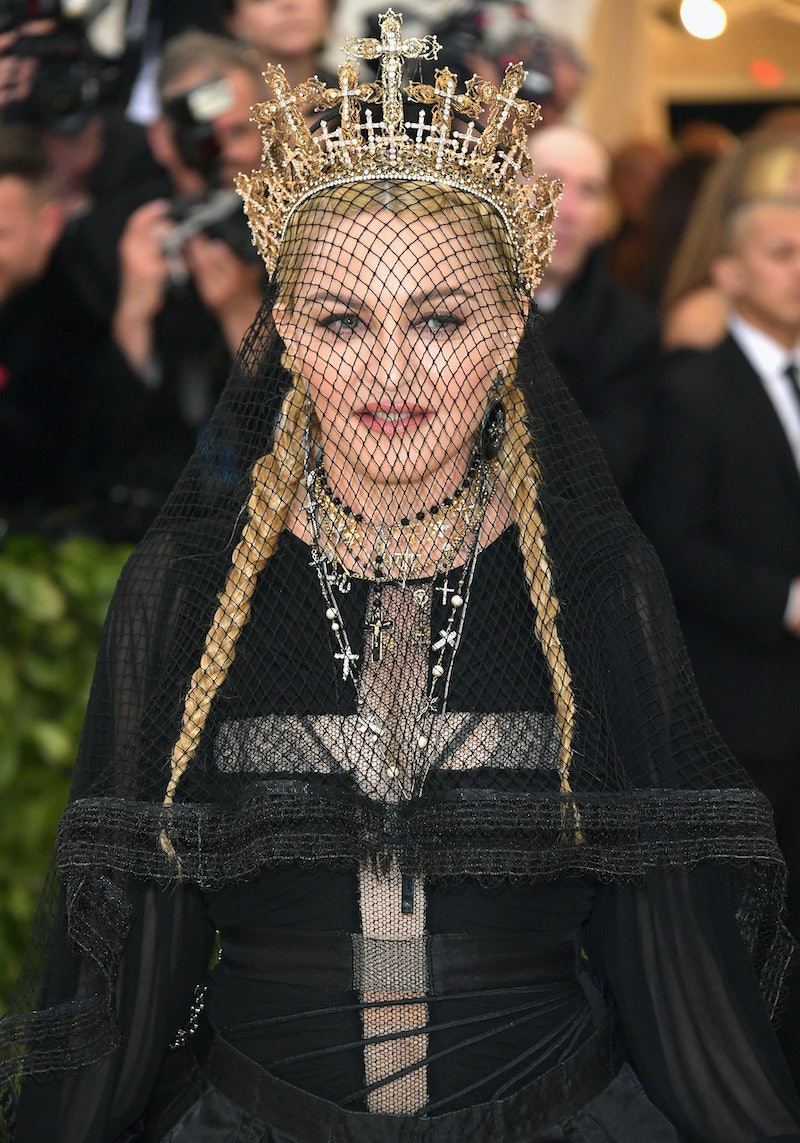 It wouldn't be a proper Met Gala without one of the event's most important and highly anticipated guests, Madonna. Every year, fashion critics and fans alike await for the icon to step out onto the red carpet and wow us all with her bold, jaw-dropping ensembles. However, it almost feels like this year's theme, "Heavenly Bodies: Fashion and the Catholic Imagination," was particularly tailored to the legendary musician. And if Madonna's 2018 Met Gala look doesn't make you think that, well then you are just not paying enough attention, my friends.

Madonna arrived on the Met Gala red carpet dressed in an all black ensemble featuring a black bodysuit with a sheer cross cutout on her chest, a floor-length skirt, and a black netted veil over an ornate crown. The entire look was designed by Jean Paul Gaultier, who also arrived on the red carpet alongside Madonna. The French designer and Madonna have had a long history with one another over the years — he was the one who designed her famous cone bra corset from the '90s, as well as many of her other iconic lingerie-inspired stage looks. It made complete sense then that the duo would reunite and work together again on such a nostalgic theme!

Madonna's hair was styled by Andy LeCompte and her makeup was done by Aaron Smith Henrikson, her official makeup artist. Madonna wore her hair in braids, topping them off with a beautiful crown. For her makeup, Henrikson created a smoky liner and bold brows. She looks nothing short of regal.

Madonna shared a time lapse video of both LeCompte and Henrikson getting her dolled up for the big event on her own Instagram page. "Even Queens need to eat. ............👑🙏🏼😇," she captioned the video, poking fun at the fact that she squeezed in some snacks while getting ready.

Before Madonna stepped out onto the red carpet tonight, she prepped her skin with her longtime esthetician Tarin Graham using products from her own line, MDNA SKIN. Bustle's very own Fashion and Beauty Editor Olivia Muenter had the chance to experience Madonna's pre-Met Gala facial and noted that her skin was totally transformed.

Ever since the beginning of her musical career, Madonna has incorporated her Catholic upbringing into her music and fashion. In an article about Madonna's history with the Catholic church on Refinery 29, writer Justin Ravitz walks us through every moment of the singer's relationship with the religion, from pairing rosaries around her neck with lingerie to dancing in front of burning crosses in "Like A Prayer." For these reasons, everyone knew that Madonna was going to slay the religious theme. According to the Met Museum, this year's theme was meant to "examine fashion's ongoing engagement with the devotional practices and traditions of Catholicism."

Madonna is not only attending the gala this year, but according to Page Six, she is performing at the event as well.