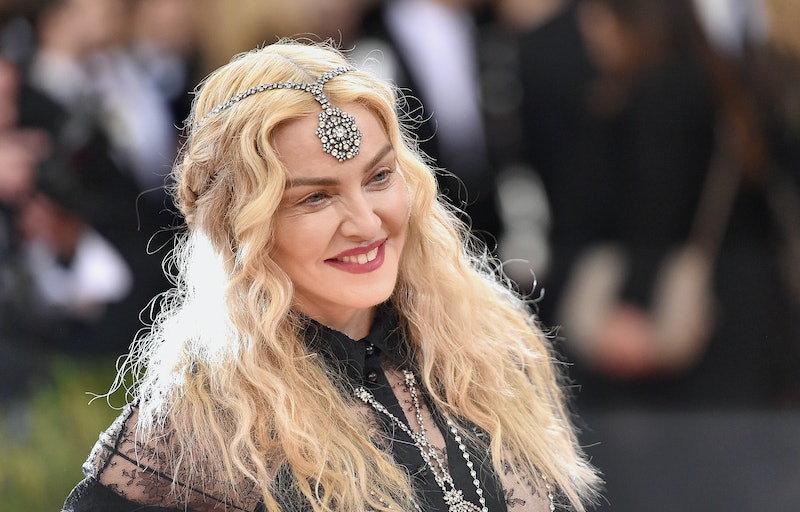 As you may already know, Madonna no longer lives in the United States of America. Her new home — or rather reportedly a mansion — is in Lisbon, Portugal. Without naming Donald Trump in a recent interview with Vogue Italia, Madonna hinted her move to Portugal was partially caused by the political climate in America — something she referred to as "not America's finest hour" in an interview with Vogue Italia.

Madonna spoke of one of her kids and said, "My son David, who is going to be 13 on Sept. 24, has wanted to play soccer professionally for years ... I’ve been desperate to get him into the best academies with the best coaches, but the level of football in America is much lower than the rest of the world."

"I saw his frustration," she added, "and I also felt it was a good time. I felt like we needed a change, and I wanted to get out of America for a minute — as you know, this is not America’s finest hour."

Speaking of her life as a "soccer mom," the iconic singer told Vogue Italia, "Any woman who is a soccer mom could say it kind of requires you to have no life in a way, because things change from week to week and games change from weekend to weekend — sometimes they’re in the city, sometimes they’re not, and we would never know until Thursday night whether they’re on Saturday or Sunday, if at twelve o’clock or later."

"It’s impossible to make plans, and then you feel like you’re not being fair to your other kids, or being fair to me," she added.

Some observers may raise their eyebrows at Madonna’s comments but the singer has been a vocal critic of Trump in the past. In 2017, Madonna said that she was “not surprised at all” about Trump winning the 2016 presidential election. She told Entertainment Weekly, “People should listen to me! Of course I’m saying I predicted it.”

Expanding on her supposed prophetic abilities, Madonna said, ”The winds were changing, and people were becoming more and more fearful and marginalized. I thought we were going backwards on a lot of the progress that we’ve made as the human race. So cut to my Rebel Heart [album] Tour and then the election and then what’s happened in the rest of the world — of course I’m saying I predicted it. I’m sure I’m not the only one."

After Trump won the 2016 election, Madonna gave a speech at the Women's March and said, "Yes, I’m angry. Yes, I am outraged. Yes, I have thought an awful lot about blowing up the White House. But I know that won’t change anything. We cannot fall into despair."

Now, in her Vogue Italia interview, Madonna said that she would be focusing on her children. "I don’t care what the vehicle is," she said, "I just want them to be good human beings that treat other human beings with dignity and respect, regardless of skin color, religion, [and] gender."