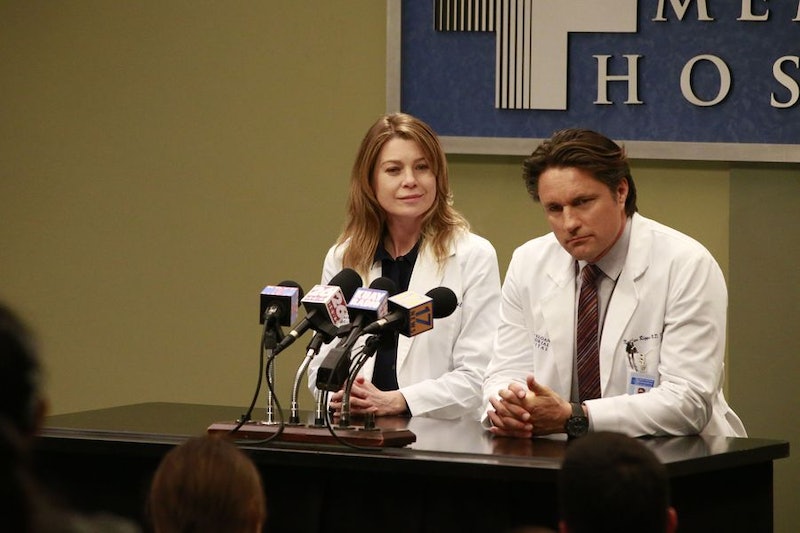 The thing that we all knew was going to happen has happened — Maggie found out that Meredith and Riggs got together on Grey’s Anatomy, and let’s just say that she is... not happy. To say the very least. Maggie’s been through a lot lately — her mother just died — and she’s feeling fragile, and she’s taking it all out on her half-sister. What’s uncharacteristic of Grey’s Anatomy so far, though, is that Meredith is fighting to get her sister back.

Meredith is the dark and twisty one on Grey’s Anatomy, so when everyone else falls apart, she shrugs it off like, “Hey, I have problems, too.” That’s true — she has a dead husband, two dead parents with whom she had a poor relationship, three kids, and an assorted array of half siblings and siblings-in-law who are messes in their own right. But this whole Maggie thing is different because Meredith isn’t going to let Maggie walk away. Maggie realizes that something was up between Riggs and Meredith during their press conference — they were just major heroes on a flight, which is, you know, a regular occurrence for these two — when Riggs gingerly touched Meredith shoulder and praised her skills. That’s a touch not of two colleagues but of two people who have seen each other naked.

Meredith and Riggs have seen each other naked a few times, first and foremost in her car in the parking lot of Grey Sloan. Riggs pursued Meredith, she shrugged him off because of Maggie, and now, they’ve decided to give it a go. Maggie, understandably, feels betrayed, especially when she finds out that this wasn’t a wham-bam-thank-you-Meredith-ma’am thing. Meredith and Riggs like each other, and Maggie feels so hurt by Meredith keeping it from her (and telling other people at Grey Sloan in the process) that she basically disowns Meredith. Maggie tells Meredith, “You were all I had left,” and then I wept salty tears for their relationship.

This is normally where Meredith would let things go, because Meredith is really not great in a crisis that’s not medical. She freezes, paralyzed by her own feelings. But here, Meredith recognizes that she’s “not going to lose her sister over some guy,” and she opts to take Maggie out (along with Amelia, who is always down for a good cry or a night out, it seems) on the town for some sisterly bonding time. Considering that Meredith could barely look Lexie in the face when she started at then-Seattle Grace, this is a big step in the sisterly direction for Meredith.

There are two questions now to be answered. The first is if Maggie will forgive Meredith for this. My guess is that she will. It could be awkward for a bit, but family is family, and Maggie doesn’t have much family left. The second is if Meredith and Riggs will stay this course, mostly because it’s kind of awkward for her relationship with Maggie. Again, I think it will be weird at first, but things will settle down. That is, until the next plane crash or trial or mass shooter or homemade Civil War-replica explosive device rolls into the hospital.

More like this
Julie Andrews Revealed A Surprising Behind-The-Scenes 'Bridgerton' Detail
By Grace Wehniainen
What Song Does Eddie Play in 'Stranger Things'? Metallica’s “Master Of Puppets” Ignites The Season 4 Finale
By Alyssa Lapid
'The Summer I Turned Pretty' Book Ending Is An Emotional Rollercoaster
By K.W. Colyard
The Future Of 'All Creatures Great & Small' Is Confirmed & Wedding Bells Are Ringing
By Rebecca Fearn and Frances Stewart
Get Even More From Bustle — Sign Up For The Newsletter