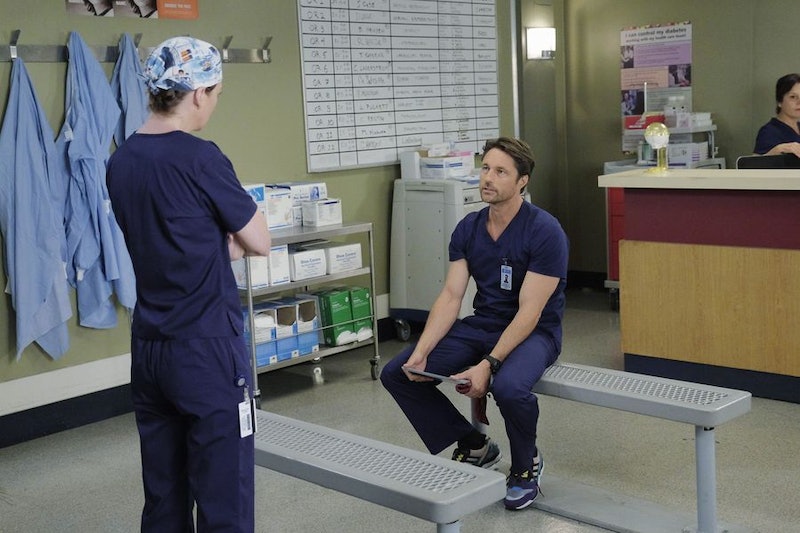 Just when you think Meredith might be able to bring a little happiness in her life on Grey’s Anatomy, something comes in to poop all over it. Sometimes it’s a circumstance, sometimes it’s a wayward friend, and sometimes it’s just the cruel hand of fate torturing her. I thought that Meredith and Riggs would make a good pair — they were always going tit-for-tat with each other, and that sort of energy is good for Meredith. She can’t be with someone she can steamroll. Will Meredith Grey and Nathan Riggs date on Grey’s Anatomy ? I think they should, but there’s a big sister-shaped object currently standing in their way.

In the penultimate episode of Season 12, Meredith and Riggs consummated their relationship in the back of her truck. Hey, whatever — sometimes, you gotta let your freak flag fly. I have to say that, following their coital activities, both Meredith and Riggs were much happier. Riggs and Hunt kind of made up (some of that had something to do with it being Hunt’s wedding day), and Meredith was more supportive to Amelia than she has been in… well, ever. So after these two basically made the wedding happen, Meredith was standing at the altar watching Amelia walk down the aisle, and Maggie whispered to Meredith that she really, really liked Riggs and she thinks that he really, really likes her, too. Meredith’s face was priceless and a half.

Oh, Shonda — just when the sister dynamic on the show has been softened (Amelia and Meredith were just like cats and dogs for a while there), it’s all about to get blown sky-high. Riggs is really the only guy on the show who is a match for Meredith (Alex and Mer are just not going to happen, guys), and Maggie really wants to find love. Maggie is as emotionally stunted as Meredith, so I can’t see her taking this well. Meredith needs to tell Maggie as soon as possible that Riggs is unavailable-ish. But she probably won’t, thus making a bigger mess than it had to be (typical Meredith). Can’t we all just get along in Season 13? I hope so.