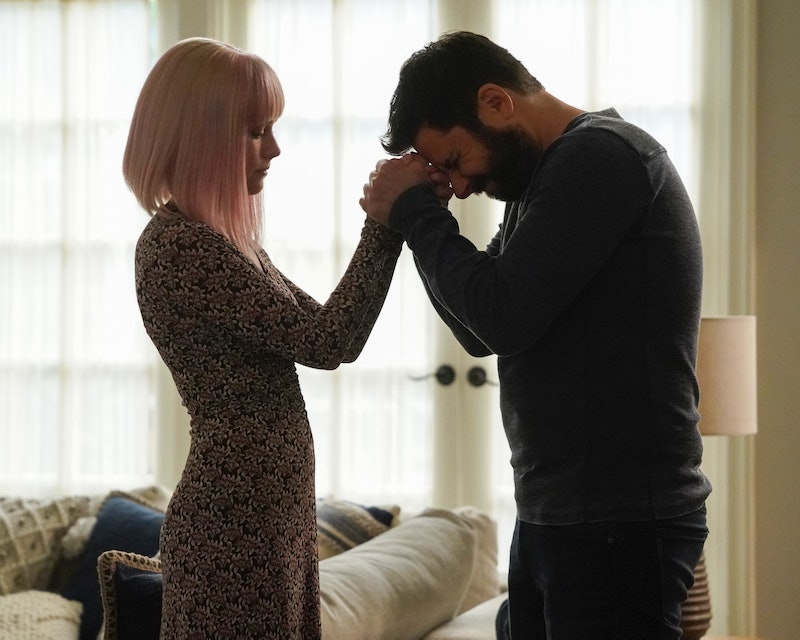 Fans of A Million Little Things know that the show is going to make them cry at least once an episode. It comes with the heartwarming, bittersweet television drama territory. But the upcoming episode looks even more devastating than usual. An exclusive sneak peek of the Oct. 31 episode of A Million Little Things reveals that Gary's dog Colin is missing. It's every pet owner's worst nightmare.

The clip shows Gary and his girlfriend Maggie rushing around the Boston streets calling out Colin's name in a panic. "Come on, man," Gary says in frustration when they can't immediately find him. It may be a fictional show, but it's such a real, heartbreaking moment for Gary — and Maggie too. Not just because Maggie also loves Colin, but because she's responsible for his disappearance.

The synopsis for the episode, titled "Unleashed," says that "Gary's growing tension with Maggie comes to a head as she accidentally lets Colin out while she’s on the phone with Eric." Maggie's relationship with Eric, the man with her brother's heart, has already been a point of contention for Gary. It won't help matters for Gary that Eric is now sort of to blame for Maggie letting Colin out. If they can't find Colin — or, worse — if something happens to him while he's running around the streets of Boston, Gary and Maggie's relationship may not be able to survive that.

All of that pain is written on Maggie's face as she searches frantically for Colin in the preview clip below.

Gary's pain is tangible too. Here's a man who so recently lost his best human friend in Jon — he can't lose his best dog friend too. Fans will have to tune in on Thursday to learn how the missing Colin situation will pan out, but the synopsis for the episode following this one suggests that the storyline won't be completely resolved. The Nov. 7 episode description says, "Maggie helps Gary make a difficult decision about his dog, Colin." Clearly the hits don't just come this week, and whatever devastation viewers feel on Thursday will carry right on in to the next episode.

If the clip alone is any indication, it's gonna be a rough time for Gary, Maggie, Colin, and fans of Gary, Maggie, and Colin. Everything begins Oct. 31 at 9 p.m. on ABC. Better get the tissues ready.